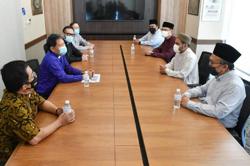 Azalia Zaharuddin (left), editor of 'The Tudung Anthology', speaking on a panel at the launch of the book at last year's Arts for Grab event in Kuala Lumpur. Photo: Azalia Zaharuddin

“The Generic Nusantara Men had snakes in their crotches, often asleep, but easily awakened at the sight of women’s hair. The snakes’ bite would scar you or curse you to be ugly, and that is why you must wear tudung (headscarf or hijab), the Elder tells the younger woman.” Loosely paraphrased from “Rambut Medusa” by Steff Fleur, cautionary tales like this of how the veil protects women from beastly male lust are something most Muslim girls have heard before.

But as the other writings in the Tudung Anthology show, the issue of that piece of cloth covering Muslim women’s hair is complicated, and most often not as fantastical as the fable.

Each wearer’s and non-wearer’s relationship with that ubiquitous symbol of religious identity is personal, spiritual and often unique, while at the same time intricately interwoven with society’s expectations.

Creating a platform for these different experiences and voices is the main idea behind the women-only anthology, says its editor Azalia Zaharuddin in an online interview: “We wanted to hear the thoughts of Malaysian women and their stories about their experiences with the tudung.”

The stories in The Tudung Anthology show that the headscarf is more of a women’s issue than a religious one, says anthology editor Azalia. Photo: Azalia Zaharuddin

Azalia, 25, believes the tudung is an ongoing issue for Muslim women, especially on social media.

“It is always being talked about. For example, there are world class athletes shunned just because of what they wear and it seems that all of women’s achievements are only judged on that basis.

“That’s why we thought it was important to share these stories – to give an insight into and understanding of what lies behind a person’s choice,” she says.

Reading these stories, you will realise how difficult the decision to wear, keep or discard the tudung really is, and how much suffering, and hurt, and joy comes with it, she adds, referring to one of the entries, “Tattoos And Tudung” by Shaf Ghani.

“It talks about this transition and struggle but people only see what’s on the surface. When men do the judging most of the time, how can women’s voices be heard?”

The struggle is also captured brilliantly in “Meaning” by Anony-mous in this line: “It is complicated ... (and) not a clear ruling. But to be safe, one should just wear it. In a way, it is choosing the lesser evil.”

Azalia says she has also had to deal with her own issues concerning the tudung.

“And knowing how much Malay women are always being judged by it, it did feel like a necessary thing to talk about,” says Azalia, who cut her teeth writing short stories in primary school (and renting them out to her classmates for 20 sen each!).

She also writes poetry when she is not studying and researching languages at a Japanese university. The doctoral student also freelances as a travel writer at travel portal Taiken Japan. Her first short story was published in indie publisher Matahari’s Letters To Home in 2016.

Azalia feels that her time in Japan has given her a different perspective on the tudung issue.

“I’ve lived in Japan for over four years now. Sure, during the first year, I was afraid of how they’ll treat me because I’m ‘different’ and thought perhaps not wearing the tudung was easier because I could assimilate better....

“But then I remembered that if God is on my side, I don’t have to worry about what other people think.”

Instead, she shares, having a visible Muslim identity makes her feel like she is part of a wider world.

“It is an amazing feeling when other Muslims can easily recognise you and greet you like you’re a long lost relative.

“And not only Muslims. A Chinese family once saw me in Seoul and, from a few feet away, said ‘Malaysia! Malaysia!’ I think they recognised me from my tudung style.”

Then there is the growing Muslimah industry – according to a 2016 report by Thomson Reuters and DinarStandard, Muslim women worldwide spent US$44bil (RM176bil) in modest clothing in 2015. And J. Walter Thompson Intelligence’s The New Muslimah: Southeast Asia Focus survey last year of 1,000 Muslim women in Indonesia and Malaysia showed that the vast majority own at least 10 hijabs, with 85% of younger women owning 10 or more.

Azalia thinks the industry’s growth is great, as it opens many doors for young Muslim women.

“Prior to this, I think girls felt they had to choose between wanting fashion and following religion. But with the industry growing, Muslim women who wear the tudung feel like they have more opportunities. Celebrities like Neelofa, Yuna, and Vivy Yusof show them that they can be successful without sacrificing their beliefs.”

Over 70 stories were received for the book, she says; around 40 of them were about how in-laws expected the writers to wear the tudung after marriage.

“It really shows the kind of expectation that society puts on Muslim women.

“I can also say that most of the contributors were much older women, but through their stories, the younger women will be able to delve through their struggles with this tudung question.”

The opening of “Meaning” in particular really impacted her, she highlights.

“It reads: ‘When I found out that the child I was carrying inside me was a girl, I cringed a little. Because I would have to make the tudung decision for her.’

“I thought it was powerful, as at one point in a Muslim girls’ life, one way or another, she is going to face the tudung situation, at least in the Malaysian context,” Azalia says.

For a young Malaysian woman like her, Azalia notes, getting a glimpse of what other women have faced and are facing can be very comforting.

“It is important for us to know that we are not alone in this matter. It is also comforting to know that others have been through it before and we’re going to be just fine.”

She feels there are many misconceptions when it comes to Muslim women and the tudung.

“It is so easy to judge a woman by her clothing; there are so many stereotypes, and it can even depend on what type of tudung we wear. Tudung labuh (big, loose headscarf) – ‘oh she’s an ustazah (female religious teacher)’.

“Yet either way, both are expected to be ‘perfect’ versions of Muslimah, and that’s why there is so much pressure, because they aren’t allowed space for mistakes like normal people.”

Muslim women who don’t wear the tudung meanwhile are seen as “lesser Muslims”, she adds, pointing to “Belum Muslim” (Not Yet Muslim) by Alina Burner in the anthology.

“The stereotype is ‘No tudung: Oh, she must be a wild one’. People assume they are less caring of their religion and its beliefs.

“But regardless of tudung or no tudung, whatever our clothing choice, women should be respected, and I think that this book can provide some insights into promoting that understanding.”

As Azalia sees it, in any issue, there will always be differing views.

“Everyone is always going to disagree on things or have different opinions about something, and that’s all right for sure.

“To me what’s more important is understanding why they stand on that side of the fence, not trying to force people to come over to where we are standing.”

What surprised her most when working on the book is the diversity of voices it gathered – from Muslims to non-Muslims, and those who wear the tudung and those who don’t.

“Although the tudung is normally associated with Muslims, through this anthology readers can see how it is more of a women’s issue than a religious one. And that’s why I believe these stories need to be heard,” she says.

“What I got out of it all was a humbling experience. It gave me a greater empathy for women with different opinions, and I hope readers will have the same experience – that they will be able to at least understand women’s decisions and stances on the tudung.”

'The Tudung Anthology' is published by Matahari Books and is available in major bookstores nationwide. 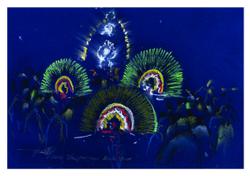