'Expressive times': US publishing industry an open book in 2022 Simon & Schuster's corporate parent officially ended the agreement for Penguin Random House to purchase the publisher in late November, a proposed sale a US federal judge already had blocked a month before. Photo: AP

In 2022, the story of book publishing was often the industry itself.

Penguin Random House's attempt to purchase Simon & Schuster ended up in a Washington, DC courtroom, as the Department of Justice prevailed after a three week antitrust trial last summer that also served as an extensive, often unflattering probe into how the business operates.

In November, some 250 HarperCollins union employees went on strike, their calls for improved wages and benefits and greater workplace diversity amplifying an industry-wide discussion over the historically low pay for entry- and mid-level workers.

And throughout the year, social media was the meeting ground for observations and revelations on the trial, the strike and other issues the publishing world once confined to private gatherings. Authors posted their book advances, agents criticised HarperCollins and other publishers, and editors shared their year-by-year salaries. Some staffers, such as former Macmillan editor Molly McGhee, announced on Twitter last March that they had had enough and were quitting.

In her resignation letter, McGhee cited "the invisibility of junior employees’ workload” and alleged that "many executives in the publishing industry are technology illiterate” and dependent on their assistants.

"I have a theory that publishing is at a very important decision point where it has to decide whether it wants to continue moving forward with 20th century ideas or if it wants to join other businesses and go into the 21st century,” McGhee, 28, said recently. "And I think it's very hard for them to make that transition.”

"There are very important conversations going on that would not have come out publicly when I was starting out,” said Kate Testerman, founder of the KT Literary Agency. "The only people that you could talk about what was going on with were co-workers or your friends.”

Despite the phenomenal success of novelist Colleen Hoover, the number of books sold dropped around 6% from the historic highs of 2021, according to NPD BookScan, which tracks around 85% of hardcover and paperback sales. Publishers cite the lessening of pandemic regulations and more people leaving their homes as a factor. But the numbers are still above the last pre-pandemic year, 2019, and the power of literature remains high, not just in the minds of the book community but among government officials and political activists.

Assistant Attorney General Jonathan Kanter, responding last fall to the US District Court's decision to block the Penguin Random House-Simon & Schuster merger, said that the proposed deal would have "diminished the breadth, depth, and diversity of our stories and ideas, and ultimately impoverished our democracy.”

Conservatives, meanwhile, continued their efforts to pull books from school and libraries, with Missouri alone targeting nearly 300, from Margaret Atwood's Dystopian The Handmaid's Tale to a Manga edition of Shakespeare's Hamlet. The American Library Association reported surging levels of attempted bannings, especially books with racial and LGBTQ themes, and widespread harassment of librarians. A prominent advocate for removing books, Moms for Liberty, defines its mission as defending "parental rights at all levels of government.”

In some ways, book publishing is still an outlier from other arts and entertainment industries. Video and music stores are mostly gone, but physical bookstores have endured despite the growing size and power of Amazon.com; the American Bookselling Association, the trade group for independent stores, is reporting its highest membership in decades. Publishing also remains high-minded compared to music or movies or sports, the kind of industry where executives such as Hachette CEO Michael Pietsch stated, under oath, during the Penguin Random House trial that agents don’t lie to them.

"It would be devastating (if they did),” said Pietsch recently. ”We have an industry that operates pretty much on trust."

But otherwise, says Penguin Random House US CEO Madeline McIntosh, the industry no longer stands apart from larger trends - whether inflation and supply chain delays, or questions about diversity and working conditions. She and others cite the pandemic, the Black Lives Matter movement and social media, along with the emerging influence of younger employees.

"Some of us are sounding like the older generation during the rise of the hippies, where we’re like ‘Kids these days, what on Earth are they up to?’” McIntosh, 53, says. "Given the state of the world today, it’s completely logical that Gen Z is determined to change the status quo. This may be one of those generations that leaves a stamp on culture for a long time.”

Karp sees the current moment as a coming of age for Gen Z not just within publishing houses, but on best seller lists, with Hoover's It Starts With Us, Jennette McCurdy's memoir I'm Glad My Mother Died and rom-com fiction such as Tessa Bailey's Hook, Line and Sinker among many works benefiting from the enthusiasm of younger readers.

Karp, 58, himself knows how generations can differ: After Simon & Schuster announced it was publishing former Vice President Mike Pence's memoir So Help Me God, released this fall, younger staff members confronted him during a virtual town hall meeting, objecting to Pence's service in the Trump administration and his conservative stances on gay rights and other issues. Some were openly unhappy with Karp's response that Simon & Schuster was committed to publishing a range of political views.

"They wanted to hear answers and they deserved answers,” Karp said recently. "I don't think there's anything wrong with questioning your work culture.”

Over the past few years, employees have challenged and upended traditions that endured for decades or more, even to the very origins of American book publishing - that a politically liberal culture, committed to the broadening of the public mind, was itself predominantly white; that the vitality of publishing's mission - and the glamour of New York literary culture - compensated for low pay (usually under US$50,000, approximately RM220,000 for new hires) and long hours that forced some staffers for years to live at home or share apartments with multiple roommates.

"There was an understanding that you've got to prove your commitment. That if you stick it out, then you'll see the money. Just get through the first five years,” says Rachel Kambury, 31, a HarperCollins associate editor currently on strike. ”I feel now like the lid is off on so many issues that had been prevalent in publishing."

"I’ve gotten to see a lot of young people in recent years and they have such a different sensibility and vocabulary,” says young adult author Maureen Johnson, 49, whose books include 13 Little Blue Envelopes and the upcoming Nine Liars, part of her Truly Devious series.

"I feel like they’re not kidding around. They have a sense of worth of themselves as people and a sense that it doesn’t have to be this way.” - AP 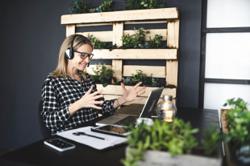