'I want the book to be a positive influence for the readers. I want them to know that it's okay to do things for yourself. You can go fight for your dreams,' says Jung. Photo: Handout

As a member of South Korean group Girls' Generation, Jessica Jung made a name for herself in the highest echelons of pop royalty. Having since gone solo (she left the group in 2014) and launched a fashion line, with plans to open a flagship store in Seoul, Jung is now taking readers on a journey to stardom in her debut YA novel, Shine.

Released recently from Simon & Schuster Books for Young Readers, the novel tells the story of Rachel Kim, a Korean-American trainee at an entertainment company in Seoul working hard to get the chance to debut as a K-pop star.

Rachel's road to success is filled with performances, friendships, cattiness and romance, splashed with a healthy dose of reality as Jung weaves fact and fiction throughout to share insights into the highly competitive world of K-pop.

Writing a book is the latest turn for you in your multifaceted career. What inspired Shine?

I always thought my life wasn't normal. It was very unique. As much as it can be very glamorous and pretty on the outside, there can be a lot of drama, a lot of sacrifices. I felt it was time for me to tell the story. I wanted to show the readers how it began, where it all started. Take them step by step through the process, behind the scenes, things they don't know. Because you can see the career and how it goes, but you never really know what happened before that. I'm from San Francisco, so I thought that part of the story would be interesting for the readers to read, especially in the Western world.

Rachel's a reflection of me, but I don't want it to be like,"Oh, it's an autobiography." I'm actually a fan of YA novels. I want to speak to younger audiences, because these days a lot of people want to be K-pop stars, or pop stars, or YouTubers. Rachel and I are very similar, but I did fictionalise everything. But I hope it will be an Easter egg hunt for people. I want them to find clues along the way, figure out who's who, what's what, have fun with it and enjoy it. 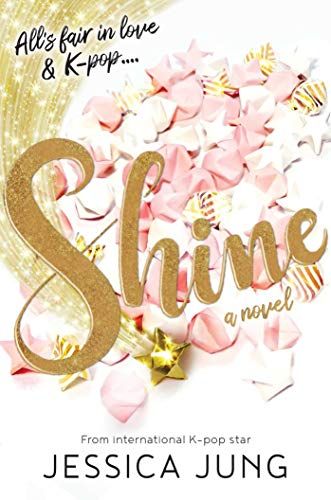 How did you writing a book compare with other aspects of your diverse career?

The entertainment industry is very quick, but the book world seemed very relaxed. They plan way ahead of time. One thing I learned was that it's really hard to let go of the copy. The revising and proofreading process... It was fun, but I didn't want to let go.

You're the first K-pop star, to my knowledge, that has written a novel based on your life and career. How does that feel?

As an American, I was raised to be independent, take action, have a voice, be responsible, not to be afraid to speak up for myself. It's funny but I do things before others do it. I think it's part of my personality as well.

What made you decide to keep some of the Korean untranslated, featuring it either romanised or in Hangul?

That was the unique part of my book. I thought, now that the world is embracing not only K-pop but K-beauty, K-dramas etc, people might want to learn Korean. So if I pop some words here or there, people might look it up or take interest in it.

Like you, Rachel's family moves to Seoul so she can pursue her dream, resulting in complex interfamilial dynamics. Was this true to life?

My mum was always very supportive, but on the outside very strict. In the trainee years, I could only go during the weekends. I had to study during the week. It was hard for me to focus on being a trainee like the rest. And my relationship with my sister (actor-singer Krystal Jung), I really wanted it to be exactly how we are. She picked the name for her (corresponding character in the novel). It was something else and she was like,"I want to be 'Leah.'"

The book explores the disparity and bullying between and among trainees, and mistreatment of female stars versus male ones. Do these represent your experiences?

Definitely. And it still goes on. I think it's only natural. It's a very competitive world out there. It's something that people don't really like to talk about, but I thought bringing it up in fiction would be a great way to let people know it all exists in this world. Koreans in general, they're very conservative in every way, so it's not easy to really speak up. It can be very sensitive. But I think I was brave enough to do that.

Do you have any concerns that Shine will ruffle some feathers?

No, not at all. It's fiction, right? I'm excited for the readers around the world to read it, get some insight and fall in love with the characters.

What would you like readers of Shine to come away with?

"Smile like the whole world is your best friend." I get very emotional when I hear it. I love it. It has a lot of meaning behind it. You have to always be happy and smiley. Nothing is wrong, nothing can ever go wrong. You need to hide a lot of feelings behind your smile. And that's what I went through when I was young. That's what I learned to do. That's something that can be a weapon, actually. That's how you can protect yourself. I want the book to be a positive influence for the readers. I want them to know that it's okay to do things for yourself. You can go fight for your dreams. You don't need to look back. It's okay to find your voice and speak up for yourself. And I just want it to be a good read. - Reuters Scientists have evidence that some cave art was inspired by hallucinogenic plants
Ritual of listening: Sleevenote is a premium audio player for fans of album artwork
Melaka-based cultural activist gives Kristang language folk songs a global audience
The visual art world mourns the death of football great Maradona
London's National Gallery is charging a fee for a virtual tour of its 'Artemisia' exhibition
A list of picks to check out at this year's virtual George Town Literary Festival
Playful book about The Beatles wins major non-fiction prize in Britain
Online show 'Nadirah' attracts 1,500 viewers from 26 countries, returns for encore
Lifting spirits: why everyone needs a dino comic every day
Do collectors buy art from online viewing rooms?