While most music festivals have been cancelled in reaction to the coronavirus pandemic, a new entertainment complex will display "the theatrical, interactive artwork synonymous with these events" in Las Vegas, Nevada. The 930sq m open-air gallery, known as Art Island, will tentatively make its debut in September as part of the new entertainment complex and "immersive bazaar" Area15.

The permanent art gallery will feature around 10 festival-style artworks by international artists like Michael Benisty, Davis McCarty and Ivan McLean, some of whom have presented their work during past instalments of Burning Man in Nevada's Black Rock City.

Among them are the mirrored 4.2m sculpture of a couple embracing, called In Every Lifetime I Will Find You, which Belgian artist Michael Benitsy exhibited at Burning Man in 2019.

Also on view in Art Island will be OMAH by Portland-based collective Alchemy Arts, Pulse Portal by Davis McCarty, as well as Giant Disco by Ivan McLean.

"At Art Island, we intentionally created a permanent showcase for these extraordinary pieces. After all, what seems a more fitting, organic home for this sort of spectacle than Area15 - in the shadow of the over-the-top Las Vegas Strip?" said Winston Fisher, the chief executive of Area15, in a statement.

The artworks on view in Art Island will also be available to purchase, with the Art Newspaper reporting that prices range between US$100,000 (RM421,000) and US$300,000 (RM1.2mil). They will rotate when sold or after around six months to enable prospective clients around the world to discover and connect with new artists.

"Art Island acknowledges the growing audience for this burgeoning, outdoor art form distinctive for its accessibility and ability to create new art enthusiasts. Here, for the first time in an urban setting, will be a place where collectors and lovers of visual culture alike can walk among this monumental artwork in a setting unlike anywhere else," added Michael Beneville, the chief creative officer of Area15 and the chief executive of the New York-based creative agency Benneville Studios. - AFP 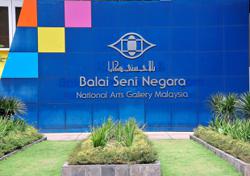