While some museums have had to cancel or postpone long-planned exhibits because of the coronavirus, organizers of a Van Gogh show in Toronto had a novel idea: offering art lovers a drive-in option. "Of course, because of Covid, we had to think creatively," said Corey Ross, a co-producer of the exhibit, which was initially slated to start in May and was delayed by the pandemic.

As Canada's largest city gradually comes out of lockdown, the exhibit began last week with two viewing areas in a huge Toronto warehouse: one area with social distancing circles on the ground for those who prefer taking in their art on foot, and another for people in cars that drive right into the building.

Viewing art from inside a car provides a safe experience for people who are physically fragile, fearful of the virus or vulnerable. And it is a unique experience, said Ross.

"You've never had an experience like this in your car," said Ross. "The feeling is almost as if the car is floating through the art."

The show was set up in collaboration with the creators of Van Gogh, Starry Night, a hugely popular exhibit presented last year at l'Atelier des Lumieres in Paris.

Cruising in a Plymouth

The Toronto show features a similar, digital concept: works by the Dutch painter are projected in high definition on walls and floors.

The warehouse has space for up to about 10 cars at a time, parking in designated spots.

Car engines stay off during the projection of the artworks, which is accompanied with music. The paintings are positioned so people can see them through their windshields.

Some people take photos with their kids in their lap as they spend 35 minutes in the bold, intense world of Van Gogh. 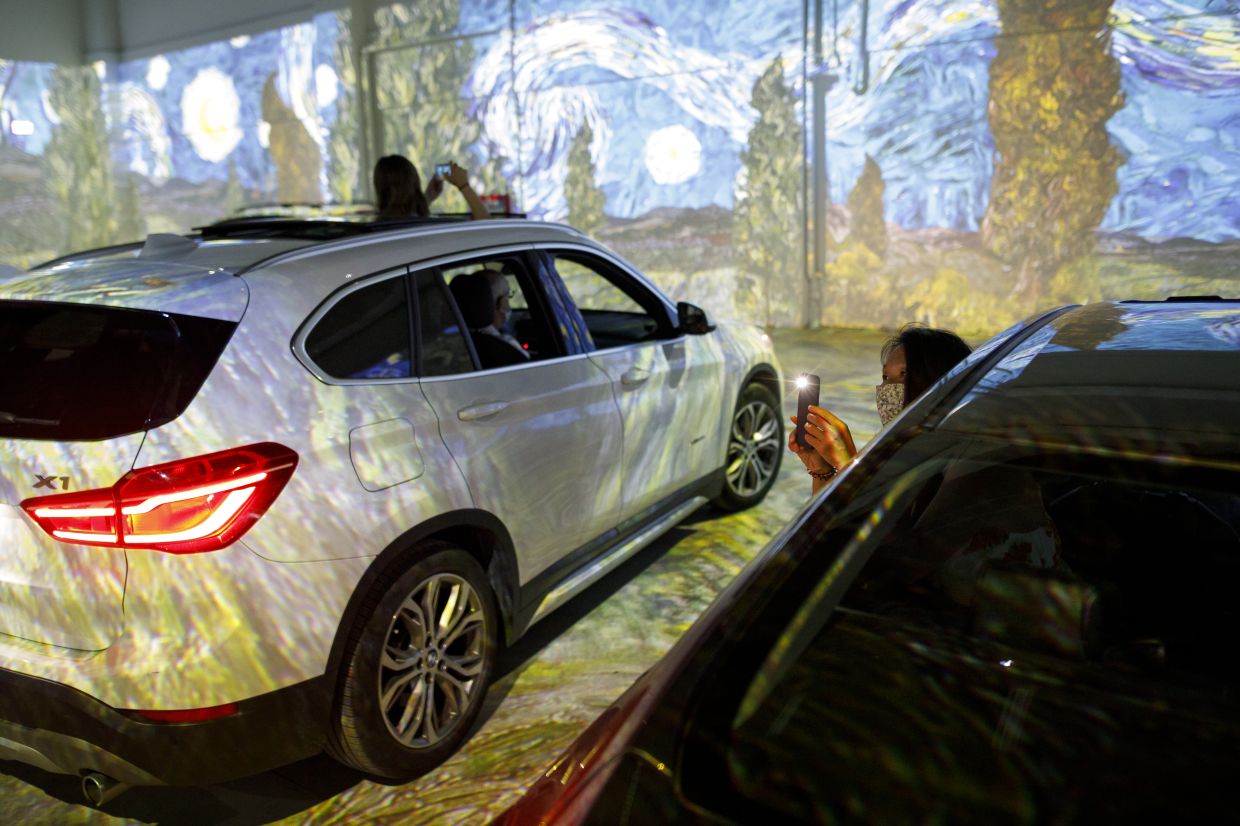 The warehouse has space for up to about 10 cars at a time, parking in designated spots. Photo: AFP

Jessica Counti, 17, came with her family for the first drive-in edition last Friday to celebrate her sister's birthday.

"It's just a really immersive experience that you can't really get in a regular art gallery. So I really appreciate that, even though we can't walk around art pieces," she said.

Another visitor, Patrick Corcoran, took in the show from the steering wheel of his vintage 1950 Plymouth.

"The whole thing of sitting in your car and being out and enjoying the art - it was comfortable, it was safe. With all the stuff that's going on in the world with the Covid, it was an experience. It was great."

Ross said the idea is turning out to be a hit but will just be temporary.

"If you're a car enthusiast, it's a very special moment," he said.

"But I think overall as soon as there's an opportunity for the public to go back to experiencing art in the way that we love to, in groups, beside other people, where you can talk and see strangers and see how they react and be part of a community, I think we will go back to that," Ross said.

The art hall for cars is booked almost solid through its end on Aug 9.

The show will remain open to pedestrians through September. - AFP

‘Lumbung’ for the world: Indonesia’s Ruangrupa on Documenta and the pandemic

What do you do with your kid’s drawings?