(From left) The Carpet Merchant Of Konstantiniyya, Shen Ming, My Giant Nerd Boyfriend

If the recent Comic Art Festival Kuala Lumpur (CAFKL) in Petaling Jaya was anything to go by, Malaysia definitely has an abundance of comic book talent.

From webcomic artists to illustrators, manga art to simple doodles, there was such a huge variety of comic book art on display at CAFKL that it makes one wonder why you’ve never seen their work outside the event hall before

Sadly, that is a problem most comics creators in Malaysia tend to struggle with – the fact that there are not enough companies that publish comic books.

“Talent, we have a lot. Look at all these booths,” said veteran comics artist Remy “Eisu” Mokhtar, who had his own booth at CAFKL.

“The market is over-saturated now, with a lot of talent but not many venues to publish. That’s the problem we have in Malaysia right now, because there are not enough comic companies to publish the books.”

“Events like these are good because it allows us to come here and sell our own self-published books, but there’s only so much we can sell in these sorts of events.”

Eisu, who has been working in comics since 2001, said that when he started out, there were still comic magazines like Apo?, Gempak and Ujang around to help comic artists sustain a living. 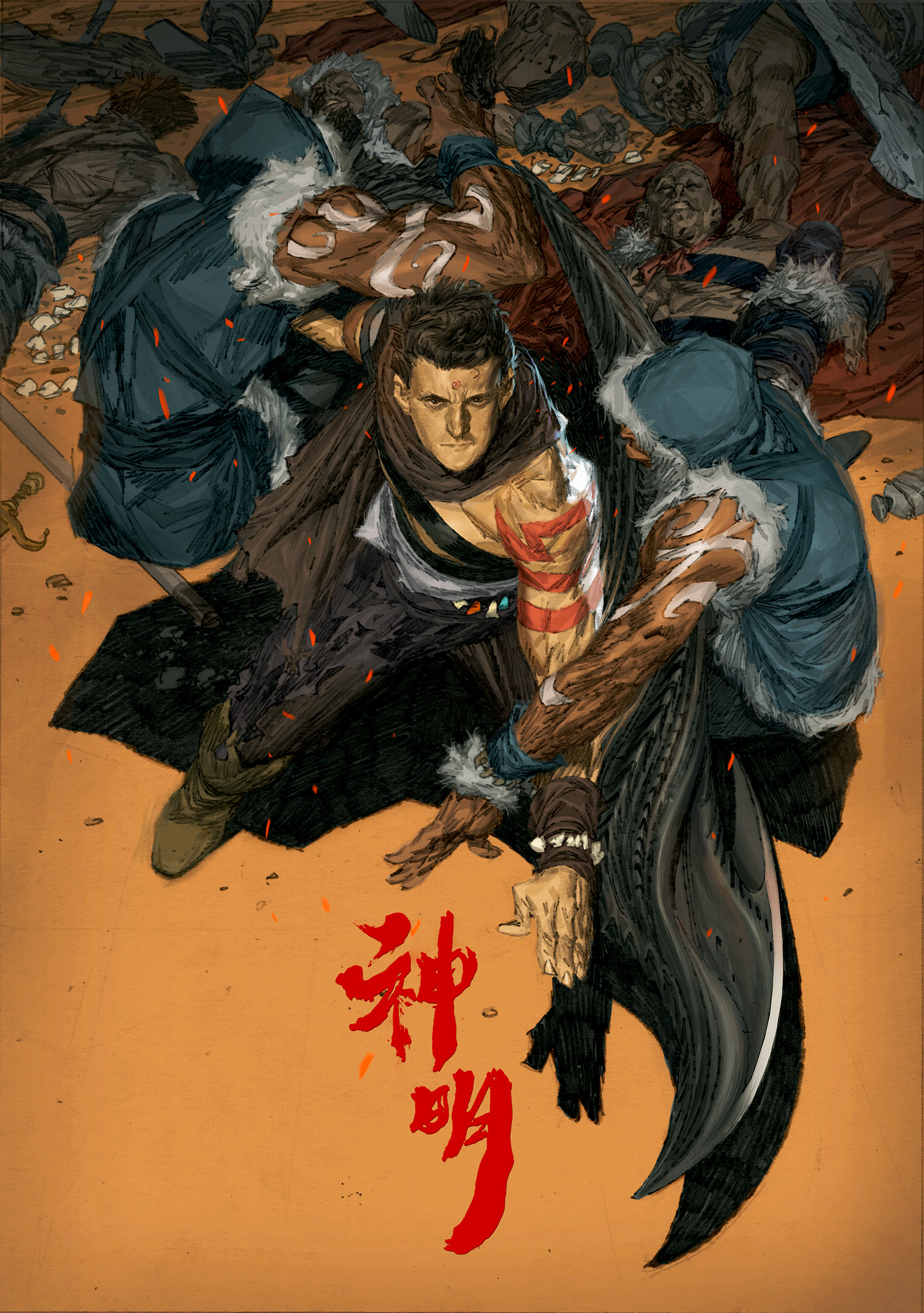 “But sales for these magazines have gone down now, so they had to branch out. For instance, Gempak has more entertainment articles than it does comics these days, because that was the only way they could sell magazines. There are still some comics, but because they had to scale down the comics section, they can’t accept everyone who applies.”

These days, there aren’t many local publishers of comics in Malaysia. One of the more successful ones is Maple Comics (pronounce ma-play, not may-pel), which has a good lineup of local comics ranging from original graphic novels to compilations of popular webcomics.

So what is a Malaysian comics artist to do to make ends meet then? Venture outside of Malaysia, of course.

There are already a number of Malaysian comics creators whose reach have expanded beyond our shores and into overseas markets.

And let’s not forget Seremban-born Singaporean Sonny Liew, whose critically acclaimed The Art Of Charlie Chan Hock Chye won three Eisner Comic Industry Awards last year, and previously got nominations for Wonderland (2007) and Liquid City (2011) while he was still a Malaysian citizen.

Eisu himself has been able to find work outside of Malaysia, which he says is essential for him to make ends meet. 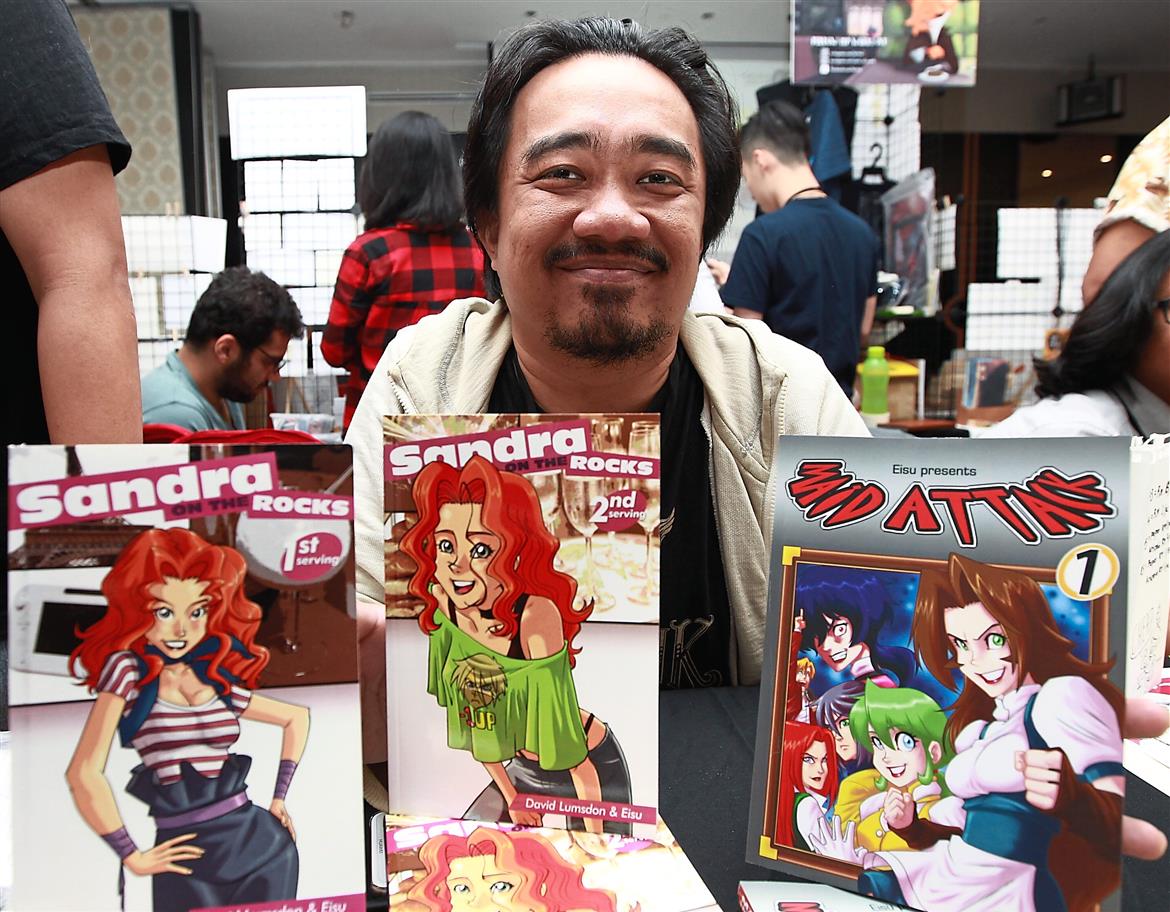 Eisu reckons being able to find work outside of Malaysia is crucial to being a full-time comics artist here. Photo: The Star/Norafifi Ehsan

“I actually quit my full-time job last year to try full-time comic-making. I’ve been at it for a year and three months, and so far, I’ve managed to get enough to pay my bills, and not owe anyone money!” he said with a laugh.

“But I had to look for jobs outside of Malaysia, I don’t think I would have been able to sustain myself if I only did jobs in Malaysia.

Another way for Malaysian comics to go international is through webcomics, though Eisu reckons a comic needs to be really really popular before it can make money.

“You can get money through advertisements, but for that, your comic has to be super popular. Otherwise you still won’t make enough money,” said Eisu, who has a webcomic called No Pink Ponies which he has been publishing since 2006, and gets him around US$100 (RM400) a month through ads.

Well, not every webcomic can be like Fishball’s My Giant Nerd Boyfriend, which has become one of online comic portal Webtoon’s biggest hits. It’s led to the petite artist (whose comic is mostly about her relationship with her 199m-tall geek boyfriend) making appearances in international comics conventions, one of the most recent ones being the Chicago Comic And Entertainment Expo in April. 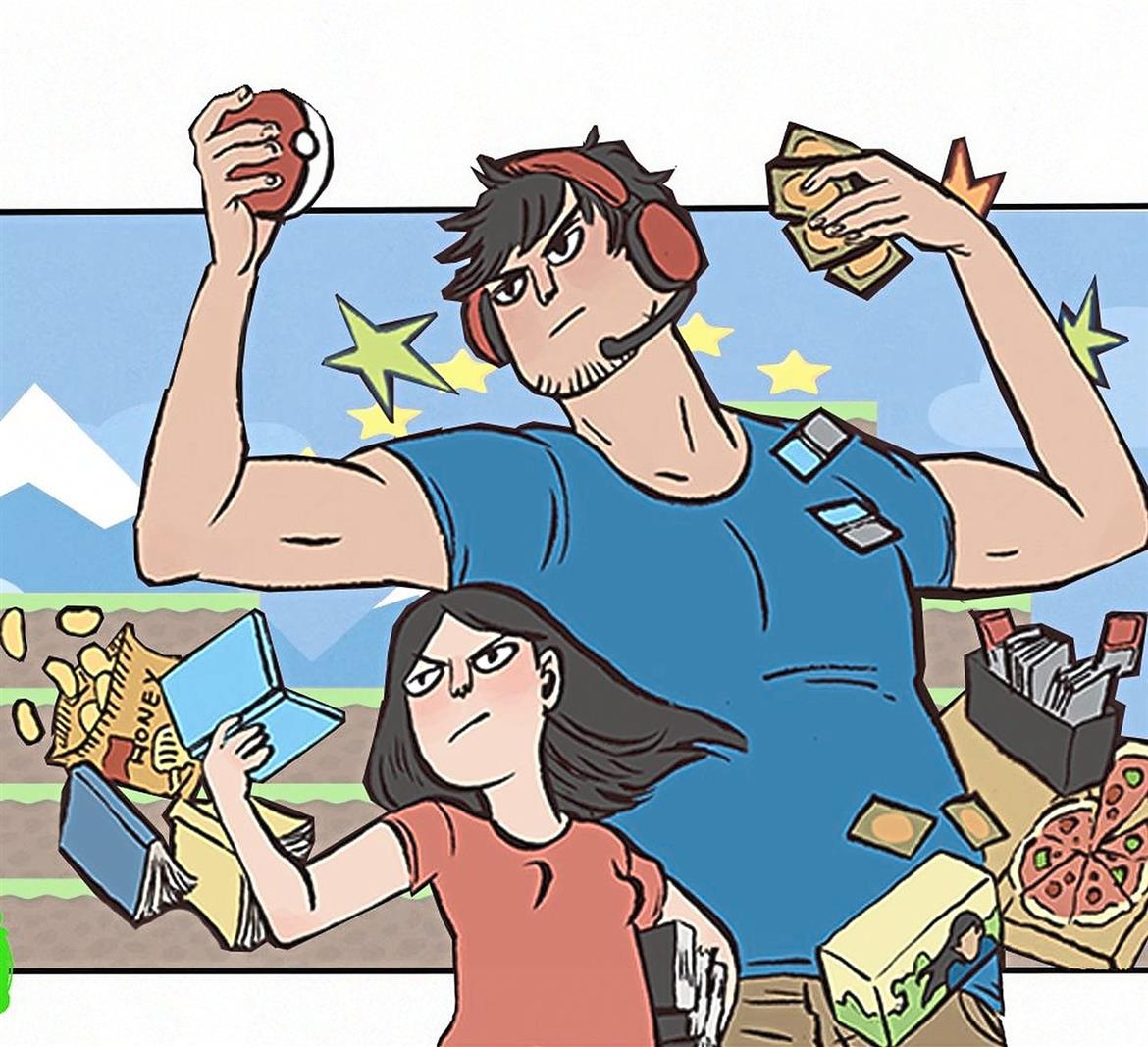 Fishball's My Giant Nerd Boyfriend is one of the most popular webcomics on online comics portal Webtoons. Photo: Fishball

One of the highlights of CAFKL was an eye-opening talk by comics creators Julian “Lefty” Kam and Tan Eng Huat about their experiences working on comics in China.

Lefty and Tan are currently with Left Pocket Studio in Shanghai, working to create and develop comic book intellectual properties (IP) for the Chinese market.

The 49-year old Lefty is a veteran Malaysian comics artist who has worked at major publications such as MOY Publications, Gempak Starz and Storm Lion in Singapore, and is best known for the Major Zombie series, which was awarded Best Comics Series and Best Independent Comics at the 2012 Malaysian Comics Society (PeKOMIK) Awards.

Tan, on the other hand, is one of the first local comic artists to make it to the big leagues of mainstream Western comics, starting in 2001 with a stint at DC Comics drawing Doom Patrol, which earned him the Russ Manning Promising Newcomer Award at the 2002 Eisners. He has also worked on other DC books such as The Authority and Justice League Of America (for which he gained another Eisner nomination, for Best Penciller and Inker in 2004), as well as Marvel’s Ghost Rider, Silver Surfer: In Thy Name, X-Men: Legacy, and Deadly Hands Of Kung Fu.

The Malaysian duo’s China adventure began when Tan was hired first by Left Pocket Studio Shanghai to develop a new comics IP. “I came along as they decided to expand,” Lefty said in an interview. 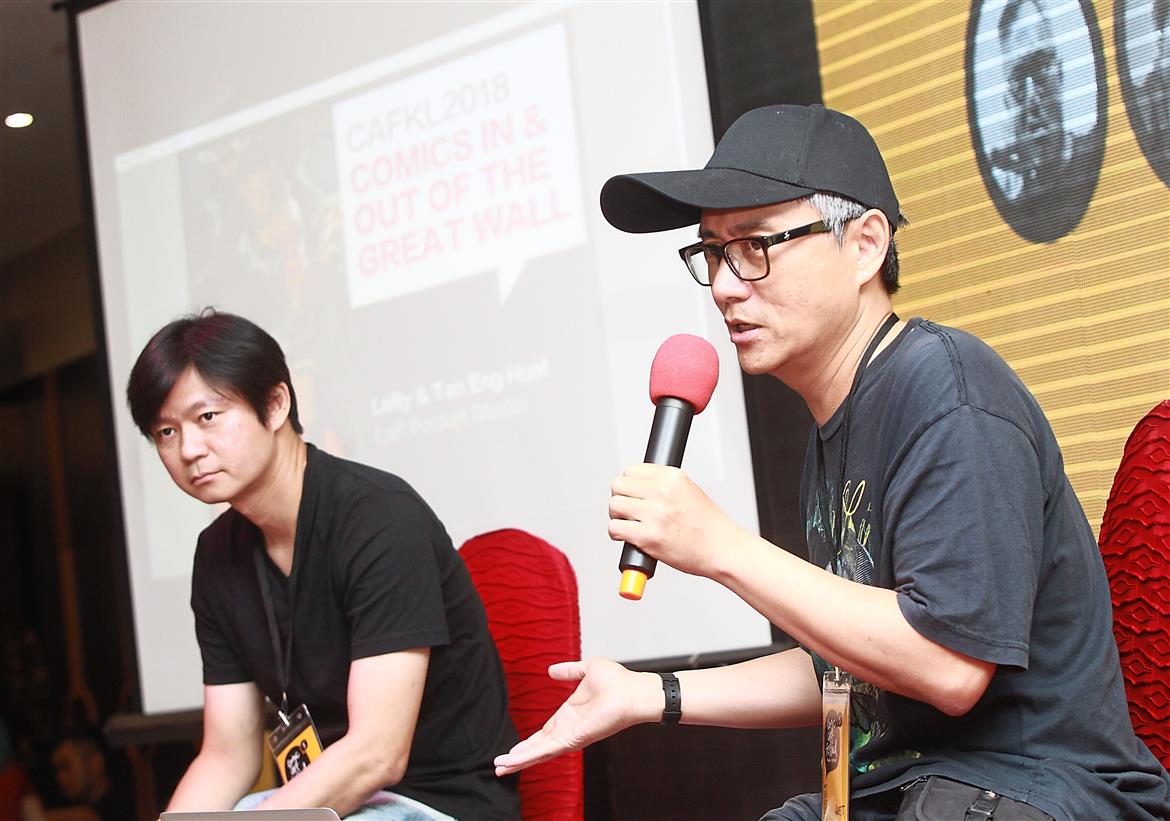 Lefty (right) and Tan during their panel at the Comic Art Festival recently.

“The company was initially an animation company, but they decided to develop comics, as it is the most reasonable way to develop IPs in a quick and economical way, and can be released a lot faster than animation.”

According to Lefty, the comics industry in China is much, MUCH bigger than you would think. “Readership-wise, it is HUGE. For instance, a popular title could have as many as three billion accumulated hits. Webcomics and online readership is the key element here,” he said.

“China is a very new market where the readers are young, their acceptance is high and the population is huge. No doubt, we need to abide by the government’s dos and don’ts, but the fact is readers in China really hunger for fresh subjects, and this excites me the most.”

Most mainstream Chinese readers’ behaviour mirror the Japanese, he said, but with a slightly narrower scope. “Romance, action adventure, fantasy, witchcraft, sci-fi, historical, wuxia and horror are genres that are well received there. 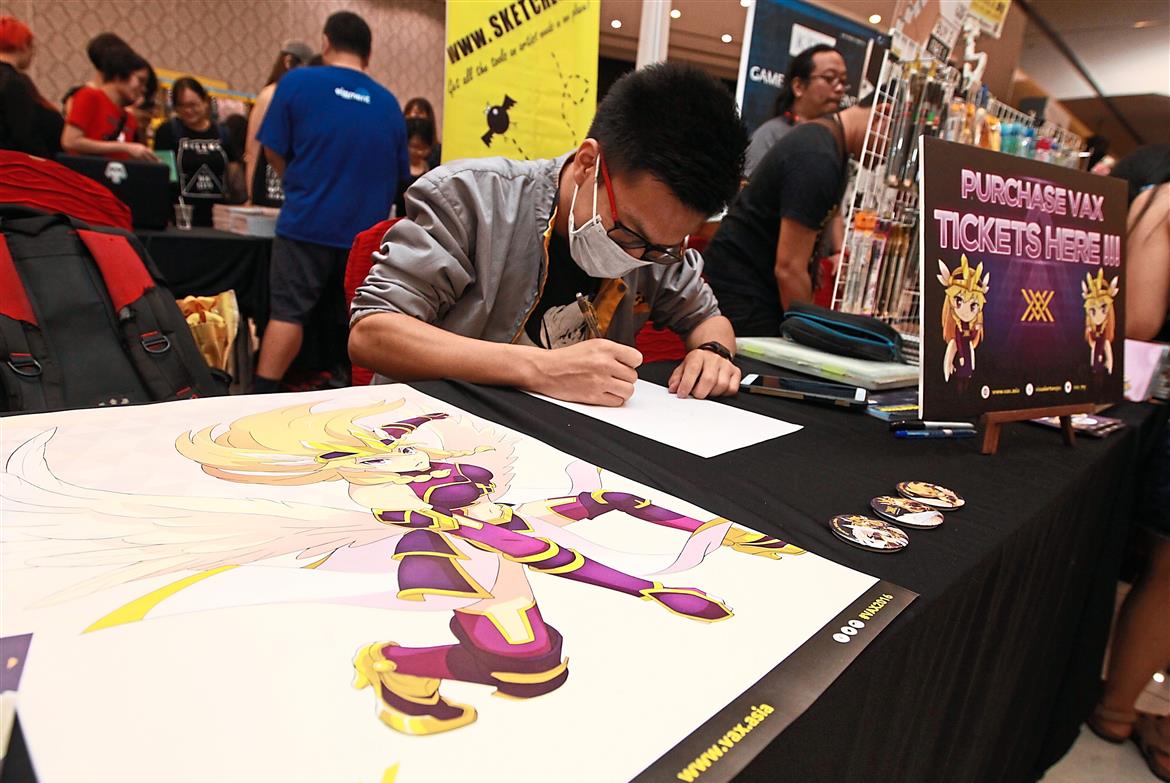 The recent Comic Art Festival was proof that there is no shortage of art talent in Malaysia. Photo: The Star/Norafifi Ehsan

“The good thing about the China market is it is big enough for experimental titles as well, just as long as you don’t touch sex, violence, religion and or political issues.”

So, what would his advice be to Malaysian creators hoping to expand or make it into China?

“First of all, you need to work with a company in China. Be clear of what you will and will not do before you talk them. Secondly, Most readers in China read their comics through their smartphones, so you will have to adjust your art to suit that format.”

Most importantly, he said, the success of your comics no longer depends on how many copies are sold.

“Only those who have a strong following will get their title printed as a physical book. So, know what you are good at, what your direction is, and work consistently hard on it. The rest is up to the readers.”