Pregnancy was no excuse for chemist Michelle Tan to slow down at work – she continued travelling, carrying boxes and climbing stairs as usual when she was carrying her first child.

Imagine her surprise when she was pregnant with her second child, her new employer asked her to resign from her job as a school lab assistant, for her “wellbeing”. When Tan refused, she was terminated.

This is one of the stories of gender discrimination shared in Women’s Aid Organisation’s (WAO) Invisible Women campaign. In conjunction with the International Women’s Day, some of these stories have been translated into art, now on show in the Invisible Women exhibition at the White Box in Publika, Kuala Lumpur, until March 18.

The works are mainly culled from an online survey conducted by WAO in 2016, which found that two out of five women were discriminated due to pregnancy, including being denied promotion, placed on prolonged probation, demoted and dismissed from their jobs.

Other works include Read Between The Lines, which explores work harassment through an installation of resumes. The Ones We Don’t See looks at the experience of working mothers.

WAO hopes the exhibition can spur more women who have experienced gender discrimination at work to speak up and share their stories.

“When women get discriminated at work, they have few or no options for redress at all. Many suffer in silence,” says WAO vice-president Meera Samanther, adding that the ultimate aim is to rally support for Gender Equality Act.

The Invisible Women is showing at the White Box, Publika, Solaris Dutamas, Kuala Lumpur till March 18. Open 10am-10pm. For more information or to share your story of gender discrimination, go to invisiblewomen.com.my. 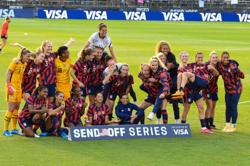