See what these artists have done with bamboo

Take a detour to Iskandar Puteri in Johor the next time you are in the neighbourhood; there are 15 huge bamboo installations that are currently taking shape under the skilful hands of artists and architects from Malaysia, Cambodia, Indonesia, Singapore, Thailand and the Philippines.

Scheduled to be completed on Nov 12, Konstruk is a bamboo installation art project located along the 2km promenade of Puteri Harbour.

Utilising bamboo sourced from Pontian in Johor, this project, which is a Khazanah Nasional initiative supported by UEM Sunrise Berhad, aims to promote the sustainability and versatility of bamboo as a building and design material, as well as showcase the creative talent from the region.

It is developed and managed by Lab DNA (Place Identity Sdn Bhd), and is part of the Iskandar Puteri Public Art Programme that commemorates the 10th anniversary of Iskandar Malaysia.

Konstruk is the first project of its kind in Malaysia. Whether by design or happenstance, diversity is the order of the day, with an alien spaceship, human hands, a bridge, a cocoon of sorts, and many other strange and beautiful shapes created out of bamboo on display in the area.

Some of the tools and materials used for building the bamboo installations for Konstruk.

“The artists involved in Konstruk are encouraged to explore the limits of bamboo. The installations are inspired by both natural and geometric forms. Some are expressive, while others are more contemplative. Konstruk emphasises on the ‘process’ and innovative structures,” says Nani Kahar of Lab DNA.

Almost 9,000 bamboo pieces of various lengths (up to 12m long) were used for this project.

One interesting bamboo structure by architecture design studio POW Ideas (comprising E Yon Kyle and Ong Jun Hao) is torus-shaped and surrounded by palm trees. Spanning 8m in diameter, it loops around on itself and gives the illusion of being suspended in mid-air.

This installation is inspired by the flexibility of bamboo and is aptly named Flow.

A night shot of Flow by POW Ideas at Konstruk. — POW Ideas

“When broken down to thin strips, the bamboo becomes malleable, enabling these strips to be bent and weaved into a fluid form. We were given an interesting location on Puteri Harbour with almost a grid of palm trees. It made sense for us to utilise these trees as a structure to our bamboo sculpture, creating the illusion that the entire piece is floating. Each line is a continuous loop, projecting a sense of dynamism in the otherwise static site,” says Ong, referring to Flow as “an amalgamation of computational form-making and analog craft”.

Architects by training, the duo approached the design from a structural point of view, looking into the detail of construction and coming up with a method of assembly that is systematic and precise.

Kuala Lumpur-based POW Ideas usually works with spaces and buildings and Konstruk marks its first foray into working with bamboo. “With Flow, it was very much about creating an experience and creating a momentous feeling,” adds Ong, 28.

As it turns out, working with an organic material such as bamboo was quite an eye-opener for the two guys, as it was deceptively lightweight but has a mind of its own.

“We quickly learned that bamboo will do what it wants and moves in ways it wants to. It was then our response to work with the material rather than fight it, by guiding the bamboo to how we wanted the outcome to be, but also letting the bamboo do its magic,” relates E, 30.

Cocoon by Malaysian Alvin Tan, which was created together with the community of Orang Seletar in Johor.

Not that it was clear sailing in the least, of course.

He shares that one of the biggest challenges they faced was suspending the entire structure at the height they wanted.

“We had to use a lift to raise the structure high enough. On the day we planned to do it, we had everyone in place and were ready to lift it, when there was a sudden downpour and we had to clear the site. It was however a good test to see if the structure could take a heavy downpour,” he says.

It would do well to do so, as the (treated) bamboo installations at Konstruk are designed to be a form of public art to last for several years.

E observes that despite bamboo growing in abundance in our country, it is hardly used on a large scale, unlike in places like Indonesia and Thailand where bamboo have been used to create buildings that are both durable and functional.

Indonesian bamboo artist Eko Prawoto, who lives in a village about 25km from Yogyakarta, is one of those who is very much at home with bamboo.

“It is an amazing natural material. We can use it for making baskets, musical instruments, fishing equipment, craft, furniture, bridges and even buildings. In the villages back home, we still have that ‘bamboo culture’ as a living tradition,” he says. Eko, 58, often uses bamboo in his art installations, but also for building components such as walls and ceilings, or building structures.

His Tunggak Semi (In Javanese, tunggak is post, and semi is blooming or growing leaves) at Konstruk is a set of six bamboo portals, each comprising three arches and two circles, that when combined look like a flower bud blooming, soaring and reaching for the sky.

Its base measures 6m in diameter, with a height of 10m.

For Tunggak Semi, Eko is assisted by five bamboo carpenters from Indonesia and a few other volunteers.

Inspired by the Iskandar Puteri name, Eko set out to create a bamboo installation that would capture the feminine spirit that he imagines is linked to this place.

“Strong, steady but also dynamic and beautiful. It is about strength, life-giving, a caring spirit. A growing flower reaches up to the sky, but it still has its roots firmly in the ground. I hope this could be the spirit of the new area as well, which is alive and growing and blooming,” he says.

At Konstruk, it is not just look and see. There are also installations like Jamboo by Kuala Lumpur-based Biji-Biji Initiative where you can make music and meet strangers.

Designed by William Koong, 30, Biji-Biji Initiative head of design and build, and digital artist Fenna, who is in her 20s, the creation of Jamboo is inspired by musical instruments such as the xylophone, angklung and drums.

There are surprises along the way as well, for instance: you play the bamboo pipe drums with your slippers!

“We thought that instead of designing just a structure, why not take it a step further and make it an interactive one?

“We wanted it to make a deeper impact on people by connecting them with each other through music. Come and jam with your friends, or join strangers in making music,” says Koong.

Measuring 15m across and 4m in height, Jamboo can house up to 10 people at a time. It is the first project by Biji-Biji Initiative (which usually works with a variety of waste material) where only bamboo is used.

Indonesian artist Andi Ramdani’s Katakan Cinta, with two hands meeting to form a heart shape, is something for the soul as well. It is set to be an Instagram-worthy favourite from this project.

“The symbol of love is universal, all religions teaches us about love. Love is not just a word or a language, it stems from the heart and is demonstrated through intentions expressed with words and actions,” says Andi, 37.

Our actions in life start as an intention (from the heart) and is then executed (by hand), he explains – hence the combination of hands and heart in Katakan Cinta, a 7m-tall structure.

“Plan for the future with love, nurture our children and grandchildren, because they will be the future occupants of our planet, and care for the Earth as the space on which all life thrives,” he advises.

Like Eko, Andi, who was born in Tasikmalaya, grew up playing with many traditional toys and games made from bamboo.

“Bamboo teaches us the philosophy of life; it is flexible and it is able to grow almost anywhere in the world,” he says.

But the Johor-sourced bamboo Andi had to work with for Konstruk was rather different than what he is used to back home.

“In Indonesia, I usually work with bamboo tali or bamboo apus, but my installation piece in Johor is made of bamboo ori, which breaks more easily.

“Another challenge that I faced while building Katakan Cinta, with my four assistant artist friends from Yogyakarta, is the extreme heat! But despite these all is forgotten once we see the fruits of our labour. To look upon the finished sculpture is very satisfying indeed,” he concludes.

Iskarnival Sama-Sama, which will be held at the same time as the Konstruk launch, is on at Puteri Harbour in Johor on Nov 12 and 13. The noon to 11pm programme includes art exhibitions, theatre, bazaars, concerts, workshops and more. Free admission. More info: www.iskarnival.asia.

See what these artists have done with bamboo 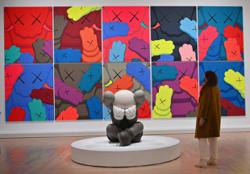