Sri Nagara Thendayuthapani Temple, Klang, Selangor: Built by the Nattukottai Chettiar merchants over 150 years ago, the Sri Nagara Thendayuthapani temple in Klang is dedicated to the goddess Parvathi. This is the oldest Hindu temple in Klang and it used to provide shelter and a place to network for early immigrants from India. Featuring ornate designs (inset), the temple houses the main deity Sree Raja Rajeswari, as well as Lord Ganesha and Lord Murugan. A Durgai Amman shrine is also set up within the temple complex, which serves as an important cultural and religious hub for the Hindu community. Photo: SHAARI CHEMAT/The Star

From Saracenic to Mughal, colonial to cultural, the architecture and design of the buildings are indeed inspiring. Each structure has contributed to society in one way or another, be it in religious, cultural, social or official capacities. More importantly, they have withstood the test of time and bore witness to the country’s history and progress. To celebrate Merdeka, we take a look at buildings all around Malaysia constructed before Independence to honour their historical and architectural heritage.

Masjid Syed Alwi, Kangar – Located in the heart of the state capital, the Alwi Mosque is a major landmark in Perlis and features classic Mughal architecture. Construction began in 1931 under British adviser M.C. Hay and was completed in 1933 under British adviser O. E. Venables. That same year, it was officially opened by the Raja of Perlis, Raja Syed Alwi Ibni Almarhum Tuan Syed Safi Jamalullail, after whom the mosque was named. The mosque was declared a National Heritage building in 1988.

Masjid Zahir, Alor Star – Located on the corner of Jalan Kampung Perak dan Jalan Pekan Melayu in Alor Setar, the Zahir State Mosque was built in 1912 at the request of the Regent of Kedah, Tunku Mahmud Ibni Almarhum Sultan Tajuddin Mukarram Shah. The late Sultan Muhammad Jiwa Zainal Abidin II, who was inspired by the Azizi Mosque of the Langkat Sultanate in North Sumatra, was said to be behind the design of the mosque. State records show that the mosque was built on the burial grounds of Kedah warriors who defended the land from Siam (now Thailand) in 1821.

Leong San Tong Khoo Kongsi, George Town – Situated in Cannon Square, George Town, the Leong San Tong Khoo Kongsi was completed in 1906 as the clan’s ancestral temple. The temple was constructed to replace an even more elaborate one built in 1903, which mysteriously burnt to the ground 29 days after completion. It is recorded that the Khoos thought the fire was a punishment from the gods for the building of such an ornate temple, so the current building is a scaled-down version. It is still, nevertheless, reputed to be the finest Chinese clan temple outside of China.

Masjid Abidin, Kuala Terengganu – The Abidin Mosque or Masjid Abidin is Terengganu’s old state royal mosque built on a 0.548ha piece of land by Sultan Zainal Abidin II between 1793 and 1808. Located in Kuala Terengganu, it is also known as the White Mosque or the Big Mosque. The original building was constructed out of wood, but circa 1852, the structure was replaced with one made out of bricks. In 1881, Sultan Ahmad II ibni Yang Dipertua Muda Tengku Mahmud constructed a new dome to replace the old one erected. In 1901, the mosque went through another renovation that involved space expansion and the addition of circular stone pillars and three minarets. The mosque went through another renovation in 1972, doubling the size of the original building and includes a tall minaret and new domes. Decorations such as calligraphic carvings of Quranic verses, prayers and arabesques were carved on the mosque’s entrance doors and grills.

Islamic Museum, Kota Baru – Built in 1902 using cengal wood and Singora roof tiles, the Kelantan Islamic Museum features Pattani-Kelantan Malay architecture. Different motifs and Quranic verses adorn the doors and windows and until 1917, the building was the home of the ninth Mentri Besar Hassan Mohd Salleh. In 1905, the building hosted the visit of Thai King Rama V to Kota Baru. It was later used as the office of the Islamic Religious and Malay Cultural and Ceremonial Department of Kelantan office until 1990. Officially opened in 1991, the Islamic Museum is a place where you can find artefacts, photographs and information related to the arrival of Islam in the Nusantara region as well as important personalities involved in the spread of Islam to Kelantan.

Sultan Abu Bakar Museum, Pekan – A heritage building constructed in 1929, the Sultan Abu Bakar Museum was originally a two-storey wooden building constructed in 1888 for the first British Resident of Pahang, J P Rodger. In 1929, the timber structure was replaced with a double-storey brick building. During World War II, the building became the headquarters for Japanese military officers. Later in 1948, it served as the official palace for the late Sultan Abu Bakar. It was formally opened by the Sultan of Pahang, Sultan Ahmad Shah on Oct 21, 1976, and the building was named after his father. The museum houses a large collection of ancient Chinese glasswares and ceramics previously used by former sultans of Pahang.

Larut, Matang and Selama Land and District Office, Taiping – Completed in 1897, the current Larut, Matang And Selama Land and District Office was first constructed to replace the old public office on Kota Road in Taiping, which was capital of Perak from 1876 to 1937. Designed in the shape of the alphabet ‘C’ after the last name of then state engineer Francis St G. Caulfeild, the Victorian Neo-Classical building was considered one of the most modern structures of its time. The building was later used as the Perak state secretariat office prior to becoming the land and district office. In 2012, the building was declared a National Heritage.

Sri Nagara Thendayuthapani Temple, Klang – Built by the Nattukottai Chettiar merchants over 150 years ago, the Sri Nagara Thendayuthapani temple in Klang is managed by the Nagarathar or Nattukottai Chettiar community. Dedicated to the Goddess Parvathi, the place of worship is the oldest Hindu temple in Klang that provided shelter and a place to network for early Indian immigrants. Featuring ornate detailed designs, the temple houses the main deity Sree Raja Rajeswari, as well as Lord Ganesha and Lord Murugan. A Durgai Amman shrine is also set up within the temple complex, which serves as an important cultural and religious hub for the Hindu community.

Kuala Lumpur and Selangor Chinese Assembly Hall, Kuala Lumpur – Completed in 1934, the idea for the KL Selangor Chinese Assembly Hall came from Chinese businessman and philanthropist Loke Yew, together with three other influential businessmen at that time, namely Yap Kwan Seng, Choo Kia Peng and Cheong Yoke Choy. The men wanted an organisation that united the various Chinese associations and were keen to set up a key operations centre and a place to hold cultural activities. The original architectural style of the building was Neo-classical, featuring high ceilings, huge Roman pillars and carvings with European influence. It is believed that the three front entrances represented man, earth, and the sky in Chinese culture. In July 2007, the building was gazetted as a National Heritage.

Masjid Jamek, Seremban – Believed to be the oldest mosque in Negri Sembilan and among the oldest in the country is Seremban’s Masjid Jamek, located along Jalan Tun Dr Ismail. Built in 1900, it portrays Saracenic architecture, featuring a minaret and a two-tier pyramidal roof instead of a dome. It has 30 pillars that uphold the structure and resembles the mosques built in neighbouring Malacca back then. A popular tourism destination, the mosque has been expanded in recent years to accommodate a larger congregation.

Independence Declaration Memorial, Malacca – Officially opened by Tunku Abdul Rahman Putra Al-Haj on Aug 31, 1985, the Independence Declaration Memorial was established to commemorate the service and sacrifice of those who fought for the country’s independence. Built in 1912, the two-storey building’s design is essentially colonial, featuring a porte cochère, but also incorporates Mogul domes. It was initially the Malacca Club (a British clubhouse back then) before adopting its current memorial-museum status and is located in front of Padang Banda Hilir in Malacca city, the venue where Tunku Abdul Rahman announced the successful conclusion of independence talks with the British in 1956.

Completed in 1942, the 5,575sqm (60,000sqft) building is designed by British architecture firm, Palmer and Turner. and estimated to cost RM2mil. Its design is characterised by colonial and Saracenic influence, with intricate carvings and designs under the eaves above the high-ceilinged main entrance. With a unique architectural design, it is a key landmark in the city. There is talk of turning it into museum space in the future.

St Michael’s Church, Sandakan – Sitting atop Elton Hill in Sandakan is St Michael and the Parish of All Angels’ church, also called St Michael’s Church in short. The construction of the oldest stone building in the state was initiated by Rev W H Elton in 1888 but was only completed in 1906. The designer, B W Mountfort, modeled it after the Christchurch Cathedral in New Zealand, first using ironwood, followed by brick and then stone, believed to be from the neighbouring Buli Sim Sim village. White stones used for the windows and doors are said to be imported from Hong Kong. Even though a strong earthquake shook Sandakan in 1897, there was no major damage to the stone walls. A group of Australians contributed the church’s beautiful stain glass windows to commemorate the 60th anniversary of the end of World War II. The building survived World War II in the 1940s and remains one of the very few stone buildings in Sabah.

General Post Office, Jalan Tun Abang Haji Openg, Kuching – Built in 1931 by Charles Vyner Brooke, Sarawak’s last Rajah, the Kuching General Post Office is a Neo-classical building that features Corinthian columns, arches and cornices. The Brooke family crest and motto Dum Spiro Spero (While I breathe I hope) is displayed on the pediment above the columns. Designed by Singapore firm Denis Santry of Swan and MacClaren Architects, the building was first used as a police station and the Rajah’s stables before becoming the general post office. There are now plans to turn the building into a museum or art gallery. 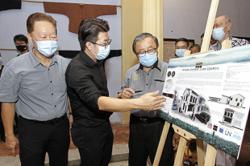 Promising future ahead for heritage building