Indonesian artist Dedy Sufriadi enjoys the ongoing exploration of text as the focal point of his art.

When is a hand not a hand?

“When viewed by an existentialist,” says Indonesian artist Dedy Sufriadi, explaining that existentialism rejects accepting an image at face value.

“Pictures tend to stiffle our perception of an image. If we see a picture of a hand, we only see it as a hand. Existentialists never interpret something just as is, because a hand could be more than an appendage,” he explains during a recent interview in Kuala Lumpur. He was in town to launch his first Malaysian exhibition Hypertext at Interpr8 Art Space in Publika, Kuala Lumpur.

Where art is concerned, Dedy has been filling his canvases with text when creating his images and art pieces.

“I find it difficult to speak through pictures. I rather use text. But I realise that if I just write as if writing in a book, it’s not very interesting. So I use paint, silkscreening and other techniques to bring the ideas to canvas,” shares Dedy, occasionally pausing as he switches between his native-Indonesian and English.

Dedy’s unique approach to art spans back to his college days where the art major also took to philosophy, with a particular interest in existentialism and the works of German philosopher Friedrich Wilhelm Nietzsche.

Born in Palembang, Dedy moved to Yogyakarta to obtain his Bachelor of Fine Arts from the famed Insitut Seni Indonesia (ISI) in the mid-1990s. More than a decade later, the 38-year-old went back to his alma mater to complete his Masters of Fine Arts.

In between both stints in university, Dedy developed his artistic identity by taking part in numerous art exhibitions through the Indonesian art circuit, especially in major cities like Jakarta, Yogyakarta, Bandung, Bali, Malang, Magelang, Padang and his hometown Palembang.

Dedy’s works have also been featured internationally, with exhibits in New York, Brisbane, Seoul and now in Kuala Lumpur.

60 to 70 pieces a year, with 2013 being a particularly productive year, during which Dedy created 110 pieces.

Dedy says he usually takes between seven to 10 days to compete a 2m X 4m piece. He tries to complete three to five pieces a month. 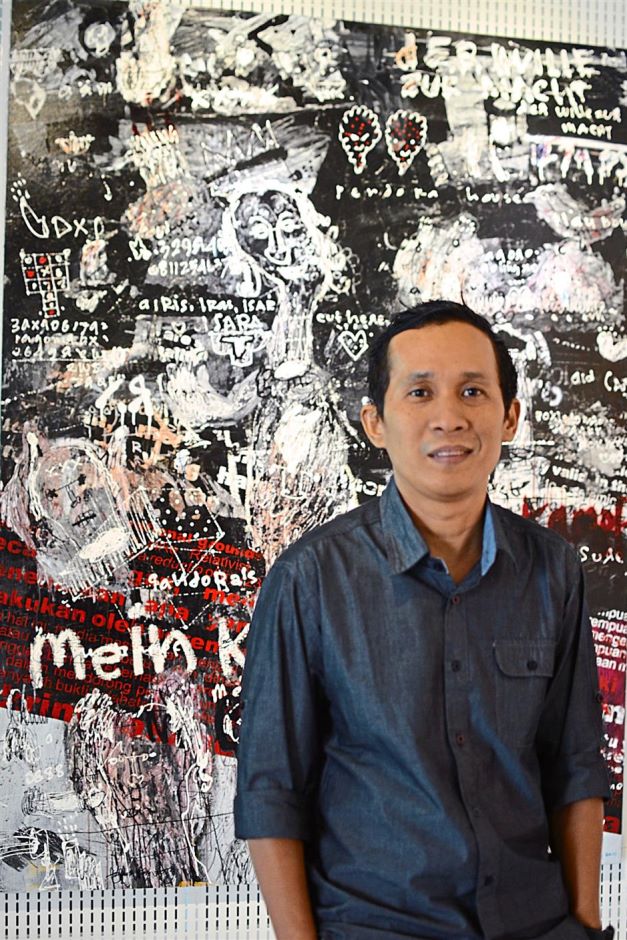 “To draw impulsively, I need to use larger canvases. With a smaller one I would fill it in one swipe!” he says with a laugh, adding that his largest piece was a whopping 10 meters wide.

The affable chap agrees that not every piece is a gem, so he displays what works and stores what doesn’t in his studio.

“I rarely recycle my canvases. Back in university, I recycled some 70% of my pieces and I have always regretted it. I was still learning then. I regret not having those (early) works for documentation,” says Dedi.

The soft-spoken Indonesian admits that he hadn’t planned on embarking on an art career so soon. But he was too cash-strapped to do his masters then. After a successful decade of work, Dedy felt he finally had the time and money to go back to school. 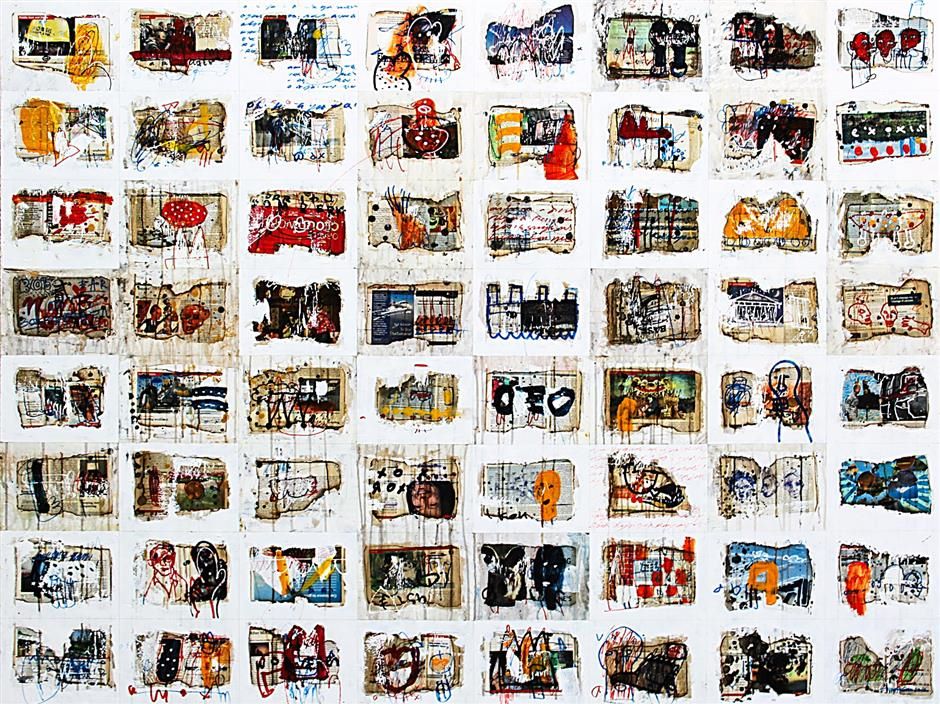 [To create Burning Series, Art Pleasure (acrylic on canvas, 2014), Dedy Sufriadi torched segments of newspapers and magazines before using them as a collage then painting over them.

“Doing my masters has been incredibly useful as it gives me new insight into art. The classes went more into art theory and philosophy and how to critique art,” reveals Dedy, who summed up his masters as studying the “why” of art, while his degree went into the “how” of it.

Despite the mental awakening, Dedy believes his masters has not changed the visual aspect of his art – which usually consists of lines of text, hand drawn and silk screened onto huge canvases with bizarre-images and ink slashes scattered around the words. 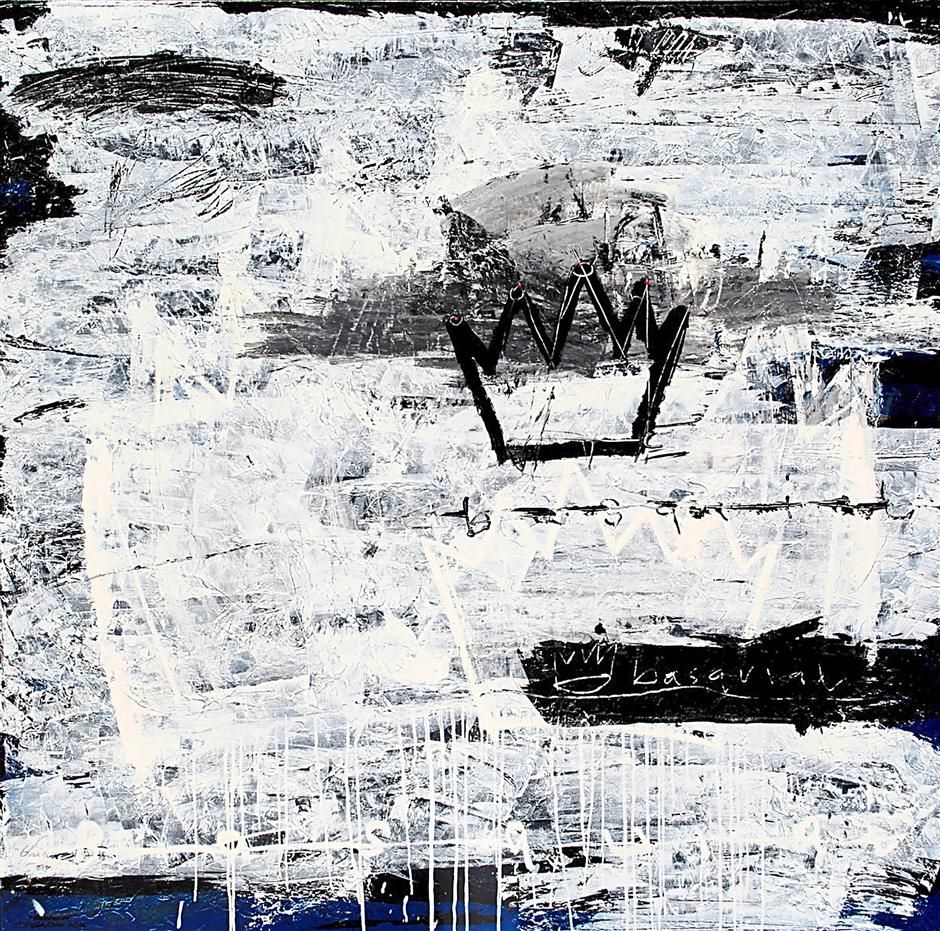 “It’s affected the themes and ideas that go into my art. Now I do more reading and research to flesh out a story for my art before drawing it out,” he says, pointing to a few works from Hypertext at this Interpr8 Art Space gallery.

His Hypertext series, which is the result of Dedy’s thesis, is also about “wall power” as the works are sizeable.

The size of his works sometimes does make it hard to tour. Dedy reveals that a few of his art pieces were too heavy to be transported. Catatan Pinggir, a 2mx4m canvas studded with Dedy’s sketch pads, clocked in at a weighty 80kg. Those going to the Interpr8 gallery will be able to catch the equally impressive sister-piece Burning Series which uses a collage of scorched snippets of magazines, newspaper and books, which were set on fire before being glued on, to make each snippet uniquely random.

“As paper doesn’t burn evenly, it becomes a random element like how the chosen articles are not obviously linked,” explains Dedy.

Hypertext, featuring 25 pieces, is made up of works created since 2013 .

The artist’s exhibition here is presented here by Artemis Art and Interpr8 Art Space. Artemis has collaborated with the artist before, but Hypertext marks Dedy’s first solo showing in the country and his 10th career solo exhibition.

Dedy reveals that the idea behind Hypertext was drawn from what he found on the Internet, books and magazines. The exhibition’s title refers to the computing concept of linking one set of words to another, like how online encyclopaedia Wikipedia is made up of a web of hypertext.

“My inspiration comes mostly from philosophy and books about philosophy. In this more recent series, the words of the Dalai Lama have played a part in the artistic process,” says Dedy, adding he enjoyed the Dalai Lama’s compact phrasing.

Dedy admits combining text and images is not something new in the art world and that even he has been doing this since the 1990s. However, he believes his philosophical approach and the changes in usage of text on the Internet brings a new dimension to Hypertext.

“In Clip Art, the central piece in Hypertext, the idea came from motion graphics and GIFs (called clip art in Indonesian) that combine text and images, and is now a fixture of the Internet,” says Dedy. Dedy notes that an artist can’t be a one trick pony, though. After thoroughly exploring existentialism, Dedy says he is considering branching out to more spiritual elements and also exploring more collage work with plastic and unusual materials.

Dedy sums up that art is constant progression and it will always be an exciting journey as he writes out his career script in text art.

Dedy Sufriadi’s Hypertext solo exhibition is on till Aug 31 at Interpr8 Art Space, Lot 20, Level G4, Block C5, Publika, Kuala Lumpur. This exhibition is a collaboration between Artemis Art and Interpr8 Art Space. Open daily (except Mondays) from 11am to 7pm. Browse: www.artemisartgallery.com, www.interpr8artspace.com. Call 019-664-7088 or 012 395-2081.