Singapore Biennale 2013 immerses itself in art from the region’s unique, diverse cultures and communities.

WHAT do a garden of disembodied dolls’ heads, mountain-like bamboo structures, a public ritualistic mandi bunga (flower bath) or a giant mound of vivid red saga seeds have to say about the complex, diverse and dynamic region that is South-East Asia? The answer, perhaps, depends on what you’re looking for. This year’s Singapore Biennale 2013 (SB2013), where the abovementioned works are currently on display, is very much about the nature of contemporary art itself: what it is, what it isn’t, and how the line between these definitions can often blur.

Organised by the Singapore Art Museum (SAM) with the theme If The World Changed, the fourth edition of the island state’s biennial contemporary art event features works by 82 artists and art collectives from 13 different countries. Interestingly, unlike the past Biennales, SB2013 aims to look at the growing body of work in the South-East Asian region, foregrounding issues, practices and viewpoints that are, more often than not, unique to this part of the world.

To achieve this, an unusual approach was taken when it came to SB2013’s curatorship: a team of 27 curators from the region were brought together for a collaborative effort that allowed a more introspective look at each country’s visual arts scene. The result? The strongest Asian representation to date, with 93% of the works on display coming from South-East Asia.

The Malaysian art scene was further represented at SB2013 by an impressive nine artists, the most to have ever shown at the event. They are: Adrian Ho, Chi Too, Chris Chong Chan Fui, Jainal Amambing, Poodien, Sharon Chin, Shieko Reto, Tan Wei Kheng and Zulkifli Yusoff. The panel of curators also included Malaysians Faizal Sidik and Yee I-Lann.

SAM director Dr Susie Lingham admitted during the media launch last week that it was an ambitious undertaking, but one that was necessary for the type of exhibition they hoped to put together.

“People kept asking us, why such a complex project? And yes, it was quite a challenge working with so many curators, but it was also absolutely necessary. South-East Asia is complex by nature, and nature of this collaboration helps reflect the complexity of the region,” she explained. 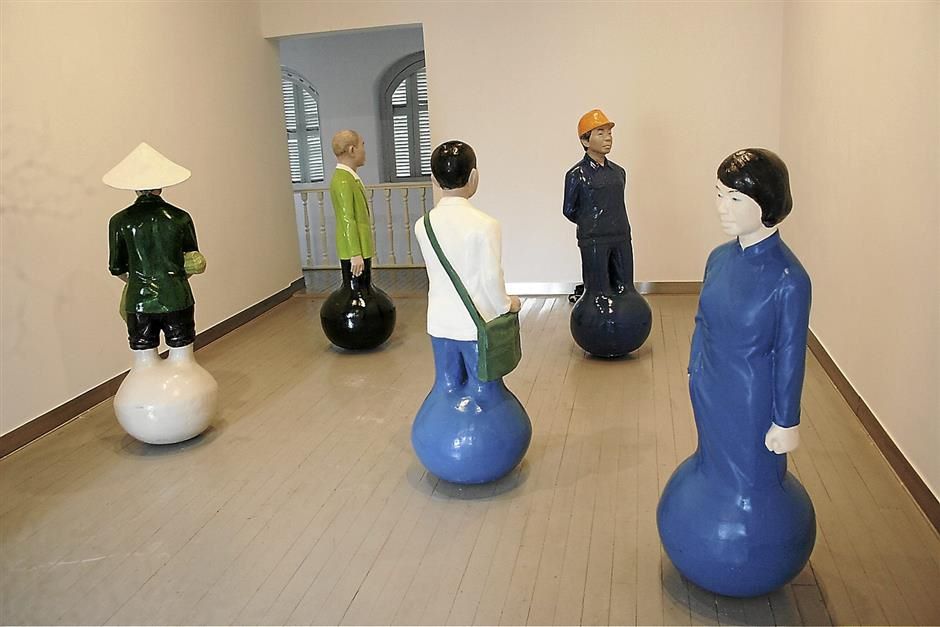 We Never Fell by Nguyen Tran Nam of Vietnam is an installation seeking to balance social and political realities.

SB2013 project director Tan Boon Hui shared that part of this year’s aim was to extend the capacity of the Biennale to engage with the art of the region.

“If we ourselves don’t say we believe in our own art, how can we expect others to?” Tan said. “Hence, we looked for curators from the region who have very deep knowledge of specific arts scenes that we at SAM don’t.”

Works from Malaysia, Singapore, Cambodia, Myanmar, Laos, Indonesia, Thailand, Vietnam and the Philippines, as well as several other international artists, spoke of a wide variety of local and global concerns, from environmental degradation and our place in the universe to personal histories and sexuality.

Filipino artist Oscar Villamiel’s Payatas, for instance, an installation of thousands of dolls excavated from a landfill, is a haunting testament to the thousands of inhabitants, including children, who scavenge for usable items.

Equally thought-provoking is a video installation by Vietnamese artist Nguyen Trinh Thi, where images of artists eating is projected onto life-size cut-outs, a subtle and powerful commentary on artistic freedom and surveillance.

Anahata by Malaysia-born Kumari Nahappan, who works in Singapore, meanwhile, is a seemingly-simple yet emotional work where 4,000kgs of saga seeds collected from across South-East Asia is heaped in a pile – an expression of change and a rumination on the power of possibilities. 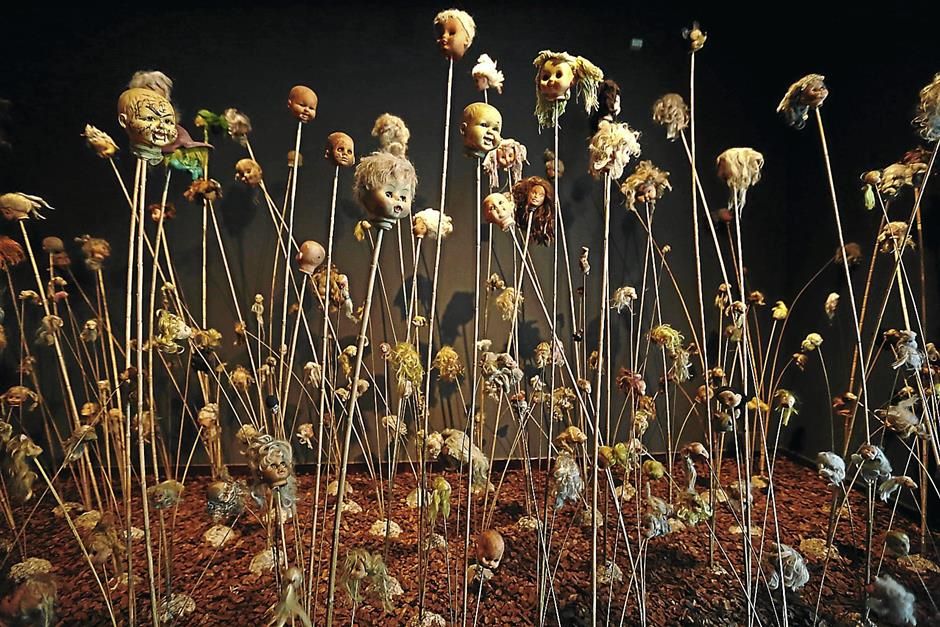 Filipino artist Oscar Villamiel’s Payatas, which consists of thousands of dolls excavated from a Manila landfill.

Nasirun of Indonesia’s Between Worlds, on the other hand, links tradition with modernity by creating an installation of wayang kulit puppets inside glass bottles and beakers, mimicking the effect of television.

Malaysia’s Sharon Chin, too, framed the centuries-old Malay tradition of mandi bunga, where one bathes in water infused with flowers to ward off negative influences, within a modern context with her performance art work Mandi Bunga (Flower Bath). About 100 people were engaged to design yellow costumes with flowers, and take part in a mass flower bath during the opening weekend of the Biennale last weekend.

The sheer diversity of the works also gives rise to interesting discussions and observations on what constitutes contemporary art in the first place, and whether certain tribal or traditional art forms, so commonly seen in South-East Asia, can successfully cross over into contemporary works of merit.

With so many curator styles and visions, not to mention types of artists, the SB2013 does occasionally feel rather scattered, with some works struggling to achieve the quality and depth that one would expect in an event like this. The strong regional focus, however, means the works feel not only current, but somehow personal, to both artist and viewer.

“In trying to curate so many works, we realised that there is no one theme,” said Susie. “Even though If The World Changed is the hanger all these works hang on, they are all so different and diverse, and that really says something about the work being produced in this region.”

The Singapore Biennale 2013 is being held until Feb 16, 2014, in a number of arts spaces in the Bras Basah, Bugis precinct, including the Singapore Art Museum and National Museum Of Singapore. Tickets, priced at S$10 (RM25.40) for adults and S$5 (RM12.70) for students and senior citizens, are available at the exhibition venues and online at SISTIC (www.sistic.com.sg). For more info, visit  www.singaporebiennale.org.