First, a disclaimer before I begin my review of these poems. I have known Prof Malachi Edwin Vethamani (“Edwin” to me) for many years, as an academic, a bibliographer, and anthologist of Malaysian literature in English, and, more recently, as a professor at the University of Nottingham Malaysia Campus, where I do some part-time teaching.

But these are not the reasons that I am writing this review of Life Happens, his second collection of poetry (his first collection, Complicated Lives, was published last year).

This review is the result of my experience at the recent launch of this book. While half-reading and half-listening to the poems being read out, I felt that prickling in the back of my neck that made me sit up and ask, “What’s just happened here?” Intrigued, I began to study the poems in Life Happens, trying to answer my own question. This review is a summary of my initial discoveries.

Next, a confession. I am not a fan of contemporary poetry. In my own form of bigotry, much of the poetry being written today strikes me as little more than chopped-up prose.

Which brings me to Edwin’s poems. There is no denying that at first glance, they resemble chopped-up prose. The sentence structures are simple; the words are everyday words; and there are no intricate metaphors or imagery to be unravelled before understanding dawns. The voice and tone are those of a person thinking or talking to himself about what seems like the most mundane of things. 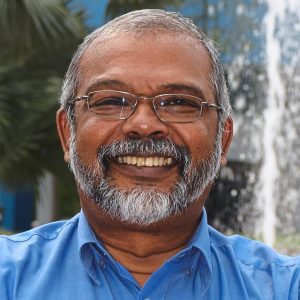 What, you may ask, is so poetic about that? Not much, I might say –But ah, have you noticed that the different mispronunciations of the poet’s first name, Malachi, can be interpreted as offensive words in some local languages and slang? And did you notice the sly dig (or poet’s revenge) made in the allusion to the Greek alphabet in the line “Chi as in chi-square”?

There is more. There is a pause (or full stop) after “Chi as in chi-square”, followed by the two closing verses:

“You say what you hear /not what I say.

“I hear what you say /not what I want to hear.”

That is what I call the “poetic moment”; that moment when the reader may feel a prickling in the back of the neck, put the book down, and stop to think. For in those two sentences lies the complete history of human communication or non-communication – and how “life happens”. 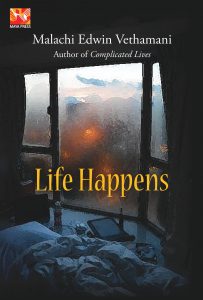 I highlight this poem because it is short and it illustrates the three “movements” that form the structure of most of Edwin’s poems. It begins with something personal, almost mundane, that is then placed in a local social context. The local social context evokes in the reader some recognition of parallel or identical experiences. And from this recognition of mutuality, the poet’s thoughts guide us upward to the vantage point of a universal truth, allowing us to look at humanity and the world with fresh eyes.

If I had to characterise the flavour of Edwin’s poetry in no more than three words, I would choose “honesty”, “humour”, and “humanity”.

The poems about family and family life are particularly honest; the ones about love almost painfully so. Each one tells a story that is complete-in-itself on the page – of heartbreak, loss, loneliness, and longing. And yet each is an incomplete, ongoing story because it sets off tremors reaching backward to a hinted-at past and forward to an imagined future – all tinged with humour, irony, remembered joys, and quiet resignation.

Two aspects of Edwin’s poetic world are worth noting. One is that it is the very real world of today. In many of the individual poems, information technology – the computer, the mobile phone, Candy Crush, and Facebook – plays a role in defining human experiences and even dictating life-changing decisions.

The other is that it is a world where conventional categories of things, people, and experiences are broken down and re-categorised according to what appears to be the poet’s scale of emotional significance. The poems are divided into six sections: “Family”, “Friends And Acquaintances”, “Companions”, “Lovers And Other Strangers”, “The Departed”, and “The Living”. But to take just one example: you will find the poem, “Grandfather”, in “Friends And Acquaintances”, together with poems about trees and flowers and birds.

There is a lot more to be said about the poems. But because no two people ever read the same poem in the same way, I would urge you to read these poems and make your own discoveries. And because we often find new things in poems when we re-read them, the tonal and emotional density of the poems make Life Happens a collection you want to keep.

Chuah Guat Eng is a published author who teaches fiction writing at two universities in Malaysia.