The Triumph Inspiration Award challenged students to come up with creative designs for intimate apparel.

FROM lacy sensuality to futuristic designs, each lingerie design held its own thanks to the individual style and concept. In the end, it was the simple “emotion of a girl” that bagged the grand prize. Actress Michelle Lee (centre) was one of the guests of honour at the Triumph InspirationAward 2008 held in Beijing on July 31. – Photos by NG KOK LEONG/The Star

Held at the avant-garde Art Zone in Dashanzi, which is also House of Switzerland during the Olympics, the award challenged the students to create a conceptual showpiece set, comprising an under-wired bra and brief, to the theme of “Female Fascination”.

The young designers were inspired by various people, from GI Jane to Marie Antoinette, and intangible themes like love and velocity.

However, judges chose Japanese Midori Matsuo’s eye-catching and bold design Under Skin, which featured eye lids for the bra and a striking red, “sad” pair of lips for the brief, as the winning piece.

“When women feel like crying, they tend to hide it. What this kind of delicate feeling and lingerie have in common is that both are only revealed to the ‘important person’ in a woman’s life. “I designed my lingerie to look like the face of a crying woman to illustrate this similar trait.”

Germany took home the second prize, which went to Theresa Bachler, 21, who named her piece Once Upon a Time.

“For my showpiece I was inspired by the glamour of the 30s. I used a lot of high-quality fabric such as silk and lace. My main inspiration came from the ‘little black dress’ which Vogue magazine in 1935 described as ‘nothing in fashion is as new’. 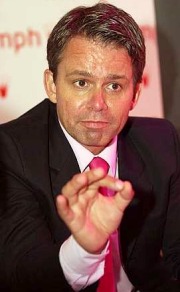 Jan Rosenberg: ‘Beautifullingerie must bring thebest out of the womanwho wears it.’

“My design was based on making a little black dress out of lingerie,” said Bachler, who spent about €100 (RM500) on her ensemble.

Norwegian Stine Fagervik-Rosen, 28, walked away with the third prize with her colourful and eclectic creation Desire for Beautiful Trash.

“My main inspiration came from the desire to make something beautiful out of trash, from the atmosphere and fascination I experience when I am at the market or in a second-hand shop.

“I love the way the elements – clothes, furniture, art and jewellery with their lively colours – are mixed and keep the balance of chaos, and the way every element tells me its hidden story.”

Fagervik-Rosen used a mix of materials, vintage and second-hand, to put together her winning piece.

Olympic gold medalist and former world champion (100m) Linford Christie, and actress Michelle Lee were among those who gave out the awards to the winners.

Matsuo will also be involved in the adaptation of her showpiece into a commercial garment, which will be produced in limited edition and sold worldwide in Triumph stores.

The other countries who made it to the top 10 were Australia, China, Denmark, Hungary, Italy, Portugal and Switzerland.

At the press interview, Rosenberg was asked whether Matsuo’s design would be difficult for the company to commercialise.

“A little. The more extreme the design, the less practical it is. We have to see (if it will sell well),” he said.

Does he value inspiration or commercial value more? 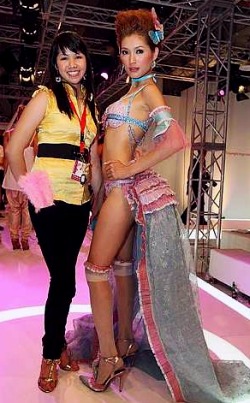 Finalist from Malaysia Merlin Yuwita (left) with model Amber Chia at the awards.

“I think we cannot have one without the other. We are here to see inspiration but if we only go for inspiration, we cannot afford it. We have to go commercial to finance the inspiration.”

Rosenberg said there were a few distinctive qualities that marked good lingerie.

“Beautiful lingerie must bring the best out of the woman who wears it and that depends on the style of the woman, whether it is classic or trendy. Good lingerie also needs to fit well,” he explained.

He added that China’s piece, a graceful and soft design inspired by feathers, was perfectly crafted. “As a company, we may consider commercialising it later.”

Although Malaysia did not make it to the Top 10, Rosenberg said he actually liked Merlin Yuwita’s design A Gift For Marie, inspired by French queen and historical fashion icon Marie Antoinette.

“It has a lot of glamour and picked up the trend of Marie Antoinette very well. The craftsmanship was beautiful and the lingerie fitted the model perfectly,” said Rosenberg.

Yuwita, 20, maintained her cheerful disposition after the award and said she cherished the exposure she received from participating in the TIA.

“I cannot believe that I am here at this international award ceremony, and that I’m meeting so many other designers and sharing experiences. I am very happy and grateful for this opportunity,” said Yuwita from Lim Kok Wing University of Creative Technology.

For a full overview of the award and finalists, go to triumph-inspiration-award.com