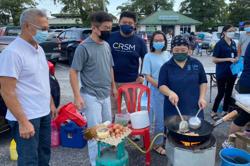 Tai Kong is in the heart of Chow Kit’s commercial area on the corner of Jalan Putra and Jalan Raja Laut.

IN the commercial heart of Kuala Lumpur’s Chow Kit district, Tai Kong coffeeshop stands out prominently at the corner of Jalan Putra and the main traffic artery of Jalan Raja Laut.

From the outside, it seems as if the outlet is split into two because there is a hotel entrance that separates the front segments but once inside, it’s clear that both areas are connected.

The stalls are all at the front of the kopitiam and because the eatery is so large, we needed to do a small tour around the outside before we could decide what to order.

Inside, the coffeeshop which still retains its retro geometric floor tiles is well-ventilated and it’s cool enough to enjoy a bowl of noodles in hot soup.

In the middle of the shop is a giant glass case that showcases an assortment of beer bottles, while on the coffeeshop’s white-tiled walls are beer posters.

Because of its proximity to a working-class neighbourhood, a mall and hotels, the coffeeshop gets an interesting mix of customers. The char kuey teow (top right) has enough ‘wok hei’ and doesn’t skimp on the cockles, fish cake and prawns.

On the Sunday morning when we visited, there were women who came with their groceries as well as families with young children while the older folk could be seen enjoying the kopitiam staple of half-boiled eggs and toast.

There were also foreign workers and tourists dining there that morning.

The coffeeshop is operated by a Hockchu family hailing from Alor Setar, Kedah.

In the evenings, a tai chow operator takes over.

During the day, a few senior citizens efficiently operate the drink station, take orders and serve. On weekdays, the shop is packed with office workers who come for lunch.

They can be seen buzzing back and forth around the cashier’s till that is manned by a very friendly young man.

I found out later that one of the seniors was his aunt while another was his father.

Samuel Ng, 29, said his grandmother started the coffeeshop in 1972 along with the hotel upstairs.

Ownership was later passed to his father Ng Kee Cheong and his uncle Ng Kee Tiong, who are the current coffeeshop operators.

The eldest of three children, Samuel said he had been working full-time at the coffeeshop for the past six years, in addition to running another business selling phones and watches.

“It’s important for me to be here at the coffeeshop because this is my family business,” he said. When asked if he could handle the drink station, he assured me that he was capable.

“Our coffee is made to order, unlike other places where the drinks are pre-made,” he explained.

He said the coffeeshop mostly catered to the office crowd during the week and was busiest then, but there was also a sizeable crowd on Sundays.

According to Samuel, a few stall operators gave up the business during the movement control order period.

However, he said the pork noodle and yong tau foo stalls had been there for the past 30 years, and the chap fan (economy rice) operator, some 10 years.

We decided to order pork noodles and char kuey teow for starters. The yong tau foo stall has been operating for the past 30 years.

The noodles were in a tasty soup topped with fried garlic and springy pork balls.

I enjoyed the char kuey teow which had enough wok hei (flavour imparted by a hot wok) and did not skimp on the cockles, fish cake and prawns.

The yong tau foo did not disappoint either but being more carnivorous, I sought nourishment from the roast meat stall.

It’s a relative newcomer, having opened six months ago.

Its char siew (barbecued roast pork) was tender and not too sweet, but what we really enjoyed was the siew yoke (roast pork belly) – the crackling had a thunderous crunch in my mouth and was followed by sweet, melt-in-the-mouth belly fat interspersed between roast meat layers.

I’m likely to return for that and the next time, I’ll know to order herbal teas like chrysanthemum that are made by Samuel’s cheerful 71-year-old aunt.