More Malaysians are barbecuing at home than ever. Here's the expert advice on how to get started. 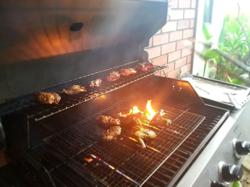 During the pandemic and ensuing lockdowns, more Malaysian families discovered barbeque as an activity they can do together. — 123rf.com

Over two million years ago, early humans were already fashioning makeshift barbecues, mostly in the form of chunks of meat placed over open fires, according to anthropologist Richard Wrangham in his book, Catching Fire: How Cooking Made Us Human.

These rudimentary fires were the earliest precursors to the modern barbecue. Of course, over the course of millions of years, things have changed fairly dramatically.

For one, although the history on this is murky, it is generally purported that the word ‘barbecue’ has its roots in the word ‘barbacoa’, used by Spanish conquistadors who discovered a Caribbean tribe cooking meat over wooden platforms.

The first written mention of ‘barbacoa’ was discovered in a Spanish explorer's account of the West Indies in 1526, according to an article on livescience.com. Incidentally, the Spanish were said to have brought these techniques with them when they travelled with Christopher Columbus. 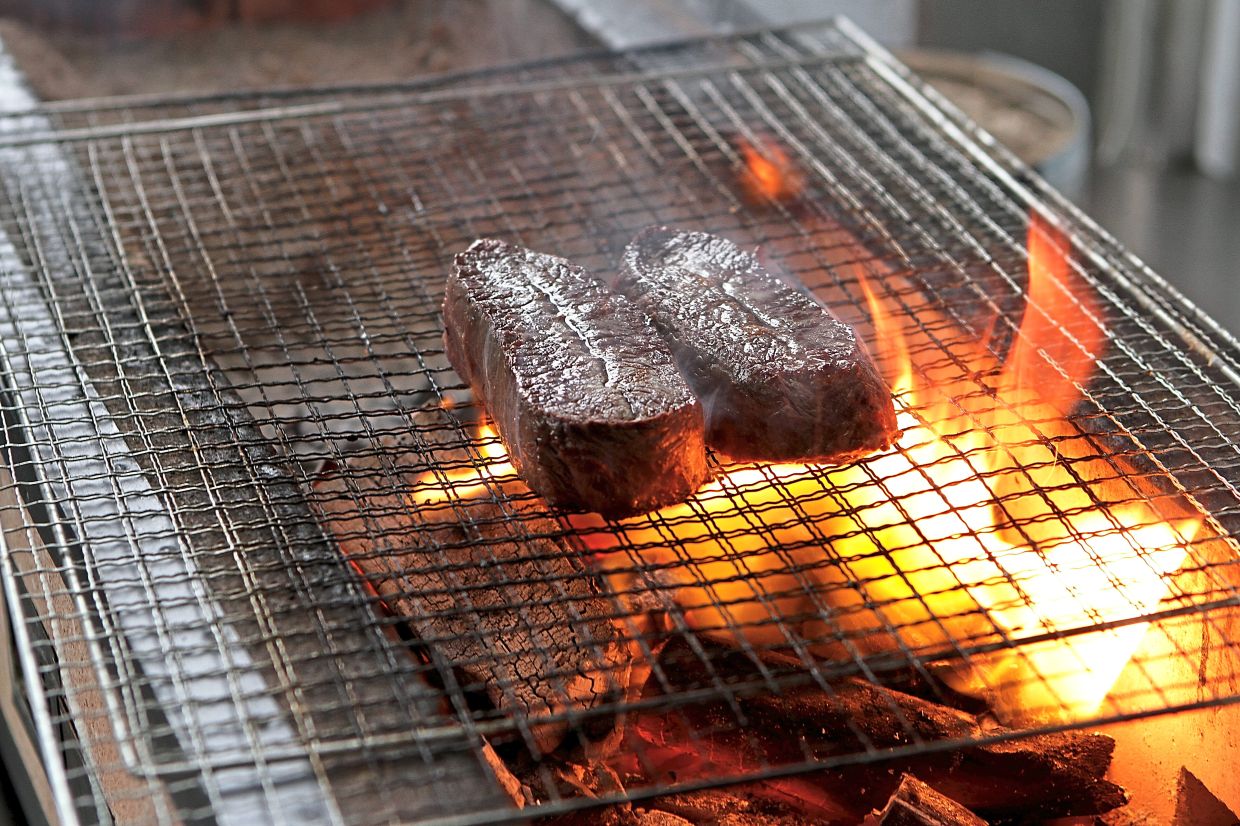 Cooking meat over a fire in the outdoors is essentially what a barbecue is all about. — Filepic

Barbecue is also an integral part of other cultures. The famed Korean barbecue for instance, traces its roots back over 2,000 years ago and is said to have originated from the nomadic Maek people. South African braai meanwhile is derived from the Dutch word for ‘roast’ and has become more than a barbecue; often it involves a celebratory atmosphere that can last for hours, also because the meat is cooked slowly using local wood.

Then there are south American staples like Chilean asado, which is essentially meat placed on a long metal stick called asadon – this is a summer must-have in the country.

In Malaysia, barbecues are a facet of life for communities like the Dayaks in Borneo, who often barbecue meat like wild boar, which they hunt themselves. Grilled food like satay and ikan bakar meanwhile meld traditional barbecue precepts with inimitably Malaysian flavours.

Interestingly, even the core ingredients in a barbecue have shifted over time. While the emphasis in the past always used to be about barbecuing huge slabs of meat or seafood, in the past few years, plant-based options have become hugely popular in the barbecue space, with “cauliflower steaks” rising to the top of the plant-based barbecue charts. 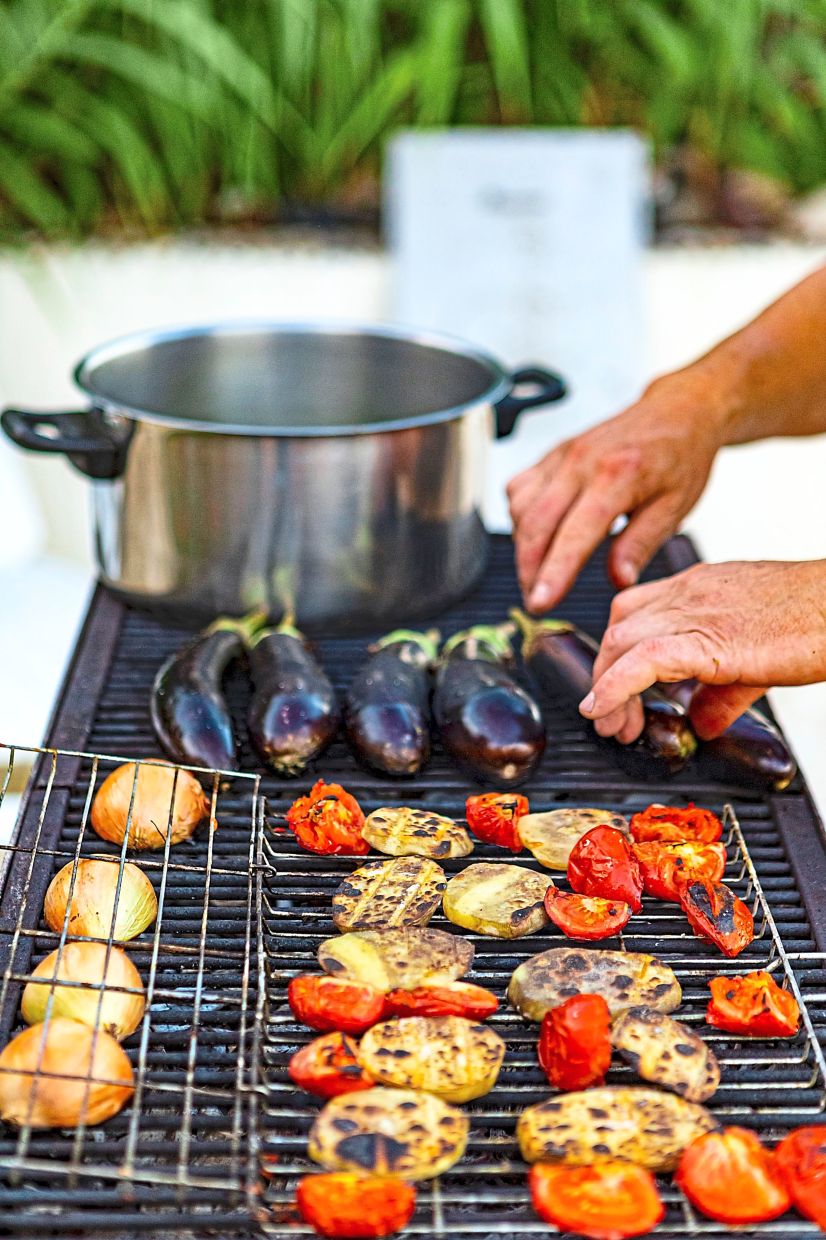 Although meat has traditionally always been the ingredient of choice for barbecues, there is now a growing shift towards barbecuing vegetables as well. — HULKI OKAN TABAK/Unsplash

The Covid-19 pandemic and ensuing lockdowns have also meant more people than ever have been confined to their homes, which in turn has spurred an increased interest in home barbecuing. In north America, this has translated to a 400% increase in grill/smoker sales, according to Michael Haas, who runs the popular barbecue website angrybbq.com.

In Malaysia, home barbecuing is also on the rise, spurred in large part by the various iterations of the lockdown which forced families to think of different ways to occupy their time together.

According to Yap Wei Leng, the retail manager of BBQ King Malaysia, a specialist barbecue retail shop which has four outlets in the Klang Valley, sales of barbecue sets have gone up by 40% during the pandemic.

“When the pandemic started, people realised they had no activities to do, so they bought barbecue sets to entertain their families at home. So over this past year, we have been getting a lot of young families buying barbecue sets,” she says.

But in order for all these new Malaysian barbecue enthusiasts to fully embrace home barbecuing, they first have to understand the basics.

There is both a science and an art to barbecuing and a successful barbecue is often dependent on both. This is something avid barbecue fan Haas discovered over the course of two decades of trial and error. 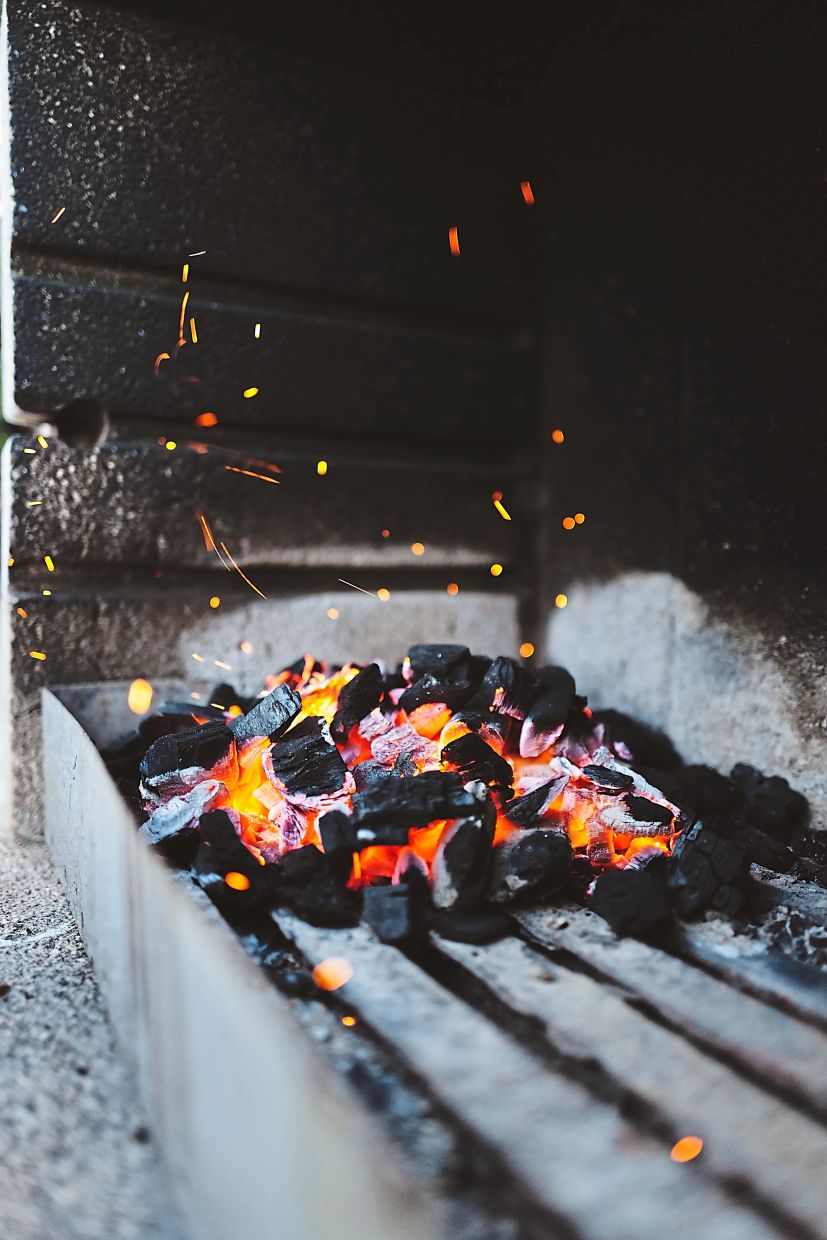 A charcoal-fuelled barbecue gives off a nice charred quality to the food, but takes longer to cook than gas grills. — JONAS ALLERT/Unsplash

Having picked up many tips and tricks along the way, Haas decided to start angrybbq.com, a website devoted to teaching home barbecuing enthusiasts how to go about barbecuing in their own home smokers/grillers.

So just what is barbecuing anyway? And how is it different from grilling?

“Many people may use barbecuing and grilling interchangeably. There is a difference between the cooking methods. Barbecuing involves cooking foods low and slow over indirect heat for long periods of time in a closed cooking chamber. The lid closed allows the heat to circulate cooking the food.

“Grilling includes cooking foods over the heat source, like fire or charcoal. Think of grilling as a hot and fast way to cook. If you are going to cook a beef steak, you want a searing high temperature grill. If you are cooking a beef brisket or roast, you want a low temperature slow cook which would be considered barbecue,” explains Haas.

You might also have come across the term ‘smoking’ in relation to barbecuing and wondered what that actually means in reality. According to Haas, smoking and barbecuing both use indirect heat to cook foods. The main difference is how much smoke the meat is subjected to. When smoking meat, a pitmaster typically uses an offset smoker or pellet/grill smoker, which uses wood as the heat and smoke source.

These are left to run at low temperatures ranging 93°C to 140°C for hours which Haas says allows the wood to give off a blue smoke which is perfect for smoked meat.

The market (and the Internet) is saturated with information about barbecue sets, so it can be difficult to know what the difference is between each one.

According to Haas, there are a few things to consider in a barbecue set, with the most important being the selection of the type of fuel.

For gas grills, there are two primary types: natural gas and propane.

“Natural gas needs a mainline gas hook-up, where a propane grill uses a tank filed with propane that hooks up directly under the grill. Gas grills are built specifically for propane or natural gas and you cannot simply switch between the two gases,” says Haas.

Incidentally, gas grills are the most popular and easiest grills to operate for home users eager to get acquainted with barbecuing. A 2015 article in National Geographic indicated that at least 60% of home barbecue sets in America are of the gas variety. 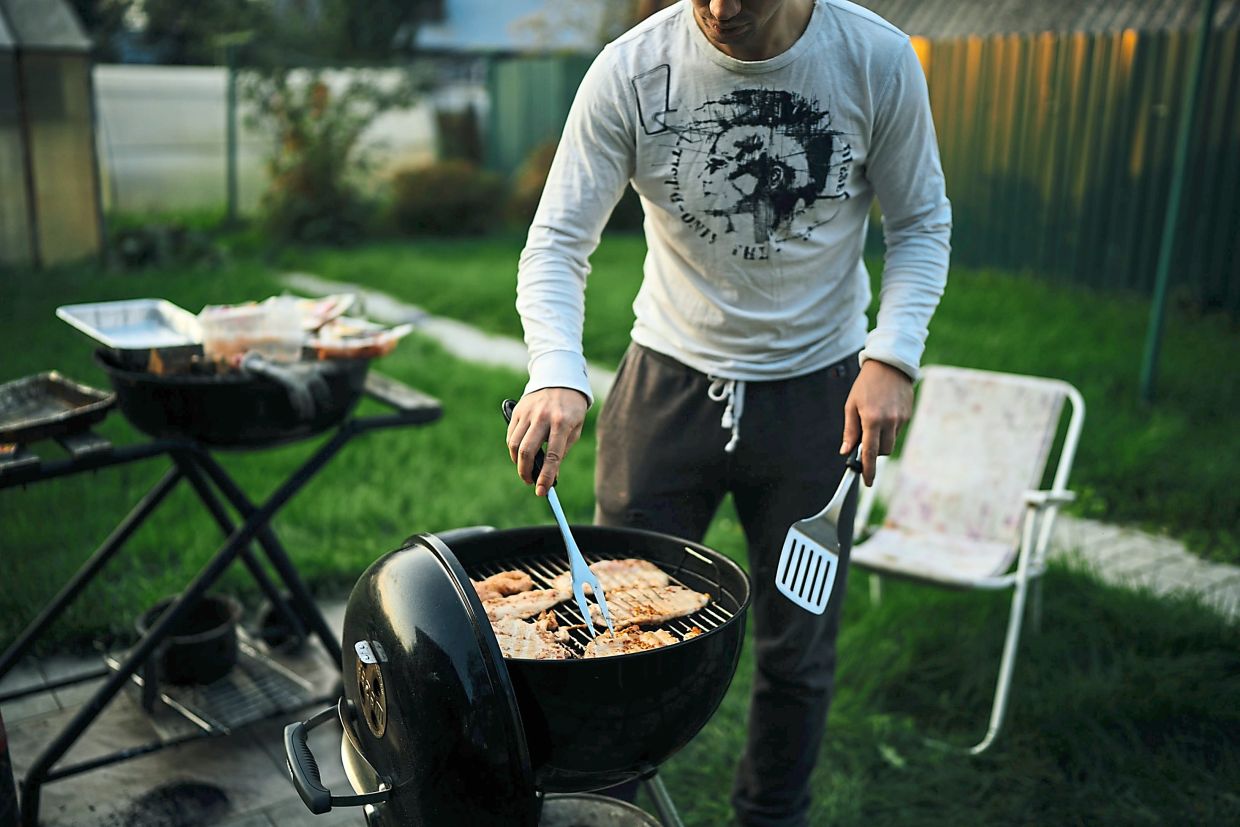 In the past, Malaysians invested in larger barbecues designed to cater for large parties or functions, but during the pandemic, most people have been buying smaller units designed for small families. — EGOR GORDEEV/Unsplash

Charcoal grills meanwhile use charcoal briquettes (which were invented based on a process adopted by industrialist Henry Ford and a briquette factory designed by Thomas Edison!) or lump charcoal and give off a more natural smoke/charred flavour to the food. Based on Haas' observations, these kind of grills require more supervision while cooking and usually take longer to grill compared to a gas grill.

Then there are pellet grills, which use hardwood pellets for fuel. “These types of grills are convenient and tend to have more features than other types of grills. Yet, those features tend to come at higher costs.

“Pellet grills are very universal cooking appliances as they give you the ability to not just grill but also smoke your food at low temperatures. These grills have become very popular in the last decade,” says Haas.

In Malaysia, the average Malaysian spends upwards of RM1,000 on barbecue sets – mostly of the gas or charcoal variety for people who live in landed properties and electric grills for those who live in high-rise dwellings, according to Yap.

She also adds that the pandemic has drastically changed the kind of barbecues that Malaysians are purchasing. While in the past many Malaysians would buy large barbecues/grills to cater for gatherings of up to 20 people, these days, the average purchase is for smaller units designed for families of four, in keeping with the exigencies of the pandemic.

“That’s the biggest purchasing change we’ve seen, people are buying smaller units. Another trend that has emerged is that many Malaysians are now really into Japanese-style Hibachi tabletop grills. That has become very, very popular during the pandemic,” she says. 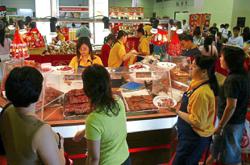