Ideal dish for the holidays

I have always enjoyed cooking together with friends as it gives me a chance to share recipes as well as learn new ones.

A friend of mine made this amazing roast pumpkin dish and it is just perfect for the holidays.

This is a shout-out to Cathy Hine from Australia, who came to Malaysia for a short stint a few years ago and invited me over to her apartment on several occasions for a cookout.

Although roast pumpkin is often featured at Christmas dinners, her twist on it with quinoa made this dish pop.

It was my first time tasting quinoa and I fell in love with the texture of the grain.

If you have never cooked quinoa before, just remember this ratio: two cups of liquids for every cup of grain.

You may substitute water with broth or an infusion, but retain this proportion because you want the quinoa to be al dente and not mushy or crusty.

I have used white quinoa in this recipe but you can also use red or black quinoa or a mixture of the coloured grain.

This dish can be served as a side dish and is a good complement to main meat dishes.

And it can definitely substitute any rice or carbo dish that you may serve with the mains.

I am using local favourite calabaza pumpkin, which has an incredibly sweet flavour and as it roasts, its sugars caramelise into a nice smoky glaze.

The toasted pumpkin seeds give a nice crunch to the dish too.

A surprising flavouring for me was the addition of orange zest and juice which gives this dish a burst of freshness.

You may also garnish the dish with pieces of orange segments, which add more flavour and visual appeal.

I have also made this same dish with sweet potatoes instead of pumpkin and it was quite well-received.

That is one of the hallmarks of a great recipe — it is versatile and lends itself to experimentation.

I hope you and your family will enjoy this dish that truly celebrates the festivities. Happy holidays.Roast pumpkin salad with quinoaIngredients1kg calabaza pumpkin

MethodRemove peel and seeds from pumpkin. Cut pumpkin into 1-inch cubes and spread on roasting pan.

Split whole garlic bulb into two cross-sections and break into smaller segments. Scatter all over pumpkin in roasting pan.

Generously drizzle extra virgin olive oil all over the pumpkin and garlic. Season with salt and freshly ground black pepper.

Roast in a 200°C preheated oven for 25 minutes until pumpkin has lightly crusted and garlic softened. Allow to cool, then remove garlic peel.

In a roasting tray, spread out pumpkin seeds and toast in oven at 200°C for 10 minutes. Allow to cool.

Rinse one cup quinoa until water runs clear. Drain off water and place in pot. Add two cups cold water and bring to a boil. Reduce to a low heat and simmer until all the water has evaporated, usually about 10 to 15 minutes. Stir in salt to taste and immediately cover with a lid and steam for 5 minutes.

Toss together before serving, garnished with orange zest. 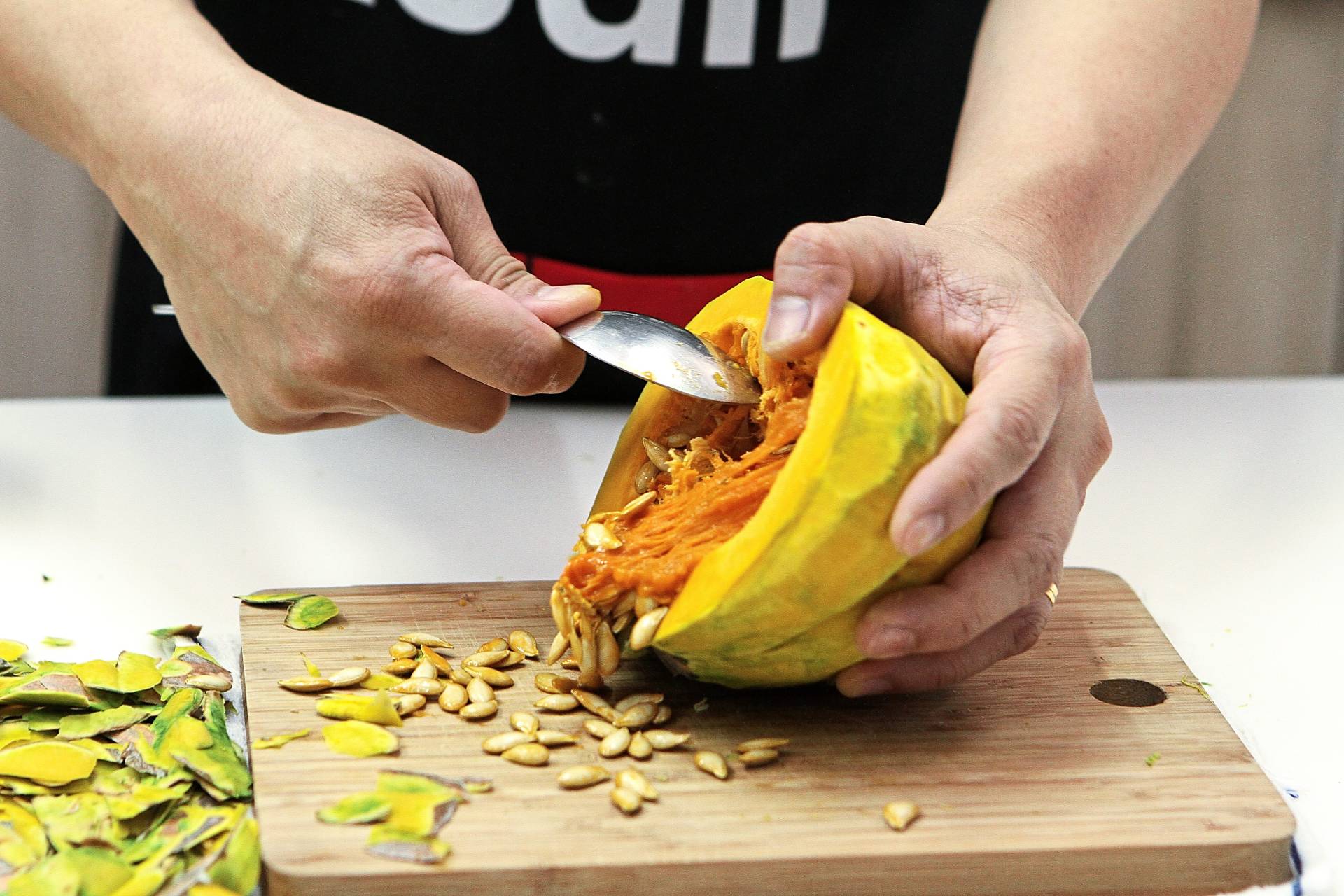 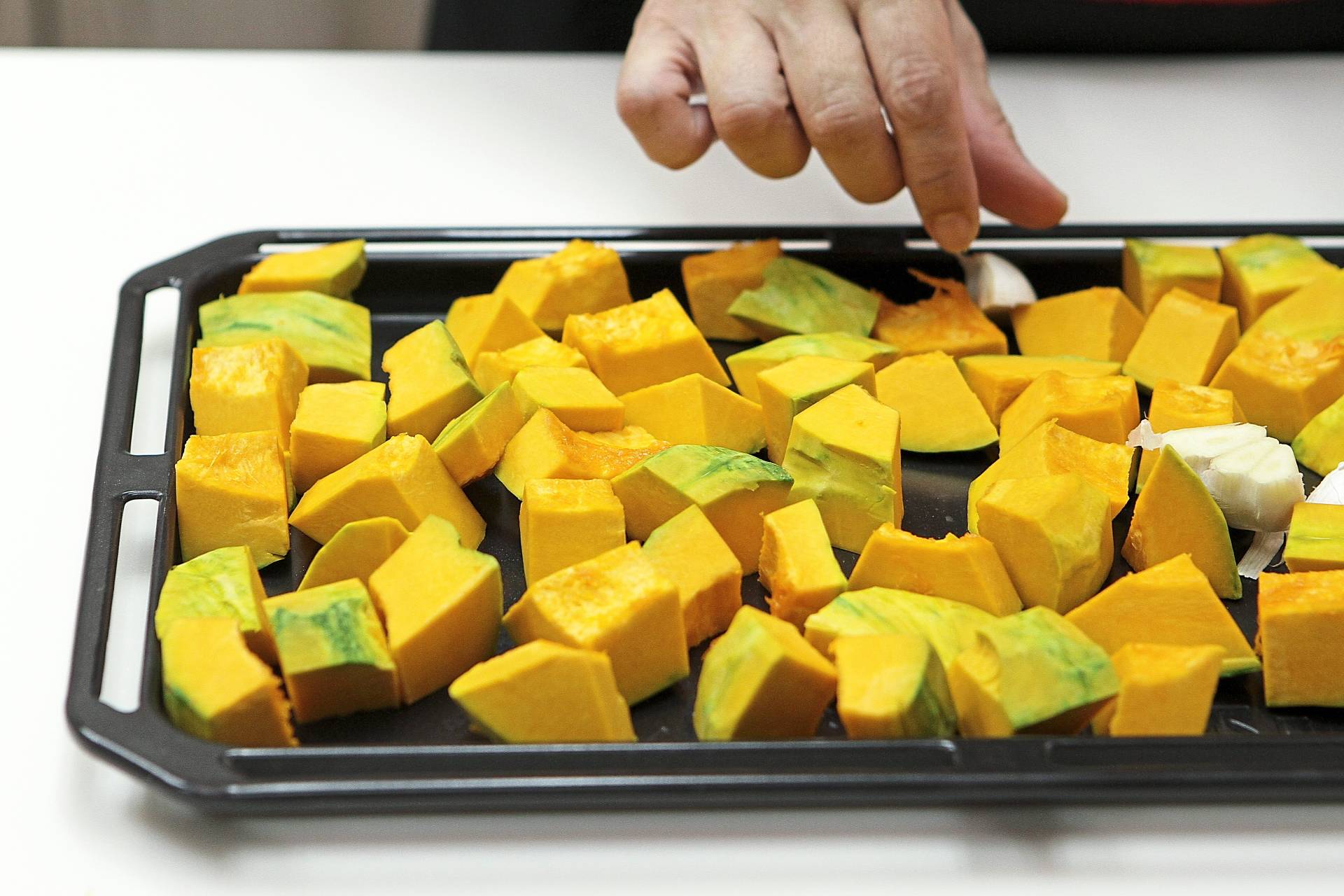 Place the pumpkin on a tray and sprinkle some salt and pepper and drizzle extra virgin olive oil before roasting.

Roast the pumpkin seeds until crisp.

Roast pumpkin salad with quinoa is a tasty and healthy option for a meal.