to manage two hotels — Four Points by Sheraton Puchong and Le Méridien Putrajaya, slated to open this year and next year, respectively.

These two new hotels will add 599 rooms to Starwood’s robust portfolio in the country and reflect Starwood’s desire to expand into the fast growing districts of Malaysia. Puchong and Putrajaya are part of the Klang Valley area, which includes Kuala Lumpur and its suburbs and adjoining cities and towns in the state of Selangor.

“We are delighted to announce the Four Points by Sheraton and Le Méridien in the Klang Valley, underscoring our expansion plans in Malaysia, one of the world’s most dynamic destinations,” said Starwood Hotels & Resorts South-East Asia regional vice- president Chuck Abbott. An artist’s rendering of what will be the Sheraton Puchong’s dining area called the The Eatery.


“We look forward to further strengthening our footprint in the country as we welcome these two hotels into our portfolio,” he added.

“IOI Properties is happy to partner Starwood Hotels and Resorts to expand the Four Points by Sheraton and Le Méridien brands in the Klang Valley. The hotels will be considered landmark developments within the two townships and contribute positively towards their growth and our portfolio,” said IOI Properties Group Bhd chief executive officer Lee Yeow Seng.

Scheduled to open in the fourth quarter of 2014, Four Points by Sheraton Puchong is strategically located in the heart of Puchong’s developing business district, Puchong Financial Corporate Centre (PFCC) at Bandar Puteri Puchong. Puchong is emerging as a major town in the Petaling district.

The hotel is located about 32km from the Kuala Lumpur International Airport; and is approximately a 20-minute drive to the Kuala Lumpur city centre. The hotel will be conveniently accessible by public transportation, and only be a short walk from the LRT station due for completion in the first quarter of 2016. 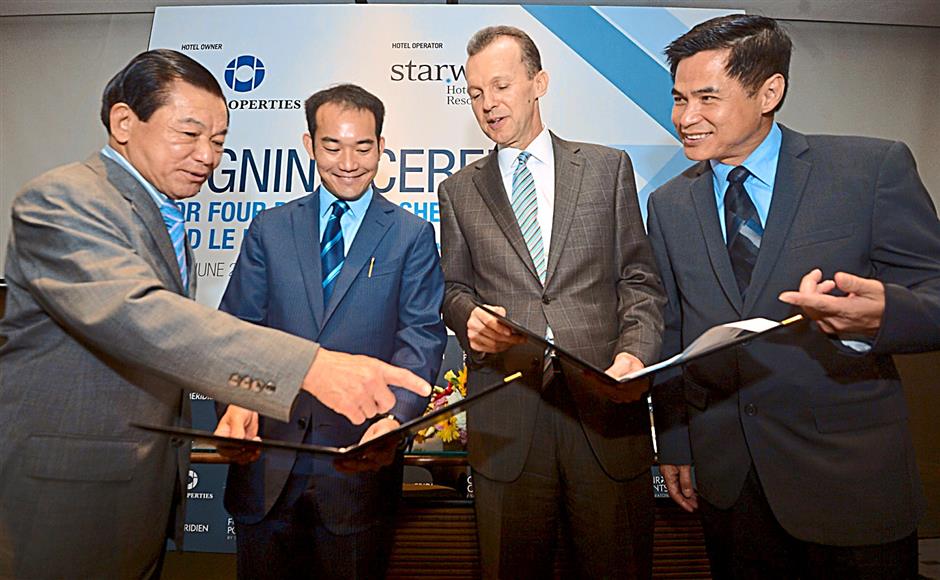 
Four Points by Sheraton Puchong will feature 249 stylish and contemporary guestrooms, including 12 executive suites designed for a comfortable stay.

The hotel will also feature a total of 1,100sq m of meeting space, including an 800sq m grand ballroom. Additionally, the hotel will have a swimming pool, two food and beverage venues including the brand’s signature restaurant, The Eatery; a fitness centre; and a variety of other amenities such as free Wi-Fi, all amenities that make the Four Points brand a favourite with travellers worldwide.

Strategically located in Malaysia’s federal administrative capital, Le Méridien Putrajaya will be situated in close proximity to the city’s commercial and retail areas, including the IOI City Mall, which is slated to open later this year.

The hotel will offer 350 guestrooms, all outfitted with what the company calls its signature Le Méridien beds. Le Méridien Putrajaya will feature two innovative restaurants concepts, fitness centre, spa facilities, and a swimmingpool.

The hotel will have more than1,630sq m of state-of-the-art meeting and event space, including a grand ballroom. Le Méridien Putrajaya will also feature the signature Le Méridien Hub, which re-interprets the traditional lobby into a social gathering place, and further builds on the brand’s awardwinning arrival experience and coffee culture.