Avani Sepang Gold Coast Resort is the first of the Minor International Pcl (Mint) venture in Malaysia but the property will not be the last of their investments in this country.

Its owner American-born billionaire William Ellwood Heinecke, who arrived here in his private jet, said he has set his eyes on Malaysia.

“Sepang is a wonderful opportunity and a perfect getaway as a luxury hotel in this region. I believe the resort will attract many tourists,” he said.

He said the hotel’s beautiful architecture reminded him of the Anantara Dubai The Palm Resort and Spa.

“This venture marks an important milestone for the chain in this country,” he added.

Heinecke, a Thai citizen, who is also Mint chairman and chief executive officer, said the re-branding officially marked the hotel as one of the five hotels managed by Minor Hotel Group’s (MHG).

MHG is a hotel owner, operator and investor. It has over 100 hotels, resorts and serviced suites in operation under Anantara, Avani, Per Aquum, Oaks, Elewana, Marriott, Four Seasons, St Regis and Minor International brands in 14 countries across Asia Pacific, the Middle East, Africa and the Indian Ocean. The tycoon, who has more than 45,000 staff under him, credits his success to his great team.

“This success is not mine alone. It’s a great pleasure to work with an excellent team. All my staff is like my children. I make a point to hire executives who are smarter than me and remove mediocre staff. Only then you can see your company grow. Otherwise, the company will shrink,” said this 65-year-old businessman, who is worth US$1bil as of July 2013, according to Forbes’ rich list.

Heinecke founded the Minor Group in l967 and after three decades, it expanded to 30 companies. He has been Mint chairman since 1979.

Since acquiring his first hotel, the Royal Garden Resort in Pattaya in 1978, Mint has grown into one of the largest hospitality and leisure companies in the Asia-Pacific region.

“Running a hotel and a restaurant has similar rewards. It goes back to customers’ satisfaction. I always feel the most rewarding part in this business is staff development. I enjoy seeing how my staff rise from the ranks and become senior executives. It is also exciting to see how I’ve touched so many lives in all my 35 years,” said the bearded Heinecke, who has acquired more than 100 hotels and resorts, 1,300 restaurants and 200 retail-trading outlets.

The pragmatic wealthy man is a firm believer of “it is the people who made the company and not the other way round. I employ people with entrepreneurial skills.”

Despite the success, MINT still tries to meet the growing needs of consumers in Thailand and in 22 markets from Africa to Australia.

Heinecke’s success story began at 18 after he got married to the “right woman”, Kathy Heinecke.

“I made my first million after I got married. I was never the brightest student and I am self-taught. It’s all hard work.

“Everyone is created the same way, it is how we spend our hours that makes us different,” said Heinecke who was born in Virginia and grew up in Hong Kong, Japan and Thailand.

His father, Roy, was a United States diplomat in Asia while his mother, Constance, worked as an Asia correspondent for Time magazine. The family moved to Bangkok 50 years ago.

Like other teenage boys, he loved go-carts, motorbikes and cars but he did not go to college. His break came after he sold newspaper ads and formed his own advertising agency from the living room of his parents’ house. 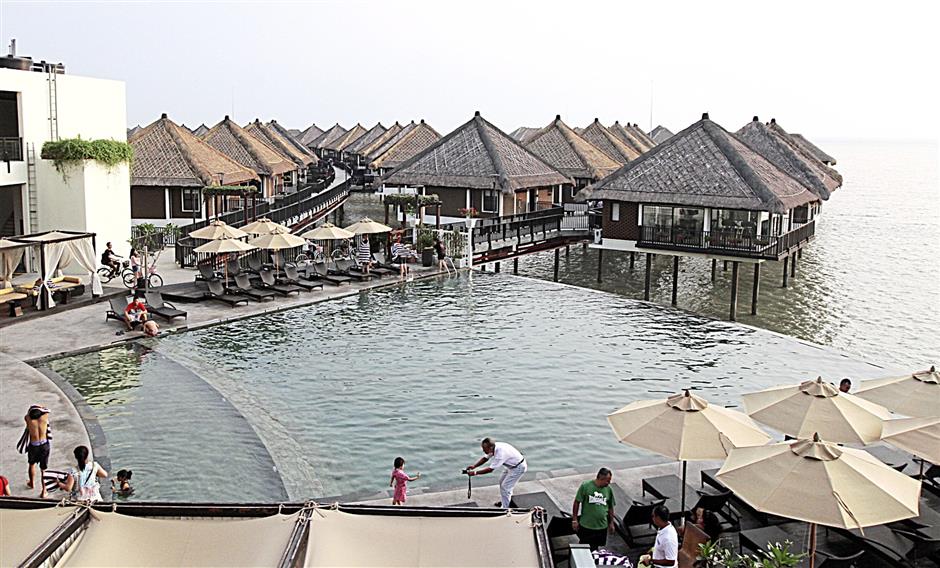 Avani Sepang has an enchanting view to charm visitors to the resort.

When go-cart racing became popular in Thailand, he convinced the Bangkok World editor to give him a weekly go-cart column.

His pay cheque was half of the ads he could sell and after a few months, he was drawing more than most reporters.

To double his income, he began cleaning offices at night, started a professional janitorial service, hired a couple of workers, printed a few dozen cards and eventually set up his first cleaning company, Inter Asian Entrepreneurs.

“I sold ads and worked at my advertising company after I got home. In the evening, I would go around and help my workers cleaned offices,” said Heinecke who has two sons.

With no college background and a very lean financial resources, young Heinecke marched into a lawyer’s office in Bangkok and gave US$1,000 to register two companies, Inter-Asian Enterprise and Inter-Asian Publicity.

The registration fee alone took most of the US$1,200, which he borrowed from a moneylender. He spent the leftover on mops and buckets and a few minutes of airtime on a local radio station.

He sold off Inter-Asian Publicity later to Ogilvy & Mather and founded his first company Minor Holdings at 17.

It is called Minor because he was a teenager when he founded it. By 21, while all his friends graduated from college, he was already a millionaire, a boss to 400 staff and grossed more than US$2.5mil a year which made headlines. Following the rebranding exercise, the property by the sea is known as Avani Sepang Goldcoast Resort.

Minor Holdings became The Minor Group over the next four decades, spanning more than 30 companies. In 1991, he gave up his US citizenship for Thai, a decision he never regretted.

At 50, Heinecke was the owner of an extensive business empire and became the most successful foreign businessman in Thailand and one of the most-talked about expatriate entrepreneurs in South-East Asia.

Heineicke, a well-respected figure in the business community in Thailand, was recently honoured with the Asia’s Leading Travel Personality award, for the driving force behind the leading global brands under the Minor Group umbrella.

However, he said he never allowed the millions he has to get to his head.

“I have to thank my strong-willed wife, Kathy who keeps me grounded. She has no qualms telling me to put the garbage out or put the toothpaste cap on.

“So, the 100 hotels don’t get to my head. I have my feet firmly to the ground, in that sense,” said Heinecke whose hobbies include scuba diving, collecting vintage cars, including a 1963 US$3mil Shelby Cobra and a Ferrari, once belonged to Clint Eastwood, luxury motor yachts and private jets like Cessna Citation X.

Heinecke, author of The Entrepreneur: 25 Golden Rules for the Global Business Manager, a best seller that had been translated into a several languages, believes that in a crisis it is better to control the expenses than to slash costs across the board.

“You can make a lot of mistakes and still recover if you run an efficient operation. The entrepreneur who controls his expenses better than his rivals will achieve a competitive advantage, especially when he or she demands the highest standards of quality and service at the same time,” he said.