Lowering the boom on pirates

A total of more 150 copies of suspected counterfeit Microsoft software were seized with a combined estimated retail value amounting to RM150,000.

THE Enforcement Division of the Ministry of Domestic Trade, Co-operatives and Consumerism (MDTCC) recently announced that its Shah Alam branch successfully raided a Klang-based syndicate involved in the distribution of suspected high-end counterfeit software passed off as original software and sold to unsuspecting resellers and end-user customers at premium prices.

MDTCC Selangor Chief Enforcement Officer, Othman Nawang said, “The successful raid was executed by a team of at least six personnel, including enforcement officers from the MDTCC Shah Alam branch with the assistance of Microsoft Corporation’s investigators and lawyers.

“In this operation, a total of more 150 copies of suspected counterfeit Microsoft software were seized with a combined estimated retail value amounting to RM150,000. The software titles of the seizure include Microsoft Windows 8 Pro.

“A 27-year-old man was arrested during a sting operation at a rendezvous point of delivering the suspected counterfeit goods to a purchaser. The suspected infringing goods were seized from the boot of the suspect’s car.

“Subsequently the suspect was charged at the Shah Alam Sessions Court for possession of 150 infringing copies of Microsoft software and bail of RM20,000 was imposed. The suspect was unable to post bail and has been in remand ever since. The next mention date is fixed for hearing in March”

The raid was conducted following a tip-off by the Microsoft Digital Crimes Unit after several months of intensive investigations on various online markets. 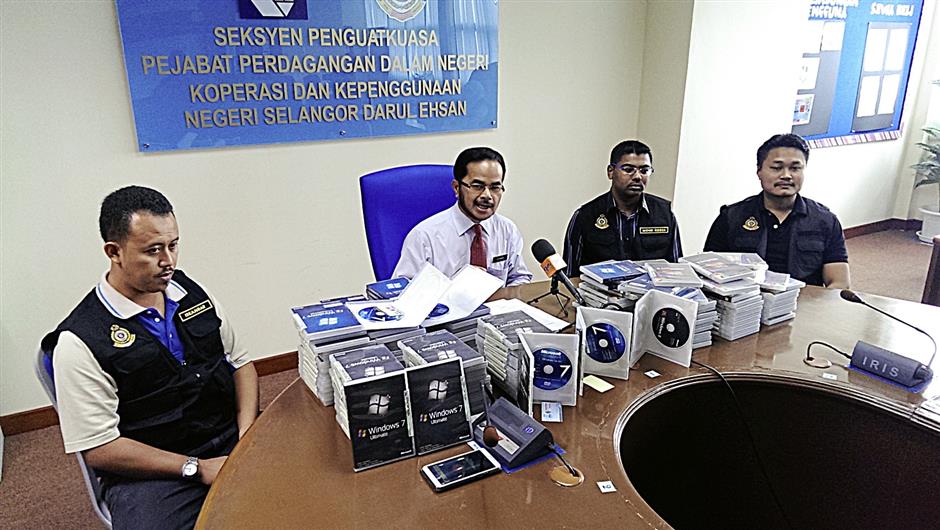 Othman (in white) speaking at a meeting to announce the seizure of the counterfeit software.

The raid has the biggest seizure among four actions taken by the ministry within the last 10 months. It is part of a series of raids on such counterfeit products that began in Johor Baru last year followed by actions in Klang and Kuala Lumpur recently. All the cases involve counterfeit software and Certificate of Authenticity (COA) labels.

“According to the Copyright Act 1987, distribution of counterfeit software is a criminal offence. Offenders risk criminal penalties or fines of between RM2,000 to RM20,000 for each infringing copy of software, and/or up to five years jail, or both.

“Company directors and owners may also be held personally liable and face similar penalties. MDTCC will take criminal action against the IT product distributor and its management if they are found to have committed criminal offences”, said Othman.

“Consumers must be extra vigilant when making computer purchases. Buy from a reputable computer dealer and insist on only genuine software.

“Computer dealers who buy these stickers and dupe customers into believing the software is genuine are now warned that the full extent of the law will be meted out against computer dealers who put consumers at risk of piracy and malware.

“Pirated software very likely contains viruses, Trojans and spyware that willjeopardize consumer safety. Some Trojans are designed to steal money from yourbank account and some spyware can even invade your family’s privacy by accessing your webcam and photos.” Othman said.

“According to a study conducted last year, 52% of new computers sold with pirated software sampled in Malaysia contained dangerous malware, with as high as 80% of pirated DVDs sampled containing malware.

“The safety and security risk in using software either illegally downloaded from the internet or purchased from counterfeit software cannot be underestimated.

“Malware is capable of all kinds of evil activities that can do an untold amount of damage without warning, like stealing confidential information as well as large sums of money,” said Jonathan Selvasegaram from the Microsoft Digital Crimes Unit.