DRINKING coffee is something enjoyed and looked forward to at any time of the day by many.

Sure, drinking too much could deluge your body with excessive amounts of caffeine but its popularity continues to soar and has evolved from the unassuming kopitiam (local coffee shop) drink into a nationwide lifestyle statement.

While some Malaysians still enjoy their daily dose of coffee at the kopitiam, others prefer it to come in a form of a particular brand and style — something they won’t mind paying more for.

As such, successful coffee and beverage companies have managed to capture the worldwide market due to their cleverly branded blends of coffee and coffee beans, as well as their coffee drinking environments that include the mugs, flasks, outlet deco and service.

All these elements have created a coffee culture that began around a decade ago and is prevalent among young to middle aged adults. The coffee industry is is fueled by those who just love coffee, as well as others who love to be seen drinking coffee at trendy outlets and cafes. Regardless, coffee is one of the most ubiquitous products in the world. 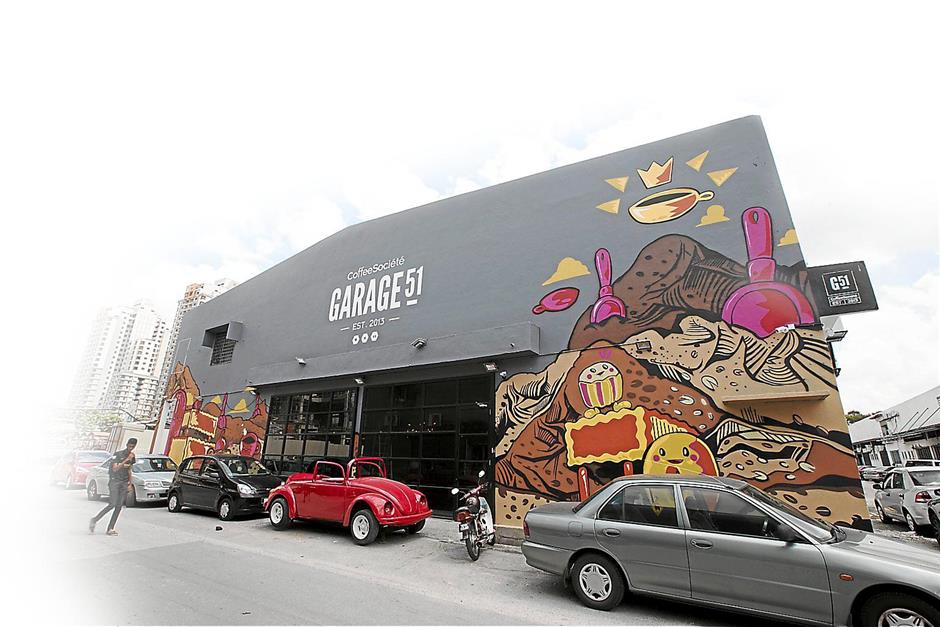 Retaining the best: There is a massive graffiti wall outside the cafe that was created by a screen artist friend of the Choongs.

Famous coffee brands have become global franchises just like some popular international fast food chains — where the taste and services are aligned to the same set of guidelines and standards.

While this is enjoyable for consumers as they are assured of consistent product and service quality, some independent business owners are creating their unique and distinct style of specialty coffee that they themselves would not want to replicate in more than one outlet.

Cuppa at the garage

At Garage 51 in Bandar Sunway, Petaling Jaya, this unique identity is what makes patrons flock to it as the cozy and laid-back ambience has no air of pretension or expectations to dress or talk in a certain way.

“The high ceiling was left as it was originally as we wanted to preserve the heritage of this building,” said Kar Heng, 23.

The brothers are hopeful that Garage 51 will continue to thrive as the café has received positive feedback since they opened three months ago. This is their second business after first opening CoffeeSociete in Publika in 2011. While that outlet leans towards more towards a sophisticated setting, the brothers wanted to expand and open another outlet with a different concept, hence they started Garage 51.

This is quite a feat for the young lads, but as clichéd as it may sound — it is their passion that drives them. For Kar Wai, in particular, being a recipient of “Malaysia’s Top 40 Entrepreneurs Under 40” award by Prestige Magazine, has further inspired him to keep pursuing his dedication to turn his passion into successful businesses.

While both brothers are certified baristas, Kar Heng did his barista course first in Melbourne after he graduated from Swinburne University while Kar Wai, a business management graduate, did his in Malaysia. He felt a strong desire to bring a little bit of Melbourne’s coffee drinking culture back to Kuala Lumpur.

“Garage 51 resembles similar concepts to independent coffee cafes in Melbourne where they do things to bring out the character and history of the original building. There’s also a massive graffiti wall outside which was done by a friend who’s a screen artist,” explained Kar Heng.

But Melbourne’s love and appreciation for independent coffee blends represents a matured market and market here in Malaysia is still in its infancy.

“The Malaysian market for specialty coffee is very small at the moment, where most people here are familiar with the big brands.

“It seems like they are used to drinking the mass-produced beverages and although there’s nothing wrong with that, the knowledge and level of appreciation here hasn’t reached that stage where people are able to identify the special and unique blends of coffee,” said 26-year-old Kar Wai, who’s worked in some established F&B companies.

An example of such unique blends of coffee refer to their “The Societe Blend” that consists of 100% Arabica beans as these are known to be among the best coffee beans, seconded by Robusta and Liberica. This blend originated from South and Central America and some regions of the Asia-Pacific.

“Our house blends uses a medium roast to give out a pleasant taste, not one that’s too bitter or strong which we believe isn’t what a good coffee should be. We don’t plan to have our types of coffee available elsewhere except here, so we hope our business advantage is our uniqueness,” explained Kar Wai. 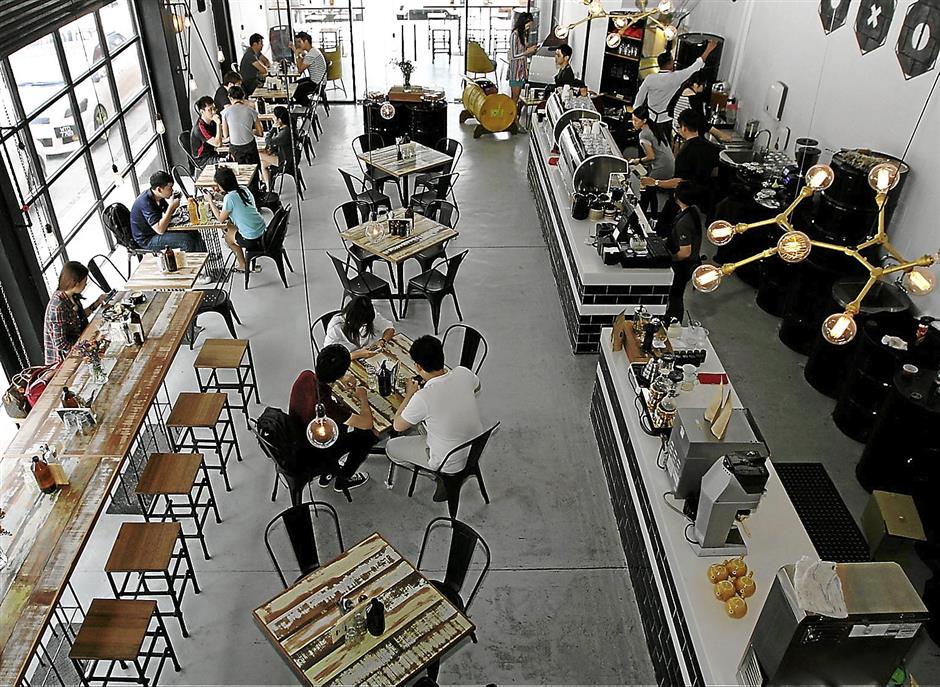 Plenty of space: The interior of Garage 51. The outlet has proved to be popular with those in the area.

The brothers see the concept of Garage 51 and their coffees the “third wave” of the coffee culture.

“The first wave was about drinking regular coffee mixes at home or in a local kopitiam.

“The second wave would be the big commercial coffee brands who have successfully marketed their coffee blends for a mass market, and we, as the third wave, brew our own style of coffee with one-of-a-kind instruments and methods,” Kar Wai explained.

One of their specialty drinks is the “Mochatella on Garage Coffee Cubes” that comprises a sinful concoction of frozen coffee and ice cubes that are mixed with Nutella.

Hot milk will be poured onto the ice to melt everything into a decadent liquid of chocolatey bitter-sweet indulgence. Aside from coffee and other beverages, the menu includes a variety of savoury mains and desserts.

The duo recalled that their first year in Coffee Societe was a very challenging one that left them contemplating closing down.

“We went against all odds and persevered by revamping the outlet, hired a new team, learned to train and motivate our staff. After about two months, we noticed that the patronage increased and our regulars brought their friends and relatives who became regulars as well. So, it’s all about a shift in attitude and not about giving up as that’s too easy,” said Kar Wai.

They’ve learned that talent is crucial in increasing profitability, especially for a small businesses.

“You can focus a lot on profit but that’s not going to happen if you don’t have the right people. Losses are inevitable in the first six months to a year after starting a business, but having good human capital on board will help you pick up the losses, break-even and then profit,” added Kar Heng.

In fact, one of the main attributes the brothers look for in a potential recruit is the willingness to learn that comes with a good attitude.

“We’re quite strict in our interviews and usually pose real-life questions to size up their character (without them knowing). So if we ask them what they think about and how do they save money, but their answer is something like, ‘I live for the moment’, then they should looking elsewhere for a job,” mused Kar Wai.