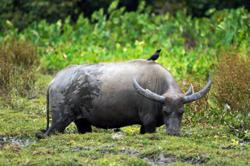 As part of its promo drive, MLA sponsored 29 lamb carcasses for the master butcher competition at Food Hotel Malaysia 2013.

THE MEAT business is probably as old as humanity, but it’s something we rarely think about.

However, the meat industry was in the limelight recently courtesy of Meat and Livestock Australia (MLA) taking a central role in the Food and Hotel Malaysia 2013 (FHM) trade show at the Kuala Lumpur Convention Center.

For an idea of how much Malaysians have grown to appreciate their meat, here is an interesting statistic provided by MLA regional manager Andrew Simpson.

“When Australia started exporting meat to Malaysia in the late 1980s, the quantity was only 1,000 tonnes a year. Today, the combination of chilled and frozen beef and lamb is about 40,000 tonnes a year, estimated to be worth A$200mil (about RM606mil). That makes Malaysia a very important market,” says Simpson.

Consider the kind of prices Malaysian consumers are willing to pay for premium meats; a piece of wagyu striploin with a marble score of 8+ for example, may cost RM109.82 for only 256gm. The very same cut with a lower marbling score of 6+, is a tad cheaper at RM82.57 for 230gm. The more affordable cuts like an Angus striploin retail at RM24.63 for 226gm.

Simpson reckons the early pioneers who got the ball rolling between the Malaysians and Australians were veterans, like See Wing Kee of Lucky Frozen Sdn Bhd and Lawrence Pok of Pok Brothers Sdn Bhd, who formed partnerships with exporters, processors (a pleasanter term for slaughter houses) and farmers.

“Back then, compared to the Japanese and American market, which today import 320,000 and 240,000 tonnes of meat respectively, Australia did not identify the Malaysian market for what it was — up till five years ago. “This was when Australia took the big step to obtain special accreditation for its meat plants to comply with the halal status sought by Malaysia’s Department of Islamic Advancement (Jakim). In fact, halal processing in Australia had begun as far back as the 1970s to cater to the South-East Asian and Middle-East markets,” says Simpson.

Burgeoning appetites aside, credit also goes to marketing efforts — and perseverance. Rose Yong, now MLA country manager, says when she started as a fresh sales representative working from a home office in 1998, her only companion was an electronic typewriter.

“Meat inventories in supermarkets then were largely made up of New Zealand and US exports so we had to create demand for Australian meat. To penetrate the market, we aimed for two areas — retail and food service. One of my first customers was Hock Choon Supermarket, then owned by Diana Lim, before it was sold to Jaya Grocer. I recall arriving at her office at 10am, but she was so busy with store operations I had to wait till 4pm!” recalls Yong who finally convinced Lim to give her a small section at their butchery counter.

Once she got her foot in the door, Yong wasted no time.

“We gave our customers samplings where we had promoters cooking our beef and lamb so shoppers could get their first taste of Australian meat. The customer education plan was instrumental in pushing our products to the forefront,” says Yong.

Much effort was also made to penetrate the Chinese banquet sector. Realising the cooking of lamb and beef had evolved little in Chinese restaurants, MLA introduced the Red Majesty Chef programmes in 2010 where 100 Chinese cuisine chefs were exposed to a year-long culinary series that included visits to meat farms in Australia.

“The programme’s focus was the banquet sector where new cooking techniques were introduced. In Chinese cooking, stir-frying is the norm for cooking, but when you have to feed 5000 guests who will consume approximately two tonnes of meat, this will be very time consuming, not to mention tiring. So, we introduced the use of technology such as Combi ovens to cook large batches of meat and preserve texture and flavour,” says Rose.

MLA has invested heavily in promotion and educational drives in Malaysia over the past 15 years. For the master butchery competition at FHM 2013 alone, MLA provided 29 lamb carcasses for participants to utilise.

This does not include meat used in other culinary competition categories for mains and appetisers where students from Yong’s “culinary and butchery theatre”, Beyond Culinary, also took part. The MLA is also no stranger to organising special appearances by celebrity chefs like Jasmine Said, former executive chef of the Queen Elizabeth luxury cruise liner and master butcher Alan Palmer, who presided as judge at the FHM 2013 butchery competition. 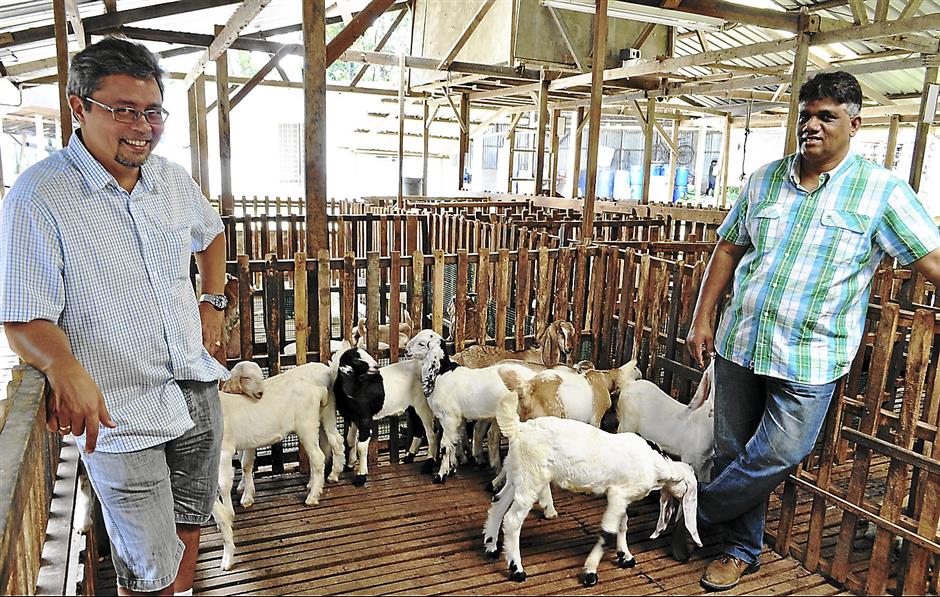 “The fact that we have given chefs and shoppers ideas what to do with our meat has contributed greatly to sales,” says Simpson.

“Chefs love our cost saving ideas. For example, we have shown them how to obtain a similar texture to tenderloin cuts from the rump which is about RM23 a kilo as opposed to the actual tenderloin, which is RM30 a kilo,” he adds.

Just how lucrative is the meat market?

Amurthalingam Muthiah of Tomara Agro Resources, a local farm development consultancy and livestock supplier, says prospects were attractive enough to lure him away from his jasmine flowers business. This was in 1997, when jasmines were fetching RM600 to RM800 per acre, double the price of palm oil. Currently, Tomara largely deals with ruminants like goats, sheep and horses (commercially known as dog meat and used in canned pet food). He also supplies camel, ostrich and venison to niche markets.

“When I found the business contact to venture into livestock in 1999, I knew I was looking at a universal need. True enough, in a year, I made ten times more than the jasmine business,” says Amurthalingam, who reveals revenues can touch RM1.3mil a year.

Today, the bachelor’s focus is on cabritos, young male goats aged no older than six months, weighing between 18 to 22kg each. Supply is obtained from select meat and dairy farms in Negri Sembilan, Pahang and Perak.

The demand for cabritos began in 2000 together with the mushrooming of Middle Eastern restaurants here. Cabritos are considered ideal for the Middle Eastern diet as they were leaner and without marbling. The current market price for cabritos is RM70 per kilo, about RM700 a head, compared to regular adult goats, which are priced between RM500 and RM600 each.

Amurthalingam says Malaysia is currently only 20% self-sufficient when it comes to meat.

End result: Beefing up a dish for sampling. The taste test always speaks louder than words.

“Largely, it has to do with local mindsets about the livestock industry. Due to this, we have lagged far behind, especially in research on crucial issues like precision farming to improve yields with less acreage. At present, most cattle farms are located in palm oil estates as regulations dictate that livestock farms must be 3km away from housing estates.

“The usual set up for meat cattle farming is about six cows to an acre based on a cut-and-carry arrangement (where cut grass is brought directly to the cow sheds). One other threat to the industry is theft, a rampant affair. It is not uncommon to hear of robbers tying up a farmer and making off with his entire flock! Next is smuggling along the Thai and Indonesian borders,” he says.

Currently, the cost for feeding a local cow for meat hovers around RM3.50 to RM7 a day, plus vitamin injections. It takes about two years for a cow to mature. A live cow can command up to RM6,000 a head, at today’s prices.

But being in the meat business is not only about livestock. There is the question of pasture and the grass is looking very green here.

“Let’s not forget that a cow needs close to 40kg of grass a day,” says Amurthalingam who stresses feed as the most crucial aspect for meat farms, in addition to hygiene.

Answering this call for livestock feed is Azlan Abdul Karim and his company, Sweet Grass, a year-old venture in Kampung Tengah, Lenggeng, Negeri Sembilan. The airline security head saw a niche when his wife, who works with the Veterinary Services Department, confided local farmers were complaining they could not find enough feed for their livestock.

At present, the common daily menu for livestock is a salad of leucaenas, acacias, oil palm fronds and Indian napier grass.

“Logistically, it is a challenge for a farmer to manage the growing of feed for his livestock because of land scarcity. So, I started a 1½ acre grass farm in July last year,” says Azlan who grows Indian napier because of its high protein content.

Taking it a step further, Azlan has also started making sileage, fermented Indian napier grass mixed with molasses, salt, enzymes and a special nutrient powder imported from the US that contains 69 micro nutrients. The fermented grass is packed in 42kg plastic drums and sold for RM15 each. The idea is to provide the farmer a convenient solution for rainy days.

This is not entirely a new idea as the Veterinary Services Department has been teaching farmers how to do it since the 1970s. Currently, sales have reached RM3,000 per month, but by the time the farm reaches full capacity, sales should touch RM10,000.

The challenge is in meeting market expectations as cattle farmers are very sensitive to cost. But Azlan hopes the convenience of regular supplies, freeing the farmer to focus on animal well-being, will be a selling point.

Lastly, comes the question of animal welfare. Though Amurthalingam maintains farmers do not develop emotional attachments to their livestock, there is a code of conduct to ensure the animals are treated as humanely as possible during their short lifespans.

“You must remember animals have feelings too. For this reason, an animal should never be slaughtered in front of other animals but in an enclosed area. Even then, killing is done in a humane way where the animal is knocked unconscious first so that it does not struggle,” says Amurthalingam.

He also points out that people should refrain from wasting food out of respect for the animal’s sacrifice.