Educational: Guides explaining to visitors how the Elephant Clock that is part of the exhibition works.

THE AWARD-WINNING 1001 Inventions exhibition, a global exhibition uncovering 1,000 years of science and technology in Muslim civilisation, is now open at the National Science Centre, Kuala Lumpur until Feb 28, 2014.

Voted the world’s Best Touring Exhibition by the Museum and Heritage Excellence Awards in London in 2011, 1001 Inventions had already received more than three million visitors and more than 60 million viewers online since it has been on display in London, Turkey, New York, Los Angeles, Washington, Abu Dhabi, Dhahran, Doha and Karlstad.

Science Discoveries Sdn Bhd operation director David Oh Seong Keat said the selection of Malaysia as the location for the exhibition’s Asian premiere was an important milestone for Malaysia’s exhibition industry as it proved that the nation had the credentials to host internationally-acclaimed exhibitions.

“The 1001 Inventions exhibition will introduce Malaysians to a world of science and technology that will inspire our younger generation to become the pioneering minds of tomorrow.

“It is a powerful educational tool that brings the history of Muslim civilisation to life in high-tech, exciting and engaging ways that will appeal to schoolchildren and adults alike.

“And, launching a global success like 1001 Inventions in Malaysia will also boost our nation’s tourism industry as it is a unique, world-class exhibition,” Oh said.

The Malaysian version of the exhibition features more than 60 exhibits targeting all age groups.

The hands-on, interactive and state-of-the-art family-friendly show introduces visitors to the wonders of scientific advancement we have inherited from Muslim civilisation.

Split into five zones, the exhibition reproduces some of the most astounding inventions of the Middle Ages and demonstrates the broad influence that Muslim civilisation has had on the way we live our lives today.

It features a diverse range of exhibits, interactive displays and dramatisations and shows how modern inventions, spanning fields such as engineering, green energy, mathematics, medicine and architecture that can trace their roots back to Muslim civilisation.

1001 Inventions exhibition was developed by 1001 Inventions Ltd from the UK and its range of exciting and engaging educational experiences were researched by more than 50 of the world’s leading academics from universities in Europe, north America, Africa and Asia.

“Visitors will be introduced to the wonders of Muslim civilisation through an award-winning educational film, The Library of Secrets, which will be projected onto a 5m-high screen.

“This will give them a better understanding and appreciation when they start exploring the main exhibition” Oh said.

Oscar-winning actor Sir Ben Kingsley plays renowned 12th century engineer Al-Jazari, who introduces the wealth of innovation and advancement that occurred throughout the Muslim world from the 7th to the 17th centuries.

Deputy Prime Minister Tan Sri Muhyiddin Yassin is the patron of the 1001 Inventions exhibition in Malaysia.

The exhibition is open daily from 9am to 5pm and admission is RM20 for adults and RM15 for children. A package price for families is RM60 (two adults and two children), and students aged 17 and above with valid student ID and senior citizens will be charged RM15 each. Group packages are also available.

and supported by the Tourism Ministry, Tourism Malaysia and the Education Ministry. 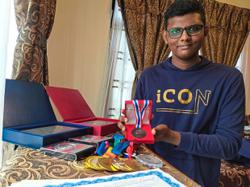