S&P Global, in a statement, said the latest reading pointed to a more marked slowdown in business conditions which was the strongest since August 2021.

The latest PMI reading is representative of approximately 5% year-on-year growth in Malaysian gross domestic (GDP), thereby signalling a slowdown in growth from the situation in the third quarter of 2022. 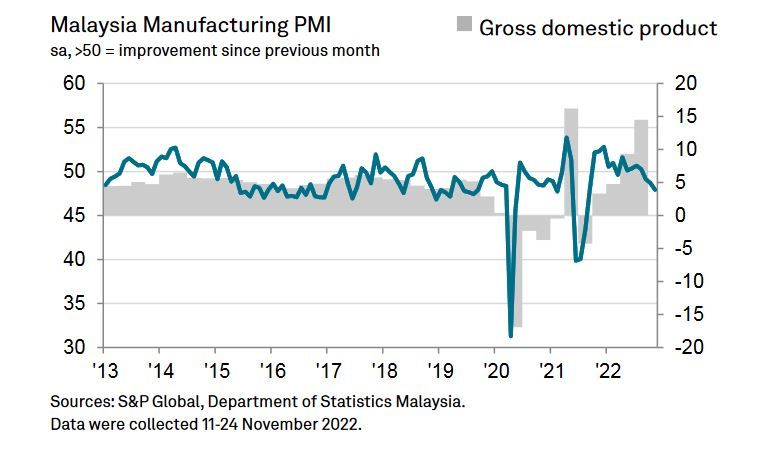 “There was a solid slowdown in production levels was and the fastest scaling back in order book volumes since August 2021. The aforementioned fragility in demand became a running theme throughout the survey data and was reportedly the primary factor driving moderations in input buying, stocks and business confidence which, though still positive, slipped to a five-month low.

“There were, however, some more encouraging aspects in the November data. Further signs of easing supply pressures were displayed in November, as indicated by the latest lengthening of suppliers’ delivery times being the softest in three years and only marginal overall. Meanwhile, both input cost and selling price inflation ticked up very slightly from October but remained well-below the rates seen earlier in the year,” she added.

S&P Global said In line with the headline figure, there were further signs of waning demand in November with order book volumes losing further momentum.

The moderation was the sharpest in 15 months and was driven by muted underlying demand conditions. Malaysian manufacturing firms registered similar trends for international sales volumes. New export orders were scaled back for the fifth time in as many months and at a solid rate.

Meanwhile, output moderated for the fourth month running midway through the final quarter. Survey respondents reported that drops in production levels were reflective of the aforementioned demand conditions.

Muted demand conditions reportedly led firms to scale back input buying in November and at the fastest pace since September 2021.

Malaysian manufacturing companies, however, remained hopeful that demand conditions would normalise over the coming year, as signalled by a seventeenth consecutive month of optimism regarding the year-ahead outlook for production.

That said, the pace at which input prices rose was the second-slowest since November 2020. Firms reportedly continued to partly share the burden of rising input costs with their clients in the form of higher selling prices. The rate of output price inflation, however, was only mild and below its historical average