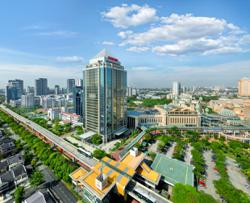 is expecting a further rebound in its operations underpinned by the continued recovery in the economy.

“The improving domestic economic outlook augurs well for the group. With the anticipation of normalisation of international travel, the group expects its leisure, hospitality and healthcare segments to benefit from the improving inbound tourism sector,” Sunway’s chief financial officer Chong Chang Choong said in a statement.

“However, the recent monetary tightening policy undertaken by Bank Negara may affect the sentiment of home purchasers, but its consequential impact may be mitigated by the sustained economic recovery,” he added.

Sunway said the improved quarterly performance from its property investment, construction, trading and manufacturing and healthcare segments contributed substantially to the improved performance.

The group noted that while pre-tax profits were higher in the quarter, several business segments such as property development, quarry and others delivered lower profit contributions.

Pursuant to the Malaysian Financial Reporting Standards 15, development profits from two of the group’s ongoing property development projects in Singapore will only be recognised upon completion and handover of the projects, which is expected to be in the financial year 2023 (FY23), it stated.

“The accumulated profit of these projects amounted to RM101.7mil, of which RM14.2mil was recorded in the current quarter, but was not recognised,” it added.

“The higher revenue in the quarter was mainly due to higher sales and progress billings from ongoing local development projects and revenue recognition from two joint venture companies which became subsidiaries in the previous quarter,” it said.

“The higher profit in the previous corresponding quarter was mainly boosted by the stronger profit recognised from a completed and handed over local development project,” the group noted.

Its trading and manufacturing segment saw an improvement in financial performance in the quarter due to higher demand for its products in the domestic market and gradual recovery seen in overseas markets.

Sunway’s quarry segment saw higher revenues in the period due to higher sales volume and average selling prices of aggregates and premix.

Pre-tax profit for this segment was lower due to higher production costs, it said.

“Barring any unforeseen circumstances, the group is confident its financial performance for the FY22 will remain satisfactory,” Chong said.