PETALING JAYA: The prospects of renewed foreign portfolio inflows into Malaysia’s equity and bond markets, at least for the final quarter of 2022 and heading into 2023, are highly envisaged by analysts and economists.

According to Kenanga Research, modest capital inflows are expected going forward as foreign investors return amid the onset of domestic political stability under the new unity government and improving global risk sentiment.

The markets have also begun to expect a less hawkish US Federal Reserve (Fed), especially after the latest Federal Open Market Committee minutes confirmed that most Fed officials were in favour of slowing the pace of rate hikes, which has curtailed global risk-aversion, the research house said.

However, there is a risk of outflows in the first quarter of 2023 (1Q23) given the widening divergence between Bank Negara and the US Fed policy rates, according Kenanga Research.

The federal funds rate could potentially be reaching 5% while Malaysia’s overnight policy rate is expected to top at only 3%, it said.

Having said that, Kenanga Research reckoned the outlook would brighten from 2Q23, as “we expect a stronger return of risk-on sentiment and capital inflows, when most major central banks complete their tightening cycles and as the Fed potentially signals rate cuts towards the end of the year due to a widely anticipated US recession.”

On the local bonds, the research house expects foreign demand to rebound in the near-term following the resolution of the domestic political impasse, and amid a marked global improved appetite for risk as markets continue to price in a less hawkish Fed. 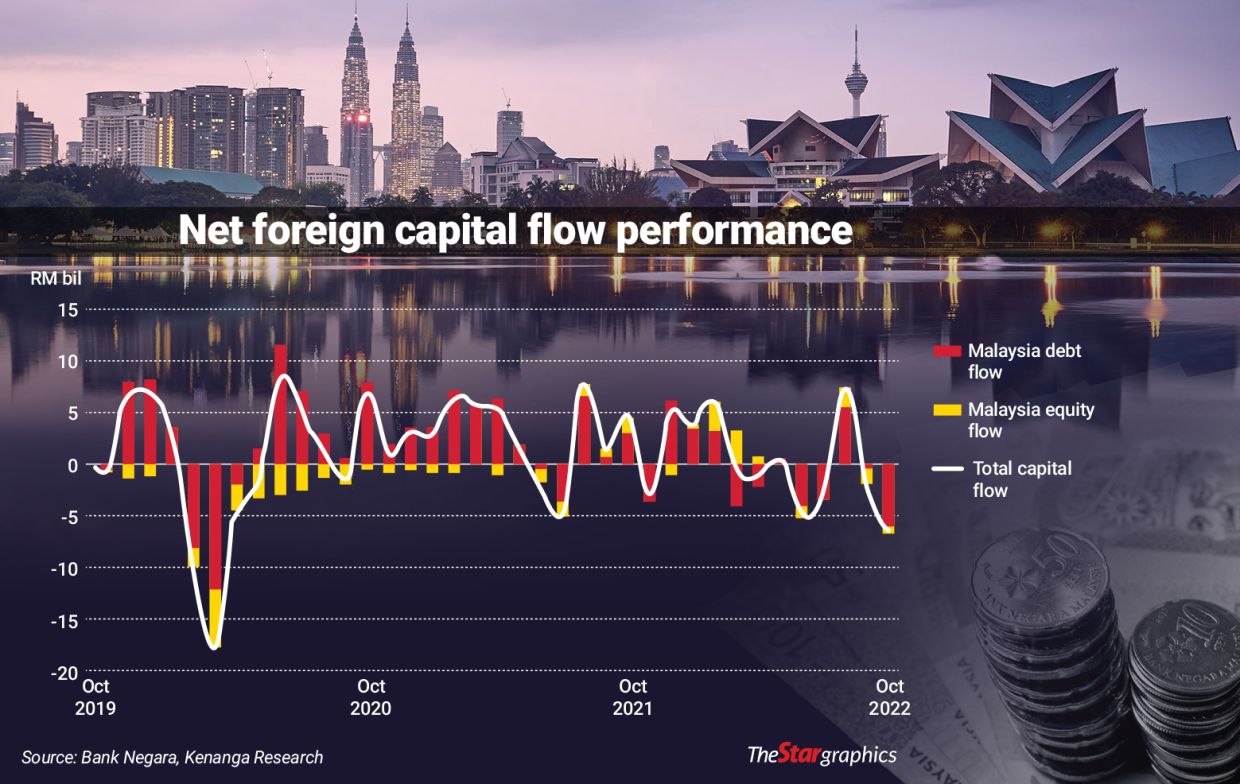 It noted both Malaysian Government Securities (MGS) and the syariah-compliant Government Investment Issue (GII) bonds trended range bound for most of last week before turning considerably lower last Thursday following the appointment of Datuk Seri Anwar Ibrahim as Malaysia’s 10th Prime Minister, and the confirmation of a unity government led by Pakatan Harapan.

Kenanga Research, which anticipates most major central banks to be completing their tightening cycles – in tandem with the apparent mood emanating from the Fed – and as such is projecting foreign capital flows to chart a strong return to the country from the second quarter of 2023.

For the upcoming GII reopening auction of 30-year bonds maturing in May 2052, it is anticipating an issuance of RM5bil, a 67% increase over the previous issuance of RM3bil back in May.

“For this auction, we expect solid demand despite the potentially larger issuance, driven by renewed optimism following the political breakthrough and the likely return of foreign investors,” said Kenanga Research.

Meanwhile, the resolution of the 15th General Election (GE15) deadlock on Nov 24 has also bolstered the local equity market.

This was despite the bonds and stocks generally move inversely of each other as investors would usually flock to lower-risk government debt instruments if they perceive equity sentiments to be weak.

However, as bond yields lowered signalling increasing demand, the FBM KLCI recorded what research outfit CGS-CIMB Research called a “relief rally” of 4% to close at 1501.88 points last Thursday, upon confirmation that Anwar would take the country’s top governmental post, before tapering off to 1,486.78 the following day.

While sharing the optimism of Kenanga Research pertaining to the return of foreign investors, CGS-CIMB Research analysts Ivy Ng and Nagulan Ravi said pending more details on the structure of the unity government, there could be lingering concerns over the fragility of potential alliances due to their different ideologies.

“The market will be closely watching the announcement of the cabinet line-up which we estimate could take between seven and 10 days; the first sitting in Parliament on Dec 19 and the tabling of a provisional and full Budget 2023,” Ng and Ravi said in a recent note to clients.

and Sports Toto Bhd, which witnessed their share prices dive on the first trading day after GE15 on Nov 21 with some counters losing over 8.5% due to concerns that a Perikatan Nasional-led government may not bode well for them, have unsurprisingly been named among the research house’s top picks.

“We like companies in the consumer, banks, gaming and brewery sectors. The construction, telecommunication, utilities and property sectors could also flourish in a more stable political environment,” added the research house.

As noted in the Pakatan Harapan’s manifesto increase healthcare expenditure to more than 5% of total gross domestic product, they said: “This would be positive for pharmaceutical companies on the local bourse as well.”

Amid the broad-based optimism, CGS-CIMB Research has upgraded its year-end target for the FBM KLCI to 1,602 points from its previous target of 1,484 points.

“If the political instability concerns continue to ease over time, there is potential for the local bourse to touch its pre-GE14 in May 2018 level of 1,855 points,” it said.