KUCHING: Sarawak targets a revenue collection of more than RM11bil by next year, the highest ever.

Sarawak Premier Tan Sri Abang Johari Openg said about 48% or RM5.25bil of the projected tax revenue in 2023 will be derived from taxes, including RM4.2bil from the state sales tax.

The raw water royalty is projected to contribute RM550mil to state coffers, while RM287mil is expected to be collected from forest royalty, timber premium and tariffs and RM21mil from mining royalties, land rents and others, he added when presenting an expansionary 2023 state budget in the state assembly last week.

For non-tax revenue, Johari said the state government is expected to collect about RM5.5bil, with RM2.34bil from cash compensation in lieu of oil and gas (O&G), RM1.86bil from dividend income, RM650mil from interest income and RM400mil from land premium.

Others include RM120mil from cash compensation in lieu of import and excise duties on petroleum products and RM129mil from licences, service fees, permits, rentals and others. Federal grants and reimbursements are expected to be at RM265mil.

He said with total ordinary expenditure for next year projected at about RM10.8bil, this will enable the state to generate a surplus of RM238mil in 2023.

He said the 2023 state budget will continue to be development-oriented and rural focused, with RM7.51bil to fund development programmes, out of which RM4.54bil or 60% is for the development of rural areas.

The state economy is projected to register a growth of between 5% and 6% in 2023.

According to Johari, the state revenue for 2022 is now revised upward to about RM10.2bil from originally estimated RM10bil due to favourable prices of O&G and CPO. As at Oct 31, 2022, the state had collected nearly RM9.7bil or 95% of the revenue projection.

On the other hand, he said the 2022 ordinary expenditure has been revised upward to RM10.7bil from RM10.65bil projected earlier or an increase of RM60mil or 2.5%.

On development projects, Johari said the Sarawak Water Supply Grid Progressed for stressed areas financed via alternative funding will continued to be intensified, with an allocation of RM900mil in 2023 for several projects, including a 100 million litres mid-level and nine million litres upper-level reservoirs at Matang water treatment plant in the state capital.

Johari said the 2023 state budget was formulated by anchoring on five principles: “The first is we will develop a more robust, competitive and equitable economy; second, we will build Sarawak as a competitive and resilient state; and third, we will create a smart city underpinned by digital technologies, knowledge and innovation.

“The fourth is we will continue to foster a united, harmonious and caring society where our efforts would not leaving anyone behind; and lastly, we will continue to plan forward for fiscal sustainability to ensure future security for our children and grandchildren as well as generations to come after us.

“The state fiscal strategy continues our balanced approach by managing debt prudently, reducing the deficits caused by Covid-19 expenditure while rebuilding and revitalising the economy.”

Johari said the federal cabinet had agreed with Sarawak’s proposal to have representatives from Sarawak and Sabah in the Inland Revenue Board (IRB) of directors in line with the spirit of the Malaysia Agreement 1963.

“The representation is necessary and critical to ensure Sarawak receives its rightful share in tax revenue returned to the state.

“Therefore, we urge the new federal government to expedite the tabling of the amendment to the IRB of Malaysia Act 1995 (Act 533) in the Parliament to enable the representatives from Sarawak and Sabah to be included in the board of directors,” he said.

Meanwhile, Johari said Sarawak will be setting up a sovereign wealth fund, with an initial sum of RM8bil. He said the fund will enable the state to convert non-renewable assets to financial assets, invest for the future through forced savings and secure the continued growth of financial reserves through diversified investments.

“Ultimately, this will create an endowment to generate sustainable sources of income for future generations,” he added. The state assembly approved the Sarawak Sovereign Wealth Future Fund Board Bill last week.

According to him, the RM8bil for the wealth fund would come from the state consolidated fund, followed by annual appropriations of RM300mil in the second to fifth years, RM550mil in the sixth to 10th year and RM650mil in the 11th to 12th years. 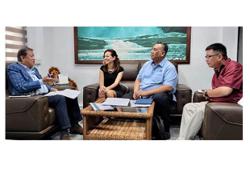