AT the time of writing, the Bloomberg Commodity Index (BCOM), which tracks 23 exchange-traded contracts on physical commodities, was last observed at US$111.72 (RM496.85).

Although still up 12.7% year-to-date and not in a bear market just yet, selected commodities are well off the peaks, as we have seen among several industrial metals, energy, agriculture produce like grains and other soft commodities, which are down by between 15% and 58% from their recent peaks.

What does this mean to investors as the global economy grapples with recession fear at a time when central banks are ultra-hawkish and determined to bring the inflation rate down by merely raising interest rates?

First of all, we can all agree that other than several central banks that were seen to be ahead of the curve in terms of raising interest rates from record lows or taking preemptive measures against rising inflationary pressure, especially the Bank of Korea (BoK) with a rate hike in August last year and the Monetary Authority of Singapore’s (MAS) move to raise slightly the slope of the Singapore dollar nominal effective exchange rate (S$NEER) policy band in October last year, the Federal Reserve (Fed) missed the boat. 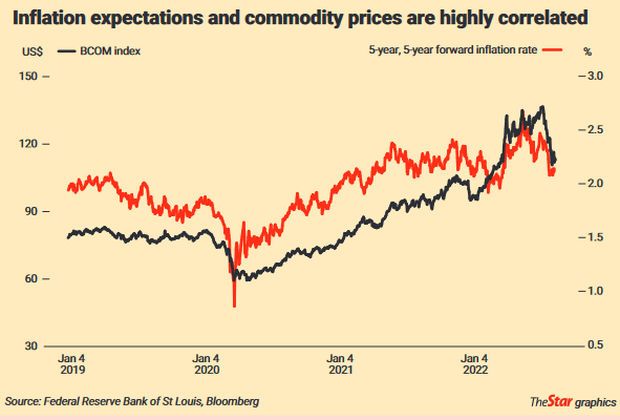 The Fed wrongly interpreted the inflation prints that it was seeing, even as early as April 2021 when the core personal consumption expenditure (PCE), which is the Fed’s favourite inflation gauge, jumped to 3.1% from 2% in the preceding month.

Since then, the core PCE was only going up north and hit a high of 5.3% in February. However, the core PCE has eased since then and in May, the pace of increase has been slower and was last seen at 4.7% year-on-year growth.

Judging by the Fed’s guidance of 4.3% for the year, core PCE would have to average just under 3.8% over the next seven months to achieve the Fed’s full-year target.

While the Fed has raised some 150 basis points (bps) since its first lift-off, and the market is still expecting the Fed to continue to be aggressive over the next four remaining meetings, the headline June consumer price index of 9.1% – which was the highest in 41 years – and the core inflation print of 5.9% had even increased the bets of a full 100 bps hike by the Fed.

The past week has also been busy for many central bankers as the Bank of Canada took out the bazooka with a 100 bps hike while the Philippine central bank raised its benchmark interest rates by 75 bps unexpectedly.

Both the Royal Bank of New Zealand and the BoK triggered a 50 bps move each while the MAS re-centered the midpoint of the S$NEER policy band up to its prevailing level, but no changes were made as to the slope and width of the band.

The European Central Bank (ECB) and the Bank of Japan (BoJ) remain the only central banks among major developed markets that have yet to raise their respective benchmark rates, although it is likely that the ECB will do so this month.

Closer to home, both the Bank of Thailand and Bank Indonesia are the two South-East Asian nations that have yet to raise rates.

China, on the other hand, has cut both its one-year and five-year loan prime rate as the country has not felt any inflationary pressure due to the slower domestic economic momentum brought about by periodic lockdowns in some key cities.

The second quarter year-on-year gross domestic product growth of just 0.4%, a third of what the market was expecting, may even prompt the People’s Bank of China to cut rates even more.

Hence, similar to the Fed, the ECB is seen behind the curve while in the case of the BoJ, there is no real pressure to raise rates either as Japan is not facing inflationary pressure but in fact, is faced with a weak economy, and hence the low benchmark target rate of minus 0.1% has been maintained for the longest time.

But this has hurt the yen, which dropped to close to a quarter-century low of 138.90 to the US dollar at the time of writing, as the higher yield on US treasuries has prompted investors to seek better alternatives.

Secondly, although the US headline inflation has hit a fresh 41-year high in June, inflation is seen peaking; judging by the lower core PCE prints over the past three months, the recent decline in commodity prices from their multi-year peaks will surely bring the PCE or inflation readings globally lower in the coming months.

This expectation has now been built into the five-year, five-year forward inflation rate (T5YIFR) as seen in the chart.

The chart is a reflection of what the market thinks the inflation rate will average over the next five years in five years.

Interestingly, the drop in the T5YIFR corresponds very well with the drop in commodity prices as well with a relatively high correlation coefficient of 0.83.

Rate hike bets will come off

At the moment, based on the Fed Fund Futures probability, the market is looking at a 57% probability of a 75 bps hike later this month, followed by another 75 bps hike in September and a 25 bps hike each in November 2022 and December 2022 meetings of the Federal Open Market Committee, which will bring the benchmark Fed Fund Rate to 3.50% to 3.75% by the end of the year.

Interestingly, the market has also priced in expectations that the Fed will start cutting rates in 2023, with the first 25 bps cut in March next year, followed by another 25 bps cut in May 2023.

While these forecast probabilities remain fluid and will change depending on economic data points, it is likely that the hawkish tone that we are seeing among consensus may not have taken into consideration the fact that the recent commodity price weakness has already altered inflation expectations going forward by more than 50 bps.

In essence, this may also mean that the Fed or other central banks for that matter will not be as aggressive as it is made out to be at present, but may still communicate a hawkish tone due to the nature of inflation prints that are being released now, which are the June data for both the headline and core inflation prints.

It is likely that by August when the July data are released, the pressure will be less as the lower commodity prices will lead to lower input costs as well as a reduction in price for end products.

A weaker dollar ahead

In conclusion, we have seen the peak in current inflation prints, and from hereon, it will be less of a concern. With that, the pressure to raise rates will be reduced and the first clear sign will be when major central banks stand pat from raising rates any further.

For an immediate signal, investors should pay attention to not only the above two indicators (the T5YIFR and BCOM) but also the Dollar Index (DXY) as that index, which is up 13.6% year-to-date, may have peaked.

The euro, yen, yuan and ringgit, to a certain extent, are set to appreciate against the mighty dollar soon.

Pankaj C. Kumar is a long-time investment analyst. The views expressed here are the writer’s own.