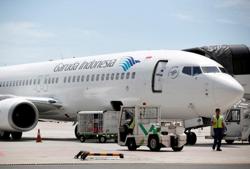 JAKARTA: Creditors of PT Garuda Indonesia looking to recoup money in the airline’s US$9.8bil (RM41.06bil) debt restructuring must submit their bids by yesterday.

The deadline of 5pm Jakarta time (10am in London) for filing claims will be the first in a series of milestones and months of wrangling that could stretch into September.

The airline is seeking to cut liabilities to US$3.7bil (RM15bil) and renegotiate leasing terms or return planes to aircraft lessors with the smallest penalties possible.

“The government is committed to treat all creditors, foreign and domestic, fairly with the ultimate goal of saving Garuda,” Kartika Wirjoatmodjo, a deputy minister at Indonesia’s State-Owned Enterprises Ministry told Bloomberg News this week.

Already struggling to stay profitable even before the pandemic brought travel to a standstill, Indonesia’s flag carrier wants investors to take a haircut for their debt.

That’s a lower recovery rate than what some regional peers offered, according to Shukor Yusof, founder of aviation consulting firm Endau Analytics.

The indicated price of Garuda’s global sukuk recently fell to record lows, according to prices compiled by Bloomberg.

But there’s more at stake than financial returns. The 71-year-old airline is a major employer and a vital mode of transport for the country made up of 17,000 islands over an area spanning the distance from New York to London. Indonesia’s government is a majority shareholder, so parliament needs to approve big corporate changes.

The airline’s fate has already stirred up heated debate in the legislature.

The impact of corruption in the procurement of aircraft and engines, aggressive fleet expansion and high costs have contributed to annual net losses since 2017.

Once creditors’ bids are submitted, the focus shifts to Jan 19, when a court-appointed auditor will issue a verdict on whether the claims can go ahead.

Indonesian law provides for a 270-day limit on the restructuring process, meaning that date could well get postponed.

Indonesia’s flag carrier is one of many to take a beating due to the pandemic and seek legal relief.

Philippine Airlines Inc will be able to tap US$150mil (RM628mil) in additional financing and cut debt by US$2bil (RM8.2bil) after having won the United States court approval for its reorganisation.

For Garuda, the legal process is key because negotiating individually with a large number of mostly overseas creditors and lessors would take too long.

It faces the risk of losing business should global airline traffic recover unless it can reach an agreement with lessors, from which it secures the majority of its fleet. — Bloomberg