But resurgence of new variant still a key concern

(MAHB) is expected to further improve over the coming months with the increase in interstate travel within Malaysia and the introduction of safe international travel.

However, the resurgence of Covid-19 cases due to the new variant remains a key concern.

The stock is seen as a good proxy to air travel and tourism, given its dominance in the airport segment locally, and its significant market share in Turkey.

Given its strategic position in the economy, AmInvestment Research believes it warrants stronger support from various stakeholders that should help it tide through the pandemic and the current downturn in the air travel market.

Kenanga Research said the expanding availability of vaccines has renewed optimism for air travel to return to normal sooner-than-expected, and it expects air travel to improve at a gradual pace beginning end-2021.

For the nine months ended Sept 30, 2021, the airport operator reported core net losses of RM657.3mil, which was below MIDF Research’s expectation.

It said the deviation was due to weaker-than-expected rebound in passenger traffic for the quarter.

Led by that, the research house revised its loss estimate for the full year of 2021 from RM565.6mil to RM885.8mil but kept its forward projections intact. Consensus’ full-year net loss expectation for the company is at RM863mil.

To ensure its earnings remain intact, MAHB has put in place multiple initiatives to reconnect the air traffic at its airports as the pandemic has largely moved into an endemic phase.

AmInvestment said some of the initiatives include the network reconnecting programme, which has seen 36 airlines resume operations in Malaysia, and another 27 airlines expected to resume by the end of this year.

MAHB is also pursuing 22 new city pairs under the airline incentives programme as an effort to expand the air traffic network coverage for its airports, it said.

However, TA Research said a shock wave from Omicron has slashed MAHB’s share price by 8.4% over the last two trading days.

It believes the market has started pricing in another possible lockdown if the Omicron outbreak gets out of hand.

But it reiterates its “buy” call on MAHB with unchanged free cashflow-to-equity valuation of RM7.49 a share.

MIDF also has a “buy’’ call and maintained its target price at RM6.70 a share.

AmInvestment, meanwhile, has a “hold’’ call at RM6.57 a share while Kenanga has an “outperform’’ call and a target price of RM7 a share. 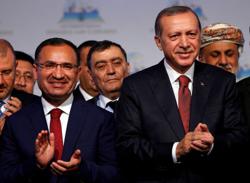