Bullish outlook: People shop for decorative items ahead of Diwali in Mumbai. Businesses are expecting sales during the festival will pick up to levels seen before the pandemic struck early last year. — AFP

NEW DELHI: Some of India’s top lenders and shadow finance companies are helping fuel demand among consumers wanting to splurge on everything from clothes to two-wheelers and homes, offering hopes of a consumption-driven recovery in Asia’s third-largest economy.

Businesses are expecting sales during Diwali – the Hindu festival of lights – will pick up to levels seen before the pandemic struck early last year.

That is in part because financiers, sitting on a huge pile of excess cash, are eager to lend with outstanding consumer durable loans already at its highest since March 2020.

HDFC Bank’s retail loans surged 12.9% in the three months ended September from a year earlier, the lender’s first double-digit growth in such loans since the onslaught of the pandemic.

“We expect economic activity to recover further, driven by festive season, pick up in vaccination and the likely increase in government spending,” Srinivasan Vaidyanathan, chief financial officer at HDFC Bank said at a recent earnings call.

Spending by the government on better health services, roads and infrastructure is crucial as it lifts growth and incomes, economists said.

Vaidyanathan added that loans to the retail sector were going up. For the country’s largest private lender that’s a shift in strategy after it had pulled back on retail lending last year.

“Interest rates are low, banks are keen to lend during Diwali and the winter season is great for biking. I got my loan approved in just 24 hours,” he said over the phone.

Indian lenders have used the pandemic to shore up their capital base, which is now allowing them to increase lending, especially to the household sector.

Private-sector banks which have been at the forefront of stepping up consumer loans, raised 536 billion rupees of equity money in the last financial year while their state-run peers raised 120 billion rupees in capital.

“Growth is looking better at this time across a wider set of segments, recoveries are in control,” said Dipak Gupta, joint managing director at Kotak Mahindra Bank Ltd.

“All of that gives a comforting feeling to take the foot off the brake and start moving it to the accelerator.” — Bloomberg 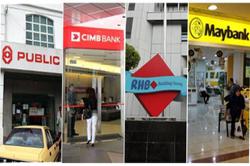