KUALA LUMPUR: The decline on Bursa Malaysia accelerated as it approached midday with the benchmark index slipping below the 200-day simple moving average.

At 12.30pm, the FBM KLCI was down 11.46 points to 1,571.62 as global corporate earnings reflected supply chain disruptions that could slow the economic recovery.

With Bursa investors already staying on the sidelines one day ahead of the tabling of Budget 2022, the retreat in regional markets hastened a correction phase on Bursa Malaysia.

Amid a broad-based retreat, Press Metal

On the broader market, Dataprep surged 12.5 sen to 97.5 sen with 48.43 million shares traded, the second-highest volume on Bursa Malaysia.

Kanger, down one sen to 4.5 sen, topped the most active list with 396.05 million shares traded.

Rounding out the top three was Ireka, which rose 3.5 sen to 69 sen with 37 million shares exchanging hands. 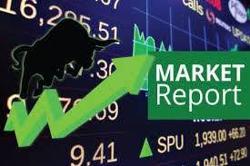