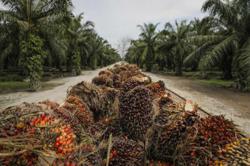 India, which imports palm oil mainly from Malaysia and Indonesia, could buy 500, 000 tonnes of additional palm oil in these three months and average monthly imports could be around 850, 000 tonnes, Sandeep Bajoria, chief executive of Sunvin Group, a vegetable oil broker, said. (File pic shows harvesting at a Felda plantation.)

KUALA LUMPUR: The world production of four vegetable oils, namely palm oil, sunflower oil, soybean oil and rapeseed oil, is expected to increase by about seven million tonnes for the 2021/2022 period, the biggest growth in four years, according to Oil World.

"If these forecasts materialise, vegetable oil prices are set to decline and meal price will become relatively stronger during the year,” he said in a slide presentation during Malaysian Palm Oil Council (MPOC) Pointers on Price Trends online seminar today.

"In Malaysia, the average palm oil yield is likely to fall to a 20-year low in 2021 and total production to only 18.2 million tonnes or even less, despite generally favourable weather.

"Overall, for this year, Malaysian palm oil production will turn out about four million tonnes below potential due to, among others, shortage of labour. However, the situation is likely to improve next year with 32,000 foreign workers allowed to enter the country,” he said.

The downtrend in palm oil production has resulted in the crop enjoying new record-high prices, in line with the performance of other vegetable prices.

Recently, Minister of Plantation Industries and Commodities Datuk Zuraida Kamaruddin said the government has approved 32,000 foreign plantation workers who have completed their COVID-19 vaccination to be brought into Malaysia in stages starting mid-October.

He also said that India's duty changes affected the entry of palm oil from Malaysia and Indonesia into the world's biggest palm oil consumer market in 2020.

As at January to September this year, India emerged as Malaysia’s biggest export destination for palm oil at 22.15 per cent, followed by China (11.38 per cent), the Netherlands (6.40 per cent) and Turkey (4.37 per cent).