BERLIN: German chipmaker Infineon Technologies said on Tuesday it was battling extreme tightness in its markets as the latest wave of the COVID-19 pandemic disrupts production in Asia and inventories hit all-time lows.

Results for the fiscal third quarter at the leading supplier of chips to the automotive industry reflected those strains, with quarterly revenue growth of 1% lagging analyst expectations even as profit margins widened.

"Demand for semiconductors is unbroken," Chief Executive Reinhard Ploss said. "Currently, however, the market is faced with an extremely tight supply situation."

Third-quarter revenue of 2.72 billion euros ($3.2 billion) was below the consensus of 2.77 billion euros in a poll of analysts by Vara Research. Profit margin widened to 18.2% from 17.4% in the prior quarter, beating a consensus view of 18%.

Under those circumstances, any government-imposed lockdowns - such as one in Malaysia where Infineon has a production site - were especially grave, Ploss added.

"We are doing our utmost to improve matters along the entire value chain and are working as flexibly as possible in the best interests of our customers," said Ploss. "At the same time, we are continuously building up additional capacity."

Infineon will be able to raise output of specialist power-management chips with the commissioning of its new plant in Villach, Austria, but it still relies heavily on Asian contract manufacturers that are running flat out.

"This is leading to production stoppages," said Ifo's Oliver Falck. "The shortages of semiconductors will persist for some time to come."

In addition to the pandemic hit to production at its site in Melaka, Malaysia, Infineon said it was still dealing with the aftermath of a winter storm that crippled its chip fabrication plant in Austin, Texas.

Those problems caused sequential revenue declines in the third quarter both at its mainstay automotive unit - which accounts for around two-fifths of group revenue - and at its power and sensor systems division.

Infineon said it expected revenue of 2.9 billion euros in the fourth quarter, with its automotive and power systems expected to show flat sales, and a segment result margin of 19%. - Reuters 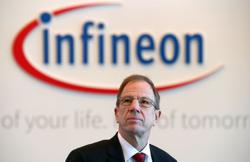