Asia-Pacific countries, particularly, ramped up lockdown measures to slow the spread. This in turn caused investors to take flight to safety, and as a result, benefited safe-haven currencies such as the dollar and yen.

THE Covid-19 jitters took a turn for the worse across the globe, as many countries started reporting a surge in daily new cases due to the super spreader Delta variant.

Asia-Pacific countries, particularly, ramped up lockdown measures to slow the spread. This in turn caused investors to take flight to safety, and as a result, benefited safe-haven currencies such as the dollar and yen. Meanwhile, low beta currencies underperformed.

The dollar index appreciated by 0.54% to 92.624, almost reaching its three-month high propelled by the higher demand for United States Treasury papers. Nonetheless, all eyes were on Federal Reserve (Fed) chair Jerome Powell’s testimony before the Senate Banking Committee.

The overall statement was dovish-tilted as the Fed intends to keep the ultra-easy policy to help reach communities that have been hardest hit by the pandemic.

Although Powell indicated his discomfort over the recent surge in inflation, sitting well above the Fed’s 2.0% target, he reiterated that inflation would prove to be transitory.

He also stated that the labour market is “ways off” from recovery, signalling monetary withdrawal discussion is still premature.

On the data front, June US inflation rate hit its highest since August 2008 at 5.4% year-on-year (y-o-y), beating the 4.9% forecast. Excluding food and energy prices, the core inflation also increased 4.5% y-o-y, well above market consensus of 4.0%.

Tracking the dollar movement, the euro ended the week weaker by 0.54% at 1.18 albeit briefly touching a three-month low of 1.178 levels.

In addition, the euro took some beating post-European Central Bank (ECB) Lagarde’s remarks, citing the ECB will not repeat its past mistake of tightening policy too early.

On the pandemic development, several countries including Spain, France and the Netherlands had renewed their restrictions to curb the spreading Delta variant infections.

Similarly, the United Kingdom pound depreciated by 0.52% to 1.38 due to the UK’s forceful government plan to ease restrictions soon. The plan is to generally “live with Covid”, scrapping restrictions and making face masks voluntary, despite new daily Covid cases reaching 30,000.

Among local data, the recovery progress in the UK is still decent. The UK’s gross domestic product (GDP) during May grew at 24.6% y-o-y and rose by 0.8% month-on-month (m-o-m) while the three-month GDP average ended May jumped to 3.6%, albeit below consensus’ 3.9%.

Headline inflation in June increased 2.5% on a yearly basis, above the forecast of 2.2% and actual 2.1% y-o-y in May. Core inflation rate also outperformed the consensus at 2.3% y-o-y vs 2% y-o-y. The number of people claiming unemployment benefits in June declined by 114,800, recording the biggest drop in history.

The Japanese yen strengthened by 0.28% to 109.8, benefiting from safe-haven flows. Nonetheless, all eyes were on the Bank of Japan (BoJ) monetary policy meeting. Although the BoJ kept its policy rate status quo at -0.10%, it downwardly revised its GDP growth forecast to 3.8% in the fiscal year ending March 2022 from 4.0% previously.

But it revised the next fiscal year GDP growth upwards to 2.7% from 2.4% in anticipation that consumption will pick up as vaccinations accelerate.

Meanwhile, the baht came in as the underperformer, down 0.34% to 32.68 as the country grapples with surging Covid-19 cases.

The ringgit weakened to an 11-month low, down 0.26% to 4.191 due to renewed domestic challenges as Malaysia recorded new highs of Covid-19 cases. However, market players were cheered by the daily vaccination rate that stayed above 400,000 for four consecutive days.

The US Treasury curve bull-flattened with the front end falling zero to two basis points (bps), while the back end slipped six to eight bps. The closely watched UST 10-year note eased 6.6bps to 1.30%, hitting its lowest level in five months.

The sustained buying flows reflected investors’ growing concerns over the spike in the highly contagious Delta variant as well as the dovish tilted Powell’s testimony to the Congress.

The local bond market started the week on a softer note after Finance Minister Tengku Datuk Seri Zafrul Abdul Aziz said that the nation’s fiscal deficit will probably widen to 6.5% to 7% of GDP versus the previous forecast of 6%, and proposed raising the debt ceiling to 65% from 60% currently.

By the end of the week, the Malaysian Government Securities (MGS) curve steepened with the front to belly part of the curve falling one to two bps while the back end rose two to three bps.

Nonetheless, the focus was on the 15-year Government Investment Issues auction with an issue size of RM4.5bil, inclusive of RM2bil private placement. The auction gathered strong reception with the bid to cover recording 3.06 times while the yield traded in a tight range of only 2.3bps ranging from 3.969%–3.992%.

Globally, investors cheered strong earnings from US banks, while sidestepping a steep 5.4% y-o-y jump in the US June 2021 consumer price index or CPI.

They reacted mildly to the Fed chair’s testimony before the Congress. While sticking to his view that the recent surge in inflation was transitory, Powell acknowledged that it had risen to ”uncomfortably high levels”.

Foreign investors unloaded RM79.5mil worth of Malaysian equities during the week, pushing the year-to-date net outflow to RM4.7bil.

Meanwhile, foreign investors piled into Malaysia Government Securities for the 14th straight month with a net inflow of RM0.4bil in June 2021 (vs RM2.4bil in May 2021).

Equity trading activities subsided with an average daily value traded (ADVT) of RM3.1bil in July (vs RM3.3bil in June). Similarly, turnover velocity dwindled to 44.2% in July (vs 46.0% in June).

During the week, six out of 13 sectors on Bursa Malaysia ended in the positive territory.

The best performing sector was healthcare (+5.8%) on a rebound in glove stocks.

The worst performing sector was plantation (-2.0%), weighed down by the environmental, social and governance concerns of a key planter. 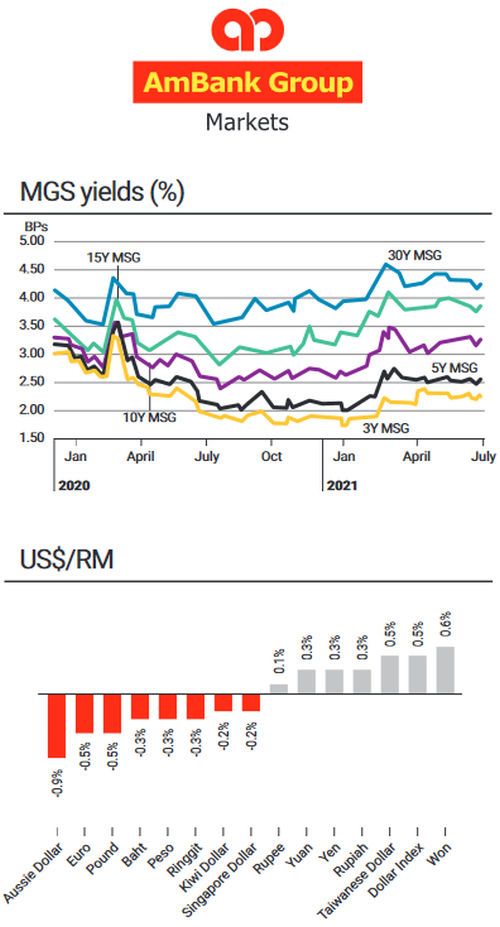