’s weaker performance in the first quarter ended March 31, 2021 was due to RM65mil losses suffered from the processing of external crops in contrast with the profit of RM48mil a year ago, a research house said.

CGS-CIMB Equities Research said the RM65mil losses were due to FGV's inability to fully hedge its crude palm oil (CPO) production from the mills. The processing of external crops formed 70% of the total fresh fruit bunces (FFB) processed.

“FGV indicated that in 1Q21, its FFB purchase price for third-party fruits was based on an average CPO price of RM4,213 per tonne, while the average selling price (ASP) achieved for the CPO sold was only RM3,853 per tonne, causing the group to book a negative milling margin of RM128 per tonne from processing external crops, ” it said.

Although 1Q21 core net profit formed only 2% of CGS-CIMB Research and 1% of consensus full-year forecasts, the research house deemed it in line as higher CPO price achieved for its upstream division could offset the weaker milling contribution in subsequent quarters.

The plantation group reported a net loss of RM35m in 1Q21 due to negative fair value changes in the LLA of RM144m as the group raised the CPO price assumptions for 2021 when determining the LLA fair value.

“The better year-on-year performance was due mainly to higher average CPO price achieved (+18% year-on-year to RM3,172 per tonne) for its plantation operations.

CGS-CIMB Research said during an analysts briefing, FGV reduced its guidance for 2021F FFB output growth to 2%-4% from 3%-5% to reflect worker shortages and impact from MCO 3.0.

“FGV said its workforce currently stands at 75% of total requirement, a drop from 83% as at end-4Q20 and 90% as at end-3Q20, which could affect its productivity. Reiterate Hold with unchanged TP of RM1.30 We maintain our earnings forecasts.

“We also retain our hold rating and TP of RM1.30 for FGV, based on the previous mandatory takeover offer price from Federal Land Development Authority (Felda).

“The odds of delisting remain high as Felda has stated it does not intend to maintain the listing status of FGV. Share price could be supported by potential privatisation offer and 3% yield, ” it said. 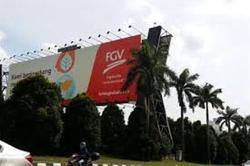