Taiwan’s once blistering economy is battered

TAIPEI: Taiwan is facing major threats from a surge in coronavirus cases and drought-triggered power outages, potentially derailing one of Asia’s economic success stories this year.

The island has gone from zero local cases earlier this month to recording 1,226 domestic infections in the past five days alone, and stocks fell yesterday after a soft lockdown was extended to the entire island.

Schools were already closed, but the new rules mean masks are mandatory outdoors, with limits on social gatherings and the closure of many public facilities.

If cases remain high, Taiwan may be forced into a full lockdown, which would spread the pain from the retail sector to exports in an economy heavily reliant on trade.

On top of that, a drought has left hydroelectric plants operating at limited capacity, contributing to power outages in major cities across the island, including locations where the world’s biggest computer chip businesses operate.

“The economy will be hit now and in the near future, there will be scars from Covid on economic growth, ” said Iris Pang, chief economist for Greater China at ING Bank NV.

The power shortages mean “even a short blackout slows down the production line. So the chip shortage will be under even more pressure.”

Pang sees a downgrade in economic growth this year depending on how long a lockdown lasts. Gross domestic product (GDP) rose at a blistering pace of 8.16% in the first quarter, underpinned by factory output and surging export growth, with the government predicting a full-year expansion of 4.64%.

The hit to GDP growth from the latest virus curbs could be as low as 0.16 percentage points if the outbreak ends by June 30 or as high as 0.53 points if it extends into the third quarter, National Development Council Minister Kung Ming-hsin said at a briefing in Taipei Tuesday.

Power shortages are another complication. The drought has left hydroelectric plants operating at limited capacity. A dual coal- and gas-fired plant went offline last Thursday due to a technical error, and consumers across the island on Monday got mobile phone alerts ahead of yet another round of rolling blackouts.

There’s unlikely to be any let-up in the drought: traditional “plum rains” in May and June will likely bring less precipitation than in previous years, Economics Affairs Minister Wang Mei-hua warned in a video Tuesday, urging the public to limit their electricity and water use.

The main reason for the repeated blackouts over the past week has been surging electricity use as factories run non-stop around the clock to keep up with overseas demand, Wang said.

“The water shortage is unprecedented: that means it is difficult to predict the effect, ” said Sam Chang, a bond trader at Hua Nan Securities Ltd. “While there is not much talk on this issue on the trading floors so far, it will definitely trigger the panic on the local bond markets.”

Stocks have taken the biggest knock so far, with the TWSE Index down more than 8% this month despite a 5% rebound Tuesday, which was driven by gains in chipmakers. The Taiwan Stock Exchange Weighted Index fell as much as 0.7% in early trade, while the local dollar was little changed.

Taiwan is the world’s main supplier of advanced computer chips, with the island hosting the highest-end facilities of industry linchpins Taiwan Semiconductor Manufacturing Co and ASE Technology Holding Co – a key supplier to an auto industry already struggling with shortages.

While retail and consumption will bear the brunt of the latest virus curbs, exports and industrial production are expected to sustain double-digit growth in the second quarter, according to DBS Group Holdings Ltd economist Ma Tieying.

Semiconductor production is largely automated and factory disruption could be limited, she said. DBS is maintaining its full-year GDP growth forecast of 5%.

Still, manufacturers have to deal with virus-related supply chain issues, including for high-value exports shipped by plane. China Airlines Ltd this month said its airfreight capacity will be cut by 10% as a result of new Covid-related rules, imposed after its pilots were linked to the rapidly growing outbreak.

The resurgence in virus cases increases the likelihood of more government support. Taiwan’s cabinet said last week it will increase the Covid-19 relief spending cap to US$22.6bil (RM93.60bil). DBS’s Ma said there’s sufficient room for fiscal policy to be expanded, though limited scope for monetary easing from the central bank.

Authorities are racing to contain the outbreak, hoping they can duplicate last year’s success in restricting its spread and the total death toll, which now stands at 14. ─ Bloomberg 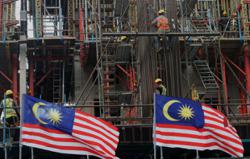 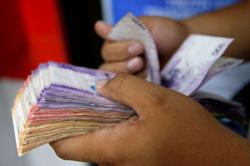