would see another shake-up in its top management in less than four months.

Sources said Boustead CEO Datuk Seri Mohammed Shazalli Ramly would take over the role as the CEO of LTAT, succeeding Datuk Seri Amrin Awaluddin who has left to join Lembaga Tabung Haji as group MD and CEO effective May 6.

LTAT in a statement yesterday announced the resignation of Amrin, effective May 1.

Shazalli was appointed the CEO of Boustead in December last year.

and Celcom Axiata Bhd, was one of the shortlisted candidates vying with Amrin for the LTAT CEO position last year. In addition, a source said that the current deputy CEO of Boustead, Izaddeen Daud, would likely be reassigned as the CEO of the diversified conglomerate.

In a statement yesterday, TH said: “Minister in the Prime Minister’s Department (Religious Affairs) Datuk Dr Zulkifli Mohamad Al-Bakri has agreed with the appointment of Amrin as the new group MD and CEO.”

Amrin is currently the CEO of LTAT, a position he took over in January this year from Nik Amlizan, who had on Nov 2 last year assumed the position of CEO of Kumpulan Wang Persaraan (KWAP). Prior to LTAT, Amrin was the CEO of Boustead.

Amrin has more than 30 years of experience in the corporate sector and began his career in banking before holding several senior positions in companies such as Renong Bhd, Malaysian Resources Corp Bhd and Putera Capital Bhd. He also served as the CEO of NTV7, Sistem Televisyen Malaysia Bhd, Media Prima Bhd

TH currently has about nine million depositors with a total fund of almost RM80bil. Md Nor also expressed his deep appreciation and gratitude to Nik Mohd Hasyudeen for his commitment and effort in furthering TH as an Islamic institution respected for its performance and governance.

It was said that Amrin’s first task in LTAT was to overlook the privatisation of Boustead, which has land bank, investment properties and hotels, among others in its books. However, in February, LTAT shelved the privatisation plan.

The exercise was first announced in May last year when LTAT said its intention to privatise Boustead at an indicative offer price of 80 sen per share was as part of its portfolio rebalancing. The deal valued Boustead at RM1.62bil.

However, Boustead has been facing losses for years and currently suffers from a high debt of RM7.5bil. It has been selling its assets since last year to help shore up its balance sheet and pare down debt.

and Maybank Investment Bank Bhd. He is also currently the executive director of Symphony House Sdn Bhd, a position he has held from 2003. 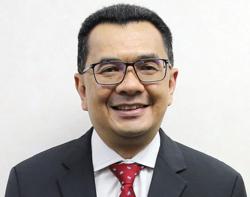