United Airlines said it expects fuel costs to rise by another 5% in the second quarter.

NEW YORK: United Airlines on Monday reported a bigger-than-expected $2.4 billion adjusted net loss for the first quarter, as fuel costs rose and the airline operated fewer flights amid continued weak demand due to the COVID-19 pandemic.

Average fuel cost climbed nearly 30% to $1.74 per gallon in the quarter from the previous three months, while passenger traffic fell 52% compared to the same period in 2020. The World Health Organization did not declare COVID-19 a pandemic until near the end of the first quarter in 2020.

United Airlines said it expects fuel costs to rise by another 5% in the second quarter.

The airline, however, forecast a return to profitability later this year and said it expects to restore some capacity cuts as more people are willing to travel.

United's adjusted net loss was about $2.40 billion for the first quarter, compared with analysts' average estimate for a loss of about $2.23 billion, according to IBES data from Refinitiv.

Rival Delta Air too had pointed to higher fuel costs in part for its quarterly loss and pinned its hope on profitability later in 2021 as rapid COVID-19 vaccinations are expected to boost air travel.

United said earlier on Monday that it was adding three flights to Croatia, Greece and Iceland, which are among countries reopening for vaccinated travelers.

The Chicago-based carrier expects its adjusted earnings before interest, taxes, depreciation and amortization to turn positive later this year even if business and long-haul international demand remains 70% below 2019 levels.

United forecast its second-quarter total unit revenue, which compares sales to flight capacity, to fall 20% compared with the same period in 2019. That would be less than the 27% drop in the first quarter.

The company expects core cash flow to remain positive for the rest of 2021 after it turned positive in March. 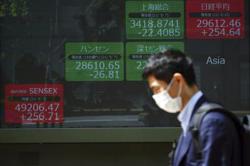