FDIs – more than meets the eye

According to statistics compiled by Bank Negara, Malaysia received RM139.9bil in total gross FDI inflow in 2020 and this was a marginal increase of 0.8% y-o-y against the 2019 inflow of RM138.8bil.

WHAT is Malaysia’s actual foreign direct investments or FDIs? Well, that depends on who you ask and what information are you looking for.

If it is in relation to approved FDIs, the answer comes from Malaysia Investment Development Authority (Mida). If one is referring to gross FDI, the answer is given by Department of Statistics and if you want to know what is the net FDI, the answer lies in Bank Negara’s statistics.

Of course, the other report that took most of us by surprise is the report by United Nations Conference on Trade and Development (UNCTAD) which it’s “Investment Trend Monitor” in late January said that Malaysia’s FDI plunged by more than two-third to just US$2.5bil (RM10.25) for 2020.

How truthful is this assessment and is there merit for that argument that we have fallen out of favour from the international investment community, especially in relation to FDIs? Let’s look at the facts.

Mida had recently released the Malaysian Investment Performance Report which details out how well Malaysia has actually done in attracting new capital investments, both from domestic source as well as foreign. In the report dated March 2, Mida announced Malaysia recorded a total of RM164bil approved investments in the manufacturing, services and primary sectors last year. 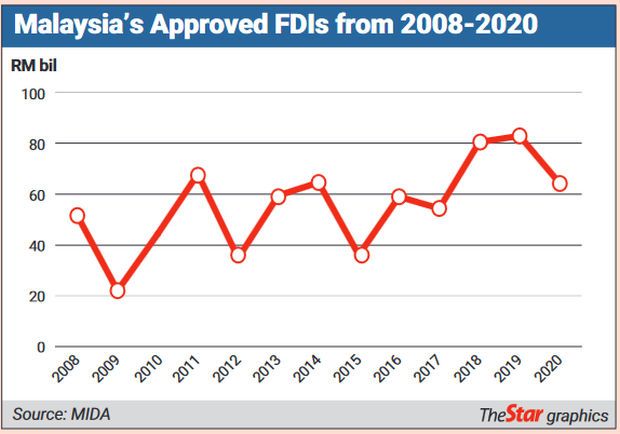 Mida further added that these investments involved 4,599 projects and are expected to create 114,673 job opportunities in Malaysia.

Out of the total RM164bil, FDIs totalled some RM64.2bil, representing 39.1% of the total approvals. Malaysia’s top FDI investors are from China with about RM18.1bil approved investments, followed by Singapore with RM10bil and the Netherlands with RM7bil. In terms of industries, 55.6% of the RM164bil total approved investments were for the manufacturing sector, 40.7% for the services sector, and the primary sector received the balance 3.7%. For the manufacturing sector itself, 62% of the approved investments were FDIs but for the services sector, that figure dropped to just under 10%. Chart 1 summarises Mida’s FDI flows between 2008-2020.

According to statistics compiled by Bank Negara, Malaysia received RM139.9bil in total gross FDI inflow in 2020 and this was a marginal increase of 0.8% y-o-y against the 2019 inflow of RM138.8bil.

In fact, Malaysia’s flow of FDIs have been rather consistent over the past 10 years as seen on chart 2, where gross FDIs grew from RM92.7bil in 2010 to last year’s RM139.9bil, a compounded annual growth rate (CAGR) of about 4.2% per annum over a 10-year period.

However, in the last three years, this ratio dipped marginally to between 9.2% and 9.9%.

While we have seen the healthy growth in FDIs, we have at the same time experienced outflows from investments that has previously been made in the country.

These outflows are in the form of liquidation of investment, loan transactions, trade credits or other capital payments. Compared with 10 years ago, these outflows have doubled from just RM63.5bil in 2010 to as much as RM126bil last year and effectively growing at a CAGR of 7.1% per annum over the 10-year period. 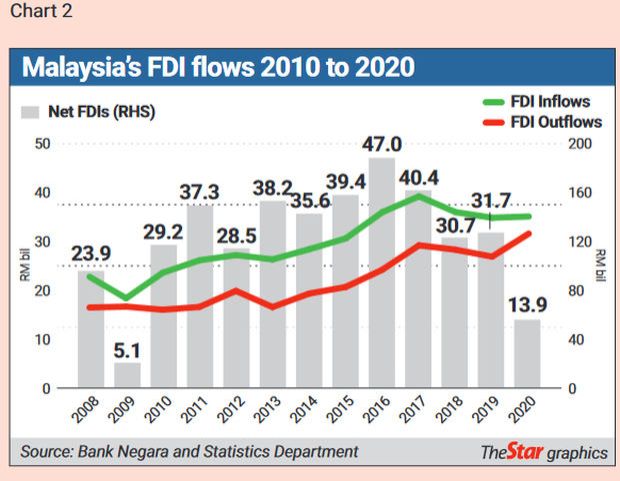 Thus, while we are able to attract FDIs as seen from the data, our real issue is how are we to convince these investors from not repatriating back cash proceeds from their business operations, whether in the form of dividends, capital or loan repayments. Perhaps we should encourage them to reinvest and expand their businesses here and at the same time, if they are borrowing to finance their initial investment, they should be encouraged to borrow locally. According to Mida, Malaysia’s lower net FDI inflows is partly due to higher inter-company borrowings of these multinational companies.

Another interesting point is the gap that exist between the data that Mida’s releases for approved FDIs, which covers the manufacturing, services and primary sectors, and Bank Negara’s data for actual FDIs, which covers the agriculture, mining (including oil and gas), manufacturing, construction and services sectors. So while the gap can be explained by the wider coverage of sectors but the differential due to the coverage is not significant. It does seem that Bank Negara or DoSM’s data is more comprehensive in capturing the actual and realised FDIs while Mida’s data is more about approved investments only.

Hence, there is more than meets the eyes when we see a report on FDIs into Malaysia. One needs to see whether this is in fact in relation to approved investments, realized investments or net FDIs, which of course takes into account outflows. The UNCTAD report that cited a drop in Malaysia’s FDIs is clearly misconstrued as even on a net basis, at RM13.9bil, Malaysia’s net FDIs were higher than the US$2.5bil FDI figure cited by that report.

In the World Investment Report by UNCTAD released in June 2020 and for the year 2019, it shows that Asean as a whole received some US$155.8bil in FDI inflows and at the same time experienced an outflow of US$56bil, giving rise to a net FDI inflow of US$99.8bil. Malaysia was recorded in that report as having received some US$7.65bil in inflows and had an outflow of US$6.30bil, leaving us with a net inflow of just US$1.35bil.

In actual fact, if one were to take Bank Negara’s data, Malaysia’s FDI inflow for 2019 was RM138.8bil or US$33.8bil while outflows stood at RM107.1bil or US$26.1bil. Effectively, Malaysia’s net FDI for 2019 was actually at RM31.7bil or US$7.7bil. Hence, the narrative of the UNCTAD report only shows inflows, outflows and net amount to be only 23-24% of the actual amount reported by Bank Negara while the net FDI of US$1.35bil is less than 20% of what it actually was in 2019 as published by Bank Negara. The question then lies is there a gap between what is captured by UNCTAD and reported by us to the extent it skews investors’ perception of Malaysia’s ability to continue to be a magnet for investments in the region?

Looks like there is more than meets the eye when it comes to FDI numbers, depending who is reporting. 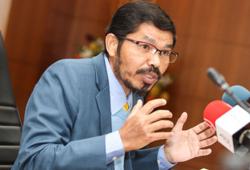