Genting Malaysia is asking some employees to agree to a temporary reduction of 15% or 20% in basic salary based on their ranks.

. is planning another round of salary cuts as it seeks to slash costs amid the prolonged coronavirus pandemic.

. that’s controlled by Malaysian tycoon Tan Sri Lim Kok Thay, is asking some employees to agree to a temporary reduction of 15% or 20% in basic salary based on their ranks, according to an internal memo dated March 1 seen by Bloomberg News. Some workers are being asked to take one day a week of no pay leave.

The cuts will be in effect until May, according to the memo. Senior management have voluntarily agreed to waive 20% of their salaries for the same period, it said.

This is the second time since the start of the pandemic that the Genting group has had to cut staff compensation. In April, the conglomerate led by parent Genting Bhd. announced its first group-wide salary reduction since its founding in 1965 after the pandemic roiled its casinos, cruises and resorts.

A representative for Genting Malaysia didn’t immediately respond to requests for comment.

Malaysia’s renewed movement restrictions and border closures imposed to rein in the spread of Covid-19 infections forced the group to shut its local operations again on Jan. 22, and tourist traffic to its hilltop resort in the state of Pahang is likely to stay subdued even after the recent rollout of vaccines, according to the memo.

Resorts World Genting reopened after the government eased movement curbs that forced it to shut for more than three weeks. Still, Genting Malaysia said it remains cautious on the near-term prospects of the leisure and hospitality industry, according to an exchange filing on Feb. 25.

"We need to control Resort World Genting’s cost base to ensure the sustainability of our business and to help protect as many jobs as possible,” Lee Choong Yan, Genting Malaysia’s president, chief operating officer and executive director, said in the memo. - Bloomberg 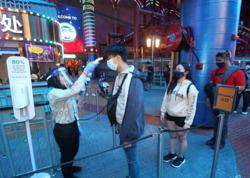