The move struck fear on Wall Street, which has been begging regulators to halt recent efforts by retailers and startups to begin offering core banking products to millions of consumers.

“These are substantive hires that should serve as an unambiguous signal of Walmart’s seriousness regarding its fintech foray, ” said Isaac Boltansky, an analyst at Compass Point Research & Trading.

“The regulatory moat that has shielded traditional commercial banks is steadily evaporating and the competitive risks are profound.”

To lead the effort, Walmart plucked Omer Ismail, a longtime veteran of Goldman Sachs who was a key architect of the lender’s consumer efforts in recent years. Ismail will bring along David Stark, who inked Goldman’s partnership with Apple Inc and oversaw its tie-ups with JetBlue Airways Corp and Amazon.com Inc.

Ismail’s hiring could be a precursor to Walmart filing an application to become a bank of its own following a Federal Deposit Insurance Corp rule late last year that paved the way for non-financial firms to seek banking charters.

Banks have been adamant that these new charters for so-called industrial loan companies allow firms to enter banking while escaping the capital and other liquidity demands they are forced to follow.

Forays into finance may help the retailer bolster its profit after contending with higher costs related to Covid-19, employee wages and supply-chain improvements.

Its shares are down about 10% this year, even after it did well in 2020 during the pandemic, benefiting from investments to spruce up its online business in recent years.

Chief executive officer Doug McMillon has begun to tease some of his ambitions, telling analysts just weeks ago that customers have been asking the retailer to offer affordable financial products and that he wants to find ways to “monetise” the retailer’s vast data.

With more than 150 million customers and 5,300 stores across the United States – many of which are open 24/7 – Walmart would instantly have a consumer base and network of branches that would rival those of JPMorgan, Bank of America Corp. and Wells Fargo & Co.

The goal is to “monetise their most valuable asset – the frequency and relationship they have with customers across the globe, ” John Tomlinson, an analyst at M Science, said in an interview. The research firm estimates the average person goes to Walmart’s stores or website about 30 times a year, almost double the number of visits received by rival Target Corp.

“Anything that drives a deeper relationship with their core business, which is selling stuff to consumers, is their number one goal, ” Tomlinson said. — Bloomberg 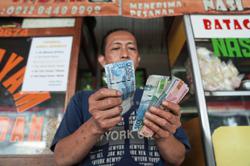