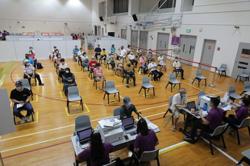 SINGAPORE (Reuters) - Singapore will set aside a further S$11 billion (US$8.31 billion)in a COVID-19 support package this year, its finance minister said on Tuesday, extending last year's unprecedented fiscal response to the pandemic.

The government had last year committed nearly S$100 billion (US$75.55 billion) in support measures to cushion the impact of the coronavirus outbreak over five budgets.

"My new year's wish is to have one budget," Finance Minister Heng Swee Keat said at the start of his budget speech, as he announced more spending for the hardest hit sectors such as aviation and tourism.

He also unveiled multi-billion dollar schemes to transform the economy and issue debt to fund large infrastructure projects, while raising petrol duties and reaffirming plans to hike its sales taxes in coming years.

The overall budget deficit for the 2020 financial year reached $64.9 billion, or 13.9% of the gross domestic product, the largest since the city-state's independence. It projects an overall deficit of S$11 billion for 2021.

Singapore's small and open economy is expected to expand 4% to 6% this year, bouncing back from a 5.4% contraction in 2020, with the city-state having largely brought the outbreak under control and rolling out its vaccination programme.

"The government is providing the necessary support to those who still need," said Song Seng Wun, an economist at CIMB Private Banking, adding the budget represented a return to "semi-normal."

Having taken billions of dollars from its reserves to finance its relief schemes, Heng said the wealthy island-state would need to balance its books, including by raising goods and services tax (GST) between 2022 and 2025.

Following in the footsteps of other countries, including Australia and the European Union, Singapore will also extend GST to low value imported goods from 2023 as more consumers turn to e-commerce.

To speed its recovery from the pandemic, the government plans to allocate S$24 billion over the next three years for economic transformation measures such as redesigning jobs and help businesses innovate.

He said Singapore was already investing in a range of innovative schemes including a software system that can verify COVID-19 test result certificates and vaccination records, an endeavour to help to revive air travel.

Singapore has been trying to come up with strategies to fight the impact of climate change, including by encouraging electric vehicles.

As part of those efforts, the country plans to issue green bonds for some infrastructure projects, having eyed S$19 billion of investment needs.

"Unlike COVID-19, which was a sudden and sharp shock, climate change is a gradual and intensifying risk, year by year," said Heng, who is also deputy prime minister.

The issuance of green bonds will also help the country deepen the market liquidity for such instruments and enhance Singapore's status as a green finance hub, he added.

He also announced a plan to issue debt to fund long-term infrastructure projects more generally with a cap of S$90 billion over the next 15 years. 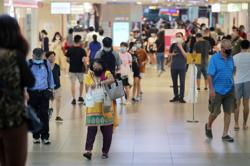