KUALA LUMPUR: There has been a disparity between crude palm oil (CPO) prices and local plantation counters, which is possibly affected by the environmental, social and governance (ESG) criteria resulting in lower interest and valuation for the plantation sector.

According to brokerage firms, planters’ share prices remained muted despite a rally in CPO prices.

This is because the market expects the price of CPO to weaken in the near term although the current high CPO prices are sustainable, said PublicInvest Research.

Meanwhile, UOB Kay Hian Research said Malaysian plantation companies’ stocks were “trading sideways” since November 2020 compared with the stock prices of planters in Singapore and Indonesia, which which have risen between 20% to 30%.

“We reckon that this is mainly due to the concern about ESG issues affecting Malaysian companies, ” the research house added.

For this year, UOB Kay Hian is keeping a market weight recommendation on the plantation sector with its CPO price assumption at RM3,000 per tonne.

“In the fourth quarter of financial year 2020 (Q4), all plantation players except IOI Corp Bhd

will report stronger production on a yearly basis.

“Nevertheless, we believe the impact of weaker production would be offset by the stronger CPO prices, ” it said.

However, PublicInvest Research expects CPO prices to weaken after March when production starts to pick-up.

Given the bearish data, CPO futures rose RM54 per tonne to close at RM3,626 per tonne on Feb 10 likely due to the release of strong recovery in export figures for the first 10 days of February.

In line with its peak-to-trough production study, Kenanga Research also forecasted a 12.2% m-o-m production to rise to 1.26 million tonnes in February.

The research house believes India’s recent policy changes on import duties are “detrimental towards CPO’s competitive advantage against rival oils and would harm demand for CPO.”

However, there was no change to the import duty on crude soybean oil and crude sunflower oil, which remained at 38.5%.

Kenanga Research also noted that Malaysia is also likely to lose market share in terms of the exports of refined palm oil products given Indonesia’s refiners’ advantage from the current export levy and tax structure.

“Additionally, with the CPO futures curve in backwardation, it essentially discourages immediate stockpiling activity given lower forward prices, ” it said. 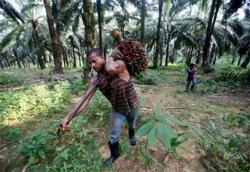