Rakuten Trade Sdn Bhd research vice-president Vincent Lau, (pic) for one, expected the short-selling to taper off in the coming weeks. He noted the recent selloff in glove stocks was due to fears relating to the sharp fall in the industry’s average selling prices (ASPs

PETALING JAYA: The downside risk, especially for glove stocks, is likely minimal because of the limited room for short-selling activities, as well as the spike in the number of Covid-19 infections.

Rakuten Trade Sdn Bhd research vice-president Vincent Lau, for one, expected the short-selling to taper off in the coming weeks. He noted the recent selloff in glove stocks was due to fears relating to the sharp fall in the industry’s average selling prices (ASPs).

“The short-selling of the glove stocks is likely to ease because of the new guidelines for the regulated short selling (RSS), and that the counters are trading at attractive valuations.

Earlier, the Securities Commission announced that the daily gross short position limit for approved securities would be temporarily reduced from 3% to 2%, and a new cap of 4% on RSS aggregated net short position would be introduced.

Former investment banker Ian Yoong said the share price of the top glove makers have stabilised as retail investors’ participation in large-cap glove stocks would be muted in the short term. He viewed that many retail investors were hit when glove stocks collapsed in the last quarter of 2020.

“The announcements of many listed companies jumping on the glove manufacturing bandwagon spooked investors. This gave the false impression that the barriers of entry are low, ” he said.

He reckoned the glove stocks as a group are still undervalued and that on average the counters were down 30%-35% from its high.

“Short selling is most effective when the underlying equities are perceived to be overvalued. It is too convenient to blame the price weakness of large glove stocks on short selling.

“There were many short sellers in Tesla in 2019. It managed to appreciate 695% in 2020, ” Yoong said, adding that the share price of Shandong Intco Medical, a glove manufacturer listed in Shenzhen, was not impacted by “fears” of earnings going over a cliff.

Among the factors that will drive the glove stocks are the timeline of the Covid-19 vaccine rollout that will take about 12-18 months to be fully administered to the global population, high ASPs of gloves and order books of the large glove manufacturers.

According to a report by MIDF Research, Top Glove saw the largest net money outflow by foreign investors of RM23.83mil last week. 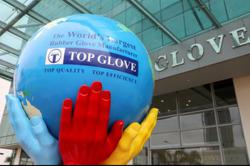