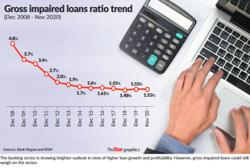 “We believe that Malaysian banks’ strong loss-absorption buffers will tide them over the Covid-19 crisis, ” RAM’s co-head of financial institution ratings Wong Yin Ching said in a statement on Friday.

KUALA LUMPUR: RAM Ratings expects the banking industry’s provision for allowance for impairments to remain elevated in the coming quarters as they continue to adopt a prudent stance.

The eight banks’ gross impaired loan (GIL) coverage (with regulatory reserves) and the industry’s common equity tier-1 capital ratios stood at a robust 114% and 14.6%, respectively, as at end-September, it said in a statement.

About half of their impairment charges in 3Q were pre-emptive actions, either through management overlay or macroeconomic adjustments.

As a result, the average credit cost ratio of the eight banks stayed lofty at 81 bps in 3Q (2Q: 91 bps). The ratio was, however, slightly lower quarter-on-quarter due to some earlier lumpy overseas impairments.

“We believe that Malaysian banks’ strong loss-absorption buffers will tide them over the Covid-19 crisis, ” RAM’s co-head of financial institution ratings Wong Yin Ching said in a statement on Friday.

With a large proportion of loans on repayment moratorium, the Malaysian banking industry’s GIL ratio hit a historical low of 1.38% as at end-September 2020 (end-December 2019: 1.53%).

While the ratio is unlikely to ease much further, it is envisaged to be upheld by the targeted repayment assistance (TRA) programme, which came into effect after the expiry of the earlier automatic six-month moratorium in September.

The TRA is applicable to individuals and SME borrowers, and takes the form of a further three months’ payment holiday or reduced instalments for at least six months (including automatic approval for B40 individuals and micro SMEs).

“Based on the latest available data, about 11% (ranging from 8% to 15% for individual banks) of the eight local banks’ domestic loan portfolios are under TRA or subject to restructuring and rescheduling.

“This number may creep up as more borrowers request for financial relief in the coming months. The underlying asset quality will only become clearer after the relief measures have expired.

RAM also noted a strong recovery in net interest margins (NIMs) in the latest round of banks’ 3Q 2020 financial results, after the earlier slump in the industry’s profit performance.

The improvement was underpinned by the absence of sizeable modification losses (present in 2Q) and the gradual repricing of fixed deposits amid the aggregate 125bp of OPR cuts so far this year.

However, this is still below the trend average of 2.20-2.30%. While this indicator should still chart a slight improvement in 4Q, the full-year NIM is likely to underperform by about 15 bps year-on-year.