KUALA LUMPUR: The Government is considering new laws to regulate the gig economy and to protect the welfare of the gig workers.

According to the Economic Outlook 2021, a new committee comprising representatives from three ministries has been set up to formulate long term solutions to resolve various issues on the gig economy in the country.

The committee will also be looking for ways to create a win-win situation for workers and employers.

There are numerous issues and challenges, including the status and welfare of the gig workers, that need to be addressed before the gig economy becomes a source of sustainable growth.

There is still no specific regulation, law or guideline to protect the welfare of the gig workers except for the provisions under the Self-Employment Social Security Act 2017 [Act 789], which require self-employed to register and contribute under this scheme.

As they are not formally recognised as employers, they are not legally covered under specific labour provisions, such as the minimum wage, working hours limitations, paid annual and sick leave as well as unfair dismissal.

Unlike traditional employees, gig workers do not have financial safety nets such as pension and savings in the Employees Provident Fund.

A survey by The Centre (2019) indicated that nearly 60% from more than 400 of e-hailing and delivery drivers did not have savings for emergencies, and 59% did not have retirement or old age savings. 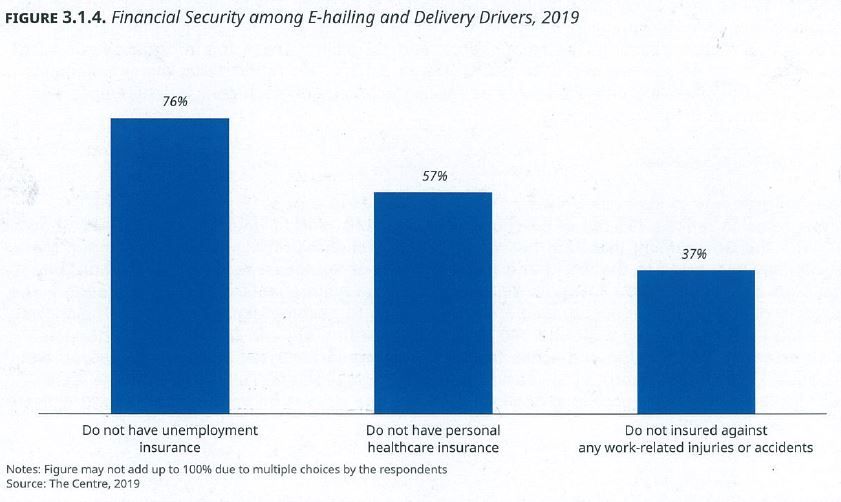 Nearly 40% of the workforce would be gig workers in the next five years, significantly higher than the global average of 20%. The rise of millennials and digital technology are the main factors contributing to the surge in gig workers.

According to the report, most millennials are no longer interested in the concept of secure and permanent employment.

Millennials grew up in the technological era, and so they are more immersed digitally.

As of August 2020, there were around 140 platforms providing gig and freelance opportunities with an estimated 540,000 gig and active freelance workers in Malaysia. Furthermore, there were about 190,000 gig workers providing services as riders and drivers on various logistic and delivery platforms in the country.

The Malaysia Digital Economy Corporation has embarked on the Global Online Workforce training programme, with an allocation of RM25mil to enable Malaysians to earn higher income digitally.

The government has also launched the myGIG Programme in June 2020 to support youths to participate in the gig economy by providing appropriate training and supporting equipment.

With the increasing number of graduates joining the gig economy, institutions of higher learning (IHLs) should move away from educating and preparing students for full-time employment.