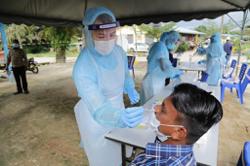 A marriage that had been planned to last 99 years and be very fruitful is coming to an end after just nine years.

is on the cards, given the approval by the Cabinet this week.

The LLA involves 350,733ha of Felda’s land that was leased out to FGV, which paved the way for the listing of the plantation group on Bursa Malaysia back in 2012. In return, FGV is obligated to pay Felda RM248mil per annum plus 15% of the operating profit from the LLA land.

With the imminent LLA termination likely soon, the question now is: How will FGV fare moving forward?

For the FGV management, the LLA termination will stand in good stead. FGV Group CEO Datuk Haris Fadzilah Hassan tells StarBizWeek that as the LLA provides for both termination and compensation procedures, FGV will abide by the agreement.

“Since FGV took a long-term view of the LLA, it invested heavily on replanting the old trees from 2012 to date. As crude palm oil (CPO) prices were also on a declining trend from 2012, the effect on income was amplified.

“In the long term, the investment in replanting would have definitely paid off for FGV and Felda now that CPO prices are beginning to trend higher, ” Haris explains.

On Oct 27, the spot CPO price hit a new year-to-date high of RM3,185 per tonne on concerns of lower-than-expected palm oil supply from Malaysia with new SOP restrictions in Sabah, the potential adverse impact on soybean supplies due to the La Nina event and stronger export outlook.

FGV has pegged its LLA compensation amount at between RM3.5bil and RM4.3bil based on internal assessment, which varies depending on the group’s financial performance for 2020-2021, as well as other factors.

On whether FGV will be comfortable having Felda as one of its major shareholders once the LLA is officially terminated, Haris adds that “this question will be for our (other) shareholders to decide.”

In mid-October, Perspective Lane (M) Sdn Bhd (PLSB), a company owned by Tan Sri Syed Mokhtar Albukhary, sent an expression of interest to “participate in FGV via an injection of plantation assets into FGV, for share consideration”.

If the deal goes through, analysts think PLSB could become the single-largest shareholder in FGV. Meanwhile, analysts are mostly neutral to negative on the LLA termination between FGV and Felda. MIDF Research analyst Khoo Zhen Ye in his report says: “We expect FGV’s total landbank to shrink by about 80% to about 89,000ha based on the removal of the 350,733ha leased land from FGV’s current total landbank of 439,700ha, most of which are oil palm planted areas.”

While there might be concerns on the supply of fresh fruit bunches (FFB) and hence crude palm oil (CPO) production to the group, he points out that FGV-owned mills are largely located near LLA land, and there is a higher chance that the FFB supplies from the LLA land would still be sold to FGV, albeit at a higher pricing.

Currently, the FGV group procures about 30% of its FFB supplies from the LLA land, 46% from Felda-managed smallholders and 24% from third parties.

“Nonetheless, we do not discount the possibility of any supply disruption arising upon the said termination which could be a bane to the group’s business operations and financial performance, ” adds Khoo.

So, will the LLA termination result in a more asset-light balance sheet and potential cost savings for FGV?

According to FGV’s management, the group incurs annual operating costs of about RM1.5bil for the maintenance and upkeep costs such as replanting, fertilising, staff quarters and plantation workers’ wages mostly on LLA land.

MIDF Research anticipates that the FGV group could potentially have a leaner cost structure should the LLA be terminated, as Felda would probably need to assume those expenses, in addition to the removal of the fixed lease payment of RM248mil per annum to Felda.

“We are of the view that FGV’s earnings could possibly experience less fluctuation or be less impacted by the fair value changes in LLA liability as well.

“These should be a boon to the group’s financial performance. The expected compensation could also boost the group’s coffers in pursuing more earnings-accretive and strategic investments, ” Khoo adds.

However, MIDF Research does not rule out any potential unfavourable terms for FGV or long-drawn-out legal proceedings during the negotiation process should the two parties kickstart the termination procedures (see also page 5).

At this juncture, the research unit will not make any changes to its earnings forecast on FGV and maintains its target share price at RM1.18.

“We expect that there will be no immediate impact on earnings, at least in the immediate term should the LLA be terminated in accordance with the 18-month notice period.”

MIDF Research notes that “all factors considered, we are maintaining our neutral recommendation on FGV”. The research unit also does not discount the possibility of an execution risk, which is dependent on the development surrounding the Covid-19 pandemic.

However, it does not rule out the possibility of an adjustment to FGV’s share price should clearer details on the LLA and the potential M&A activities be in FGV’s favour.

Adrian Kok, an analyst with Kenanga Research, says that in essence, the LLA termination is a negative for FGV.

He concurs that the total plantation landbank of FGV will be reduced to about 80,000ha. “Losing the LLA estates also means less control over FFB fruit quality and years of replanting since 2011-2012 is made fruitless.

“Although the compensation of RM3.5bil-RM4.3bil with an enterprise value per ha of RM10,000-RM12,000 versus other upstream planters’ EV/per ha of RM30,000 would allow FGV to search for upstream assets, this would take time and given the current high CPO prices, attractive and suitable deals are hard to come by, ” adds Kok.

On the other hand, the negatives could be partially mitigated as “the LLA estates account for about 30% of its annual FFB requirements and we believe Felda is likely to still sell FFB from the estates to FGV’s mills post- termination.”

Furthermore, the 18-month notice period for the LLA termination will give FGV some breathing room to make the necessary adjustments. Hence, the prospect of an injection of Tradewinds Plantation’s assets by Perspective Lane with a total landbank of about 160,000ha could also be timely, says Kok.

But he notes that Tradewinds’ estates in Sarawak, which are mostly on peat soil, could affect FGV’s RSPO certification.

Meanwhile, TA Securities in its latest report says not all is bad news.

“If the LLA is terminated and FGV receives about RM3.5bil to RM4bil compensation in cash, we believe the group will use the cash for M&As to beef up its landbank or other businesses to prop up its future earnings, ” notes the research unit.

It is neutral on the news of the potential LLA termination “as there is still a lot of uncertainty”.

For now, TA Securities is maintaining a sell on FGV with an unchanged target price of RM1.12 per share.

At the time of writing, FGV still has yet to receive an official notice for the termination of the LLA from Felda.