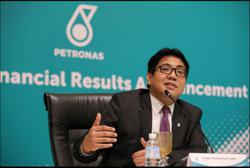 KUCHING: Sarawak Economic Development Corp (SEDC) has teamed up with Japan’s Sumitomo Corp and ENEOS to build a hydrogen plant in the proposed Bintulu petrochemical park.

The plant project, which has a planned capacity of 1,000 tonnes per year, is expected to be ready by 2023.

SEDC chairman Tan Sri Abdul Aziz Husain said the proposed hydrogen plant with initial 1,000 tonnes per annum capacity is scablable and can be expanded to thousands of tonnes if the needs arise to meet domestic and export markets.

“Recent development in the industry have shown that Sarawak could benefit from the international green hydrogen trade as we are not the first to venture into this area, ” he added. Last year, state-owned utility body Sarawak Energy Bhd, in collaboration with Linde EOX Sdn Bhd, launched South-East Asia’s first integrated hydrogen production plant and refuelling station in Kuching.

The plant uses water to produce the carbon-free hydrogen.

This represented the first initiative of the Sarawak government towards creating a hydrogen-based economy.

SEDC completed the acquisition of two parcels of vacant land measuring 405.6ha in Bintulu from Petrolchemical Hub Sdn Bhd, which is a wholly-owned subsidiary of Naim Holdings Bhd

SEDC has been tasked by the Sarawak government to spearhead the development of the land into a petrochemical park.

Mori said Sumitomo had been engaged with SEDC on the hydrogen plant project since last November.

He said based on preliminary studies, Bintulu is one of the best locations to produce green hydrogen.

Tomohide said ENEOS agreed to participate in the plant project with the strong support from Sarawak government, adding that his company had been working on hydrogen energy for many years through research and development.

Hydrogen will be the green energy of the future, according to Tomohide.

Abang Johari said the Sarawak government had asked the federal government to reduce or eliminate import taxes on vehicles which use hydrogen fuel.

Expecting the use of hydrogen-powered vehicles to pick up by 2023, the Chief Minister said the strategic partnership between SEDC and Japanese companies would pave the way for Sarawak to venture further into the hydrogen economic agenda which was progressively being pursued by developed countries.“Sarawak is aiming to leverage on the abundance of raw materials that we have, including the cheap electricity tariffs produced by our own hydroelectric dams which enable us to produce the hydrogen gas with cost effectiveness in mind, ” he added.