Genting bought MV Werften in 2016 but the sector has been among those worst hit by the pandemic, darkening the prospects for MV Werften’s 3,100 workers.

KUALA LUMPUR: Genting Hong Kong is set to get 193mil euros (US$227mil) from the German government for its struggling shipyards in the country, according to Nikkei Asia.

It reported that the payment to the operator of the Star Cruises, Dream Cruises and Crystal Cruises lines would allow work at its shipyards in northeastern Germany, grouped under MV Werften, to carry on to at least until March next year.

“We have clearly made headway. The federal government is bailing out MV Werften, ” said Harry Glawe, economic minister of Mecklenburg-West Pomerania, the state where MV Werften is located.

A decision on whether to grant Genting the full amount requested now depends on an assessment of the company’s overall prospects.

Genting bought MV Werften in 2016 but the sector has been among those worst hit by the pandemic, darkening the prospects for MV Werften’s 3,100 workers.

In August, Genting Hong Kong froze payments to creditors and said it was seeking a debt restructuring. 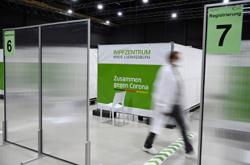