WASHINGTON: Asian equities were poised for a bouncy session on Thursday after U.S. stocks posted a second consecutive quarter of gains and safe-haven assets, including the dollar, were mixed.

Global investors spent the session digesting the rising number of COVID-19 cases and a chaotic U.S. presidential debate, while taking in better-than-expected U.S. private jobs data on the last day of a volatile quarter.

But they pared gains after Senate Majority Leader Mitch McConnell warned the sides remain "far apart" in their talks.

"Between the U.S. presidential elections in a little over a month, uneven economic data and uncertainty over the COVID-19 impact... we may just see a drift in equity market pricing into Nov. 3," said Peter Kenny, founder of Kenny's Commentary LLC and Strategic Board Solutions LLC in New York.

"Markets exhibited heightened volatility in Q3 – largely as a result of the COVID-19 pandemic. There was also uneven economic reports and data that fueled a degree of risk-off as we head into quarter end, much of which is offset today by window dressing."

Market participants were also digesting Tuesday's contentious U.S. presidential debate, where President Donald Trump and Democratic challenger Joe Biden talked over each other and traded insults as they sparred over the COVID-19 pandemic, healthcare and the economy.

But some analysts say the election is not the primary driver of markets now, but rather the level of economic reopening.

U.S. markets rose on Mnuchin's comments in the morning, but sold off when it became apparent later that the Republicans and Democrats were unable to compromise on a stimulus plan.

"Global investors may be pulling back from the U.S. as the election approaches and the political dysfunction in Washington is laid bare, but they also need to take into consideration that a weaker U.S. economy could presage a weaker global economy, which may drive investors to safe-haven assets" later in 2020, said Chris Zaccarelli, chief investment officer with Independent Advisor Alliance in Charlotte, North Carolina.

On Wall Street, the major indexes wrapped up September with their first monthly declines since March, when mandated shutdowns slammed the economy.

But of the 11 major sectors in the S&P 500,10 ended the session up, led by healthcare and financials.

The indexes also ended the quarter up, with the S&P enjoying its biggest two-quarter winning streak since 2009 and the Nasdaq posting its biggest gain for two quarters since 2000.

Still, there are plenty of potential challenges ahead for investors. Many are closely tracking the presidential election in November, wary the result may not be known immediately.

Bets on volatility through the end of 2020 in markets from derivatives to currencies and bonds may be expected, some analysts say.

MSCI's gauge of stocks across the globe gained 0.02%.

China's stock and bond markets, foreign exchange and commodity futures markets will be closed Oct. 1-8 for the Golden Week holiday. South Korea and Hong Kong markets are also closed on Thursday and Friday for holidays. 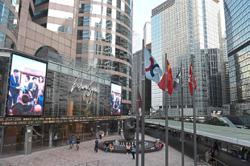